I think I'm starting to get the hang of this exercise business, well in as much as it seems to be growing on me and I don't actually hate it anymore. From my past experience with exercise I know that once I get on a roll I really begin to enjoy it eventually so I'm hoping I can keep going without anything putting the kibosh on my good intentions! And I really no longer have any excuse do I - no work, no kids, no husband! The biggest "worry" I have actually is the summer heat because I just hate it and want to crawl under a stone somewhere for at least six weeks - but we're not there yet are we!

After yoga on Monday I decided to take myself off walking as the weather looked like it might be forgiving for a little while, which indeed it was. So I took a 90 minute walk along the river Arve at Thyez, but sticking to the paved trails as it had rained a lot over the weekend and everywhere was pretty muddy. Then on Tuesday I went to my second yoga lesson of the week with my neighbour and really enjoyed this session. We've been doing quite a lot of "salutation to the sun", which I don't particularly like, but on Tuesday she had us doing "salutation to the moon", which I found more enjoyable - although I ached like billyo afterwards. Seeing me getting out of bed this morning was pitiful! Still, those aches only last as long as it takes to warm up a little and then I feel great. 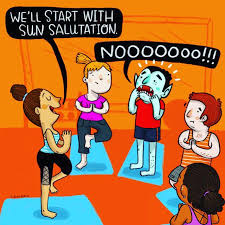 I found the above on Pinterest, although there are different variations, but of course the only person who looked anything like those photos is our teacher!! Still, if at first you don't succeed … That being said, my Monday morning teacher must be in her mid-40s and looks around 10 years younger, and my Tuesday teacher, I reckon, is in her 50s and while facially I would say she looks her age, her body is incredible - all "bendy", slim and toned! They are both great adverts for yoga, I can tell you! On the drive home my neighbour was saying that after a week "without" she starts to get stiff and miserable so I asked how she thought she was going to feel when the classes shut down for the summer. To which she asked if I would be willing to have a go at doing a yoga session with her a couple of times a week during the summer break! My, haven't we come a long way! And to think this is the lady I had to nag for two years to join me and now she can't imagine not doing it anymore! To that end, I also can't imagine "doing without" as I feel so great when I get my full quota of four different classes in during the week so I'm wondering if I should sign up for a third yoga class next year. I'll have to think about that though, I guess, as my friend warned me about over-scheduling myself during my first couple of years as a retiree!

I didn't go walking yesterday as we had our first snow fall of the year - can you believe that! Our first snow so late it's just unreal! And while it snowed fairly heavily in the afternoon and evening it was all gone this morning when I got up. I only hope the rain we had down here translated into snow up in the mountains as the skiing holidays are coming up shortly and this place will be heaving with kids on spring break! Anyway, I was feeling a bit lazy today and wasn't going to make the effort to get out walking but then I looked at my walking log for the year and realized I was so close to 100 miles in that I'd better get out there and start walking. So I went up behind the houses at the back of me and what I used to consider a complete walk took me just 45 minutes today (including uphill). Heck I must be a bloody wimp to have ever considered that strenuous, so I'm suspecting some progress is being made, however little! When I came to the end of that circuit I decided to head on out towards La Roche and added another hour to my walk and now, I'm delighted to say, I've hit 105 miles walked since 2 January. It isn't enormous by any means but it has all been "conscious" walking, spurred on by signing up to the FB challenge! And I'm loving it!

When I got back I saw that I'd received an email from a lady who runs the kiddies' craft club in the community hall where we have our sewing club. It's called the Association des Associations and there are about 20 different clubs run by the commune of Amancy. Hiking, zumba, yoga, photography, sewing, choir, belote (card game) and so on, which is quite impressive for such a small village. Anyway, this lady had got my email address from the clubs' info sheet and asked if I would like some patchwork books for the club. It's actually a sewing club, not a patchwork club (I'm the only one that does patchwork because I can't sew), but one of the younger woman asked me on Monday night if I would help her start doing simple patchwork as she loves the stuff I'm making!!! Yikes, frankly I'm rubbish at patchwork and usually have to do work-arounds because I keep messing up, but what could I say! I told her that I was learning myself but I would be glad to help her if I could. So I ran down to the community centre tonight and the email lady handed me about 30 books on patchwork, all in French (mine are mostly in English so not much use to the others) and it looks like we could well be taking off in another direction with the sewing club! And since eight of our members are new to the club this year it's been gratifying to see how friendly everyone has become - it's a nice bunch with no "difficult" members like we had last year (thankfully just one person). In fact, one of the younger women suggested we have a kind of pot luck at this Monday's sewing evening as she felt it was a shame to limit our socializing to just a Christmas dinner and an end-of-year get together. Nice huh! I have no idea what I'll make but I'm leaning towards a red velvet cake at the moment, although that could change any time between now and then!

And finally, seeing all the stuff in the news about the coronavirus bought back an incident that happened, I think, in 2003 during the SARS epidemic. Because the threat was classed as epidemic-level by the World Health Organization, they invited representatives of all the international organizations in Geneva to a meeting on how to deal with such an epidemic should the city be hit. The head of HR was invited and he asked me to go along with him! Me???? What the flip! You can't begin to imagine how I felt sitting in that huge room surrounded by all these eminent epidemiologists giving their opinions on such a serious subject in what seemed to me to be a language right out of Star Trek, although I was assured it was English! As we walked out of the room my boss actually said "Sorry, I should have introduced you to everyone but I never got the chance"!!!! Say what! I would have just died if he had 'cos, you know, me and Marie Curie weren't exactly like this: 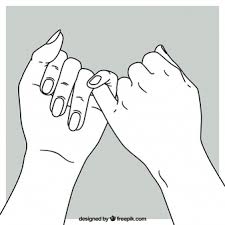 But, after the conference, they took us to see the underground bunker that they could use in the event of a mass emergency and that was fascinating! They can stock emergency supplies of vaccines and so on and everything else that would be needed to keep things running as normally as possible in the event of a life-threatening epidemic. So my embarrassing trip to the WHO meeting actually turned into a pretty interesting time for me, but it's just as well they didn't ask my opinion on any of the "meatier" issues isn't it! And an interesting fact (and this'll show you how forward-thinking the Swiss are). All homes built after a certain date in Switzerland - although I couldn't tell you what date - have to have an emergency bunker/sleeping cell to be used in the event of a war/nuclear incident. When I first moved to Geneva in 1980 I had a lovely large studio and in the underground area where the washing machines were we all had what they call a cave, or storage area - you know, somewhere to keep your skis and bikes and so on. The doors at the entrance to these caves were one foot thick solid metal and could be closed up in the event of an incident, with the doors to the individual caves lifting off to be used as beds for the duration. Those weren't particularly sophisticated times either by today's standards so I can only imagine how much they have progressed in their preparations in the 40 years since! It sure beats what I think would be the British alternative of sitting in the middle of the road with a bottle of whiskey singing Auld Lang Syne and hoping the nuke lands directly on top of you doesn't it!