I got a message from Jordan at 2.30 a.m. this morning to say that they had finally made it to the front of the queue at the British Airways service desk and they had provided them with a voucher for a room for the night at the Premier Inn and breakfast! They didn't have their luggage but were just glad to finally get a room and a few hours rest after such a long and stressful day. So I could finally relax a bit once I knew they were sorted. I knew I wasn't going to sleep anyway until then because I was more worried in case they didn't have a "decent" credit card than anything, but with BA paying for their overnighter there was less to worry about and I could finally go to bed!

Turns out that the big problem at Heathrow was that all the computers went down because of the storm. People couldn't use electronic tickets, although Jordan and Jen had printed theirs also, but the information boards indicating which gates people should go to were also down (which is why they missed their flight) and ground staff ended up having to write boarding gate info on white boards - but by this time it was too late for them as their flight had already left! 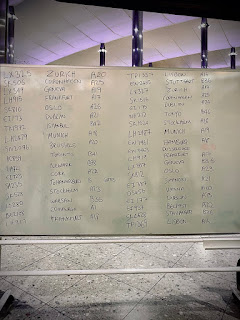 They called me this morning while they were having breakfast (put a "full English" in front of those two and they are happy) and told me they had to go back to the airport to sort out rebooking their ongoing flights - and this was the queue waiting patiently to get to the British Airways information desk when they arrived!

Still, within a couple of hours they got to the front of the queue and while BA could get them out today they could only get them as far as New York or Chicago and would not be responsible for onward flights to Pittsburgh, so the kids decided to opt for the direct flight tomorrow (Tuesday) in order not to have connecting flight worries again. That has meant spending another night at the hotel - which they were okay with - and even though central London is only 45 minutes away by train they decided to give it a miss and just "chill" around the village where the hotel is located as they were both tired. So they're now all checked in for their flights tomorrow (although I'm not quite sure where their luggage is), and will hopefully get a good night's sleep tonight.

I've been watching the news a lot today too and Storm Dennis coming hot on the heels of Storm Ciara, the UK has been pretty battered, with severe flooding now also hitting the more central areas. I feel so bad for those affected because even though they have put in flood defences, the incredible amount of rainfall hitting the UK in the last week has meant that so many of those flood defences have been breached! What a nightmare!

This video of an Etihad flight landing at Heathrow this weekend is doing the rounds at the moment and my God, if I ever end up flying Etihad I want this pilot. He landed that thing sideways!!!!!!

My ex phoned me a short while ago to make sure I was up to speed with the kids as I had been out this evening. He was saying that while February isn't the ideal time for a visit to Pittsburgh they have enough things in mind to keep the kids entertained. Amme (grandma) doesn't know the kids are going so my ex is having "everyone" over for dinner on Wednesday night in order to spring the surprise on her (she hasn't seen Jordan in seven years)! I can just picture it now. She is a great story teller but by golly she goes round the Wrekin with her stories, so when I saw this picture below, if you change "how I tell a story" to "how Amme tells a story" you'll get an idea of what Jordan and Jen are in for! 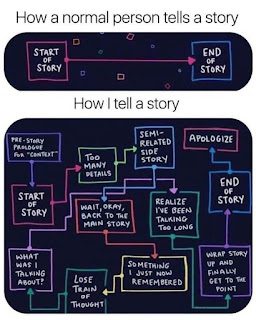 And finally I haven't got much walking in in the last week, more out of laziness than anything as the weather, up until now, has been pretty good. But I have to say some of the people on the "1,000 Miles in 2020" walking group are really funny. One lady posted the picture below during Storm Dennis with the caption saying "hubby asked me if I wanted to get down and dirty"!!! She said she lived in hope ... 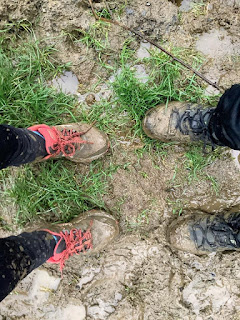