I know I shouldn't look on FB but sometimes I just do (and then usually wish I hadn't). My delusional/insane/demented ex just posted words to the effect of "crying a few tears while slagging a man off and ruining his reputation - she should be subject to the same grilling as him" (in respect of the Kavanaugh/Ford drama), and then getting to see all the "hoorah" comments from his half-wit "friends" makes my blood boil. I don't know who is telling the truth as I wasn't there but she comes over very well and I have personally been on the receiving end of men like that who think with their dicks. You know what they say about some men - "there's only enough blood in the male body to support one head, and the one above the shoulders rarely wins"! Kinda like the guy who once said to me as a young girl that if I wanted my contract renewed I should "know what to do"! Even then I had the presence of mind to say "yeah, go straight to Personnel" and his "little member" shriveled before my eyes! Yay me!

The most tempting thing to me was to scan a copy of the domestic violence judgement I have against my ex and post it on his timeline, but of course it's best not to rise to the bait! I don't know if he is delusional or is still telling himself that "it never happened" (it did, frequently, and I had the bruises and the court judgement to prove it). God help us all, is all I can say!

On a slightly more pleasant note, I finally got my new balcony railings and side gate put in while I was away. Sylvain, the young genius who did it for me, had warned me in advance that it would take ages as he had so much work (good for him). I'd say it's slightly OTT but I love it anyway, especially as I back on to a dairy farm, and if I do find it a bit "too much" I can actually unscrew and remove some of the animals. I sent a photo to my friend, "minimalist Steve", in England and asked if it was OTT, to which he responded "just a tad"! So now I know I got it right then! 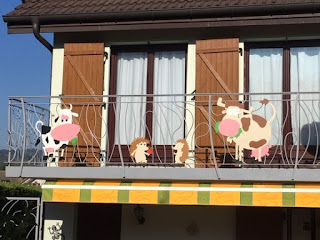 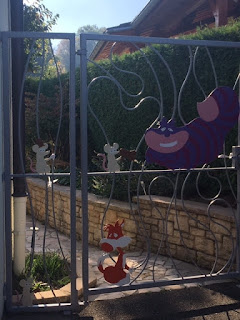 More on Sicily tomorrow (I've just got to get my resignation letter in)!