Our last couple of days in Sicily were spent visiting the ancient Greek town of Agrigento and the Valley of the Temples. The remains here were quite spectacular with the Temple of Concord and the Temple of Zeus being incredibly intact - the Temple of Zeus is also the largest temple built by the Greeks. As we were being given the background at the Temple of Zeus there was a modern day section of the "Oracles" - basically screaming women who predicted the future. I (and many others) didn't like it at all (call it art, call it what you want but it was still just a bunch of screaming women to this pleb) but our guide was saying that they believe there had been sulphur and other gas emissions in the area and it is quite possible that the "Oracles" were driven crazy and given to screaming as a result of being subjected to these gasses. Now that is interesting. 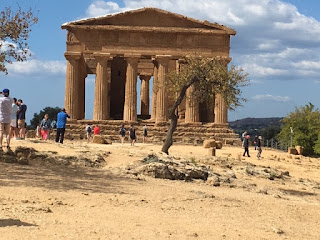 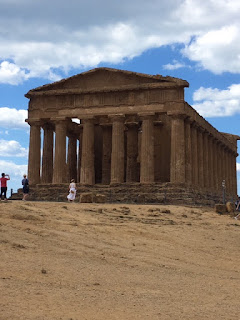 Our last day was spent in the beautiful town of Cefalú, a lovely fishing port dominated by one of Sicily's finest Norman cathedrals. Now this town I really loved. I don't know why, but it had so much character and was just so pretty. 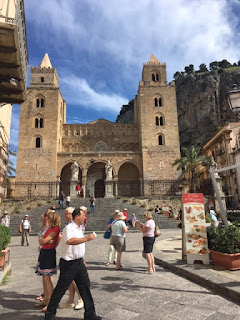 There were small, pretty beaches - uncrowded - and loads of interesting back streets to explore. All in all a lovely way to end our stay.

As for our group, they were pretty nice. Well, I have usually found my travelling companions to be pleasant, to be honest. Of course there are always a couple that everyone tends to avoid like the plague but all in all they were a nice bunch. There was an 80 year old lady who was not a widow but who was the carer for her husband who suffered from both Alzheimer's and Parkinson's. The poor thing occasionally took a short break in order to get away from the constant strain of being a never-ending care giver. She did it willingly, of course, but 24/7 that has got to be so hard. Her name was Marion. Now I have a sister called Marion and a sister called Brenda, and I'm pretty sure I called her Brenda right up to the last day - but she didn't bat an eyelid! She was quite bent over and just a diddy little thing to begin with but she and I boogied on my birthday like there was no tomorrow. When it came time to doing The Twist and we had to go "round and round and up and down" she laughed and said she had a head start because she was already that much nearer the floor! What a lovely lady she was! There was also a very distinguished older chappie who was a former RAF fighter pilot. It was his first trip since losing his wife and he was quite quiet to begin with - very reserved - but even he came out of his shell a little by the end of the week. As you can see, I love my trips and I tend to really enjoy these people's company so maybe our Tour Manager was right - I might like to consider applying to become a Tour Manager myself at some point. The area I live in is a big draw for these kinds of tours - be it in the summer for the lakes or the winter for the skiing. Since I know the area and speak the language I would obviously have an advantage, although the Tour Manager is not the local guide, he just makes sure everyone gets on the right bus and nobody leaves their false teeth in a glass by the bed! Moreover, I like people (well most of them and can usually fake it till I make it with the others), so I am seriously giving it some thought - maybe next year after the wedding. Who knows, the world is your oyster isn't it!
Posted by Treaders at 15:50