Before I post about the next part of my trip to Sicily, this morning I had my last "MOT" physical before retiring. I think I had mentioned before that I was getting pain in my jaw, down my neck and into my chest and since this can be symptomatic of a heart attack I decided to get it checked out. I came back with a clean bill of health from the cardiologist/hospital and also from the gynae, who nevertheless decided to send me for another mammogram just to be sure since I take HRT. Well for the second time in a row I got a male technician (which I found weird last time) but at least this one was taller as the last guy's eye line was just level with my nipple as he was trying to get my boob squashed between two transparent discuses! Sweet (or not). It is weird though staring down to see your boob looking like a pitta bread with a nipple isn't it! Still, at least that's over and done with. I had this done in the clinic where I had my second son and yet again I marvel at how spotlessly clean (and luxurious) this clinic is. Ok, it comes at the price of very expensive medical treatment in Switzerland but it really is spot on! I'm glad to say all is well, so I can only think the chest pain was coming from stress caused by grinding my teeth and my interminable commute - but that too will soon be sorted so what's not to love!

After a short wait the lady radiologist came in to do more tests and give me my results. I had had her before and recognized her South African accent so when she asked me about a couple of red blotches on my chest I told her I had been bitten by mosquitoes in Sicily and cured the occasional spot of boredom by scratching them! She just laughed and started asking me about Sicily and became more and more interested when I told her it was a "solos" holiday - one of many! So then she started asking me about all my other "solos" trips and seemed very impressed. She told me that she was also divorced and her dream was to give up her job, get herself a camper van with wifi and become a "mobile radiologist"! Wow, that sounds pretty impressive doesn't it! She had been looking into a convoy trip across the desert in Morocco where campers are provided for you. You don't have to travel in convoy in actual fact, but the guide is always the last one to head through and she was really excited about the prospect, although she said she would be renting a van solo as she didn't want to share with anyone (I can understand that. I'm pretty sociable but need my own space also). So I told her that we had had a camper for 15 years when we were married and that the ex had got the camper in the divorce while I got the kids! She just roared laughing, but when I told her I had bought myself a camper after the divorce she became more interested. To be honest, I think my camping days are over as not having anyone to travel with at the time it wasn't so much fun, but we just yacked on and on and I swear my appointment overran by about 30 minutes! The upshot of all this is I walked away with her phone number and gave her mine. I told them at work that I had been for a mammogram and had come away with the doctor's phone number - haven't told 'em she was a "she", not a "he"! Let them assume what they want!

Anyway, back to Sicily! After three nights in our first hotel we started making our way to the resort of Campfelice di Roccella, further north towards Palermo, where we would be staying for the rest of our trip. On the way there we stopped at another UNESCO World Heritage Site - the 4th century Roman Villa del Casale - a fascinating and complex collection of Roman mosaics. To be honest, we were unlucky in that it was a bit crowded (and pretty hot) but it was definitely worth it - such amazing mosaics and of course having a guide explain them was really worth it. You get so much more out of it with a local guide. 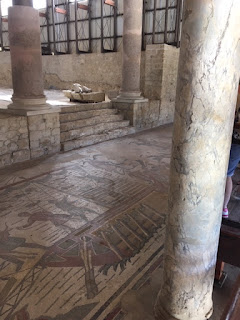 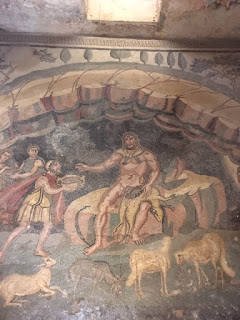 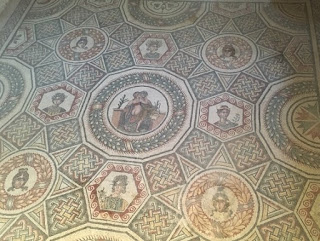 On the way there we visited Montreale and its stunning cathedral square. Some places, though, just had me start humming the theme from the Godfather in my head! You could really feel the atmosphere. We never did get to visit Corleone (Marlon Brando's namesake in the Godfather) but there was definitely an "ambiance"! To be fair though, our guide was saying that while the mafia still exists, of course, (as it does everywhere sadly) it is nowhere near as pervasive as it was in the 1980s and 90s, as a result of the murderous attacks on the likes of Judge Giovanni Falcone, the anti-mafia crusader who was blown up in his vehicle in 1992.

I tell you, there was just so much to see that we were on the go constantly, so I suspect the rest will have to wait until another day! But would I recommend Sicily for a visit? Absolutely!