Well it's taken me a few days to get round to writing a bit about Sicily but things have been a bit "hectic" here trying to dodge the hit squad about my having handed in my resignation!

I flew to London on the Friday to spend the night at the airport because our flight out to Sicily the next day was at some God awful time - 06.40 a.m. I think. Nothing like getting up at 3 a.m. to stand waiting for a bus back to the terminal at 4 a.m. but I made it. Knowing Gatwick Airport a bit better though, next time I will simply stay at the hotel in North Terminal as it is about 100 metres from the airport and it only takes maybe three minutes on the shuttle train to get to South Terminal so one less thing to worry about. On a slightly related note I have already got back to the travel company to say that it is ridiculous to have to fly to the UK in order to fly back east - it seems I'm not the only one because they have now "seen the light" and will be allowing people to make their own travel arrangements in future. Score then!

We were met at the airport in Catania by our Turkish guide, Ayrtan, (yes Turkish, to show us round Sicily) and what a treasure he turned out to be. I have always had good guides on my trips to be fair, but some are more fun than others and I think he got it just right. He paced himself well and was very good with everyone but, as I later found out, he also loved to boogie!

We checked into our hotel about an hour from the airport - a very large room in my case with a lovely view. Very nice too. I like a bit of luxury! And very sweetly, on my birthday, Ayrtan arranged for a bottle of plonk to be placed in my room! Now that's the way I like to celebrate! 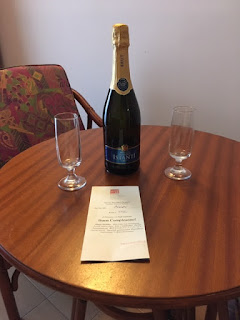 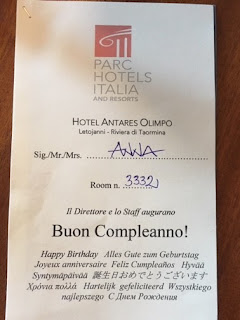 Next day it was up early (well, every day it was "up early and off" to be honest) to visit Mount Etna. Mounta Etna is a volcano and part of UNESCO World Heritage. It stands at 3,329m so we had to take a cable car up and then a 4x4 up to the top after that. To be honest (and I know I'm going to sound like a peasant) but it just seemed to be a lot of black sand to me! At the top there was a very small burst of steam but other than that it was very quiet, thankfully, because when those babies wake up you really hope they wake up in a good mood!

Then later that afternoon we set off to visit Taormina - a beautiful old town with a Greco-Roman theatre. A new friend and I set off to find the theatre but somehow managed to get lost in the back streets. I reckon we came within about 100 metres of it in the end but had to hot foot it back to the bus. Not to worry of course, because Sicily isn't exactly lacking in ancient relics (most were on our bus - in which group I now include myself of course)! 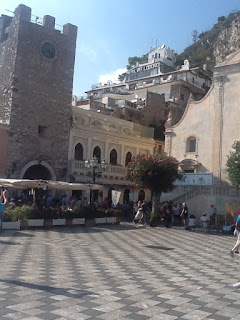 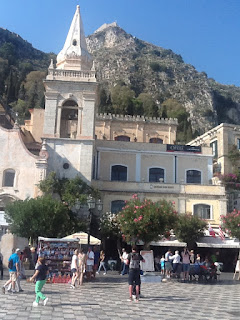 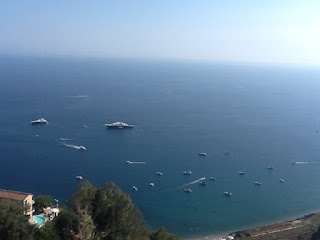 The next day it was up early (again) and off to visit Syracuse and the old town of Ortigia with its Greek theatre carved into the hillside (see, I told you there were plenty of "old relics" to see)! 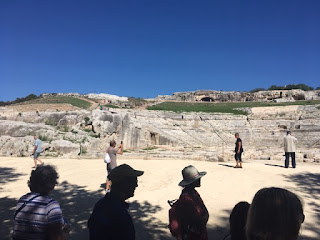 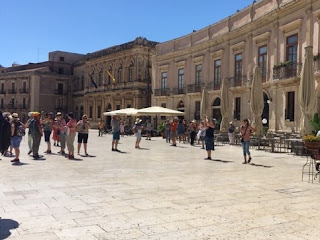 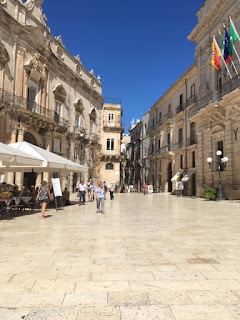 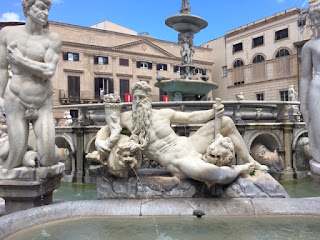 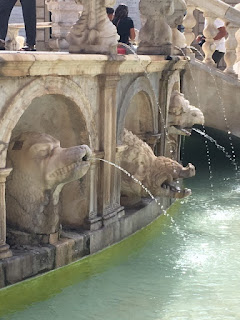 I love looking at old buildings and ancient theatres, but I must admit I don't take too much in regarding dates etc. I mean, there's just too much to take in unless you want to make it a full-time job or have a burning interest in it. Suffice it to say Syracuse was just stunning but .... and this is where my interest really does get peaked ... inside this lovely Cathedral is buried the body of Father "Pino" Puglisi, a brave Catholic priest who set up schemes to try to get the young people of Sicily to pull away from the mafia and take another road. He knew the mafia would come for him eventually, and that they did. He was shot on his 57th birthday in 1993 but apparently the young man who killed him could not live with what he had done and so handed himself in to the authorities. He is now serving life in prison!  More to follow tomorrow.