Well my cookery course last night was just wonderful. Probably the best course so far (they aren't all good). Since I finish work at 17.30h and the course started at 18.30h I decided to walk across town, figuring it would take me about 40 minutes and I would have time to grab a coffee beforehand. What I hadn't banked on was how cold it was walking along the lake front. Crikey, it was freeeeezing! I made it in 35 minutes but I'm sure having icicles dangling off the end of your nose will never be a good look on anybody!

The group was made up of the lady instructor and nine pupils - six women and three men. In fact, one (presumably married) couple came along with their 25-ish-something daughter, which I thought was a lovely way to spend an evening together. The first dish we made was a starter of Thai ravioli stuffed with chicken and shrimp. The teacher had us all doing the cutting and smushing and so on and then all rolling our own ravioli parcels. I think she overestimated a bit as we ended up making 64, but served with sweet chili sauce they were absolutely delicious! 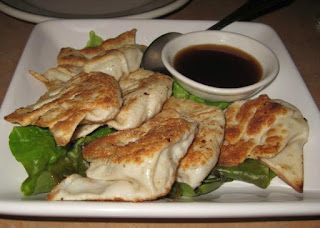 After that she had us cutting up rump steak and all kinds of other delicious ingredients to make Thai beef with basil, and again it was fabulous. She was very good in that she had us all doing the preparation and then we all  had to make our own beef dish in the wok, while she stood by giving instructions and/or encouragement. Just as a "by the way", it was the first time I had ever used coriander (cilantro) root on its own - not the leaves, just the roots. You live and learn I guess. At the end of the class we all sat down to eat our culinary creations and this being Switzerland there were a couple of bottles of wine on the table too! So we got to enjoy a lovely home-made dinner and then take the leftovers home too.  What's not to like! 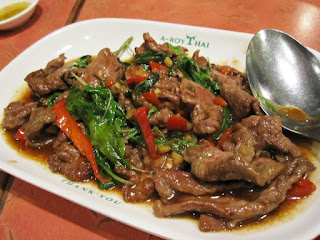 As part of this same course we have another class next week where I think we will be making Pad Thai and - if I remember correctly - chicken soup with coconut milk. Lovely! I generally find that I am too tired to want to commit to an ongoing course but doing these one or two-off courses is just perfect for me.

Since I was on my own I didn't want to hang about too long before leaving for my bus because, sadly, as a sign of the times I am a little nervous making my way back to a pretty empty parking lot at 10 in the evening. But, everything was fine, and since the parking lot is right  next to a sports centre there are generally quite a few people about. So marks out of 10 - a definite 10 for this course.

On a totally different note, I see that the UK has just named it's first ever "Minister for Loneliness", and while it has a rather comic ring to it I'm glad to hear that some attempt is being made to address this dreadful problem. Of course, it was an issue dear to the late MP Jo Cox (who was murdered by a lunatic with "mental health issues"). I hope they really do achieve great things with this initiative because it seems to me a problem that shouldn't really be that difficult to solve. I wish I could be named "Minister for Loneliness" - my ideal job I think, but until then I guess I will just have to keep chattering on obliviously to all and sundry.