A rather nice weekend!

Well we finally got some nice weather this weekend after what seemed like forever and a day of rain. I noticed that the crocuses and daffs are starting to come up (they come up later here than in Geneva because of the altitude) so while I know spring is a while off it really feels like it's on its way. My favourite season!

I spoke to my ex OH (the friend I was seeing for six years after my divorce) and he mentioned that he wanted to go see the new Gary Oldman film, The Darkest Hour, so I suggested we go together. And you know what, it was really nice to spend some time with him again after splitting up over two years ago. I know it will never work out between us in the long run but it is nice to have remained friends. What's more we both enjoyed the film. I think Oldman is a wonderful actor (loved him in Dracula) and he managed to portray a moody and grumpy Churchill with a real twinkle in his eye. Loved it. And the make-up/prosthetics!!!! Wow, just wow. What talented artists those people are to be able to transform Oldman into an absolute replica of Churchill!

I saw an interview with Oldman recently and he was saying how ill he became after filming due to having to wear the prosthetics and the fat suit day in and day out. Said it took about four hours to get him kitted up as Churchill but it was definitely a success. Then he said having to smoke all those cigars while filming made him as sick as a dog as he had given up smoking years ago, so while everyone was toasting the new year in he ended up spending a couple of days in hospital getting a colonoscopy and getting himself sorted out. Still, the end result was definitely worth it as it was a great movie.

Then on Sunday my friend and I decided to walk into town to the 1940s-1980s vintage fair. To be honest it was a bit small and not really what I was expecting but there was quite a bit of 1950s paraphenalia, a few bikers, loads of 1950s cinched waist dresses (I wish) and some rather nice jewellery but not the kind of stuff that suits me, unfortunately. I did buy myself a nice red polka dotted head band (I wear them when working in the garden) - oh the expense!! and bumped into my kids on the way out just as they were arriving.  I took a picture of them at the entrance then put the headband on my oldest son (but promised him I wouldn't put that photo on Facebook). Still he did look rather cute! 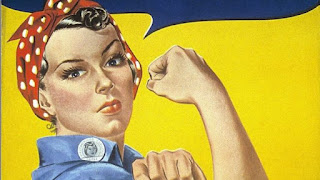 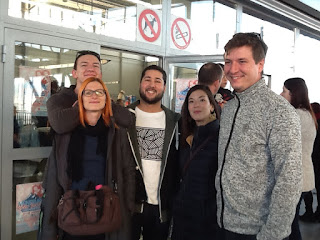 So while the fair wasn't that great at least my friend and I got out into the sunshine and managed to fit in two 45-minute walks to boot. Not bad considering (apparently) Geneva was shrouded in cloud all day. Happy days!