Time to dust off the arc!

Crikey, I swear it hasn't stopped raining since Christmas Day. Well we have had maybe two days where it didn't rain but other than that, I think I'm developing webbed feet it's rained that much. Still, growing up in England you do kinda get used to it so I don't find it depresses me as much as some of my colleagues. In any case I'll take rain over snow in town any day. They have forecast slightly better weather during the week - up to 13 degrees on Wednesday and bright sunshine so I guess there is that to look forward to, if only briefly. Hindsight being 20/20, it's probably a good job we neighbours dug up our back gardens at Easter and laid drainage trenches - 'cos they're certainly being tested at the moment.

Since I need to get back to the "I have to lose weight malarky" I actually trudged up to the gym at lunchtime.  Trouble is, when it rains the gym is packed as people don't want to go out running. But I made it and I have to say I always feel so much better afterwards, even though I only do a namby pamby little stretching routine. It does my back and neck the world of good! Just gotta keep it up now I suppose.

So what else is new. Not a lot really. I saw on the UK news last week that somewhere in the south of England (I forget where) they have opened a "menopause cafe", where women can get together to commiserate with each other over the trials and tribulations of the menopause. Not sure I would go to it but even so menopause did come as a bit of a surprise all the same. The biggest thing I guess was the weight gain (around 16 kg - about 35 lbs, I would guess) and at one point I felt like I wanted to cry all the time. When I spoke to our work's doctor I told her this and she just laughed and said "if I was married to your husband I would want to cry all the time too" (she knew all the horror stories of my marriage, as you can see). Strangely enough, that was very reassuring as I obviously wasn't really going mad! In the end though as I was occasionally finding it difficult to hold it together at work I went to my gynae and he put me on HRT and it was wonderful! It changed my life and - between you and me - it made me as horny as hell! But don't tell my kids! Seriously, he put me on quite a strong dose at first to stop my periods and all of a sudden I felt how young boys must feel when they hit puberty! Perpetually horny! Damn, it was that good! You know it's working when you get on a Swiss bus, look the short, fat hairy driver over and think "hallo baaaabbby"! Not that I was complaining! Oddly enough it was right about this time that my husband left me but hey, not to worry. In my books that was just an added bonus (if you know what I mean). Anyway, after about a year my doctor put me on a weaker dose (shame!!!) and off my own bat I decided eventually to lower it again by taking just two tablets a week, which seems to work for me. As my doctor said, at this point it's really just therapeutic for you isn't it and he was right. I know some people are totally against HRT but for me it was a life saver, I can tell you. Which puts me in mind of an old Victoria Wood joke:

Betty to Maggie: I hear they're bringing out a new magazine called "All you ever needed to know about the menopause".
Maggie to Betty: Does it come monthly?
Betty: No, why would it?

It tickled me at the time!

And what about the situation with the US government closing down eh!  I think 2013 was the last time where certain services were closed for two weeks - which got me to thinking - I wonder what state many people would be in if all of a sudden they were short two weeks' salary? It's a sobering thought and Dave Ramsey's exhortations to save 3-6 months expenses is indeed a very good one. Since I am saving up hard to try to pay off my mortgage early I do indeed probably have 4-6 months of expenses in the bank, but that wasn't always the case, and certainly not when I was married. In fact, by slamming as much as I can down on my mortgage I think I can have my 17-year mortgage paid off in just over eight years - so in about two years from now it will be gone and I can retire. But, back to my original point, it must be a nerve-wracking time for some US government employees and even if it is only a two-week closure like the last time I'm sure it will hit some people hard. Very disturbing times indeed. Let's hope they can get it sorted out, if only for the sake of all those employees whose livelihood is being affected through no fault of their own. Of course in their case it is only temporary - Carillon anyone! What a bloody nightmare!

And finally, my local town has a big exhibition centre (called a "foire" over here) where they host many fairs all year round. This weekend they are hosting a retro-fair covering the period 1940-1980 and all the fashions and furniture styles from those decades. Jordan's girlfriend wants to go with me and I don't know yet whether my DIL wants to go although I did mention it to her because I know she loves 1960s furniture. I hate that stuff because I grew up with it, but I do love the 1960s fashions, which, now that Call the Midwife is back on TV, I am getting to appreciate all over again. Another good reason to lose this weight I think - I would love to get back into some fashionable clothes as opposed to the "practical" beauties that I have been wearing of late. Onwards and upwards, as they say! 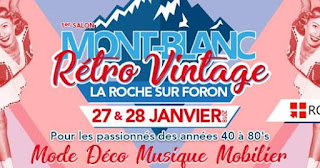 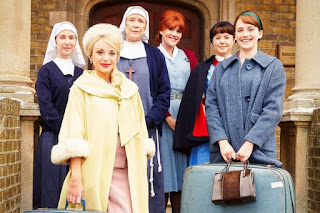 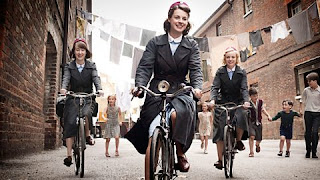