It's all or nothing isn't it!

I mean, there was me saying just the other week that it was "all quiet on the western front" and now this week it seems to be non-stop. Not that I'm complaining but for some strange reason it's starting to feel like I used to feel when I was young and single in Geneva many, many moons ago. You know, footloose and fancy free and going out all the time and having a blast. It's a great feeling, I have to admit.

Monday I had my sewing club (yeah, exciting I know), Tuesday I was at a retirement party and then Wednesday back in Geneva for my Thai cookery course. Then this Saturday I am going to the cinema with my former OH (we're still friends) to see the Darkest Hour, then off to the retro-fair on Sunday with my kids. I was like this when I was single but I'm not sure my energy levels will be the same this time around somehow!

Last week I felt like I was permanently hungry (I get like that occasionally - it kinda reminds me of when I was pregnant - but I'm not, obviously!!!). Some days I felt like "just hook a conveyor belt up to my mouth and shovel the food along why don't you". Of course you can't keep going on like that so I figured it was time to get the gym clothes back out, and guess what? I've been pretty darn good this week and I feel great. I must have walked either 30 or 60 minutes at least five times this week (I can't remember exactly) and have been to the gym twice already and have actually been adding moves to my work out. Great eh. Actually I'm a pretty lazy bugger when it comes to the gym and I can't stand fitness classes so I dawdle along doing my own thing until, I guess, I start to get just a tiny bit fitter so decide to add in a few extra moves. Long may it last, is all I can say, as I feel great. I trudged up to the US mission Tuesday lunchtime (and then slithered back down in the mud after all the rain last week) so yesterday I decided that instead of risking the mud again I would walk into town at lunch time to get my walk in and pick up a few groceries at the same time. It was a beautiful sunny day and as I walked along the lake I heard people yelling and looked over the wall to see seven young people diving into the lake!!! In swimsuits - no wet suits! I mean, yes it was a beautiful day but it was still January in Switzerland! I swear I would have a coronary if I did that! Which reminds me, about 10 years ago my ex and I had tickets to see Lionel Richie at Geneva's Arena concert hall (great concert, very professional). It was in March and when Lionel took the mike to introduce his band he said how he lived in LA and he couldn't believe that it was March in Switzerland and we were all in shorts! It was true too, it was that warm. Very strange times we live in right!

I think I mentioned sometime ago that we had set up a board game evening between a group of neighbours and Valérie - our next hostess - sent round an email today asking for a head count for next Saturday when we will all be up at her new home in the mountains. Jordan and Jen will both be coming again this time so it seems each time we meet the numbers are going up. I'm really glad we started doing it too as between neighbours who are already friends it is a great way to have fun and have the kids join in (one couple have 11 and 14 year old kids).  When I sent Jordan and Jen a text message to ask them to let me know if they were coming so that I could let Valérie know, Jen confirmed that they would both go (Jordan wasn't a definite to begin with) and oh by the way, both my kids and their partners plus another mate would be going to the 1940s-80s retro fair in town on Sunday and should we meet up? Weather-permitting I will be walking down with my friend.It will be great to get together with my kids as a group again!

And then last night I had my second (and final) Thai cookery course in central Geneva. We made Pad Thai and a chicken-chili soup which were both delicious. It was a very nice group too (they aren't always) and the tiny Thai teacher was a doll. In addition to trying to up my exercise I have been (vaguely) trying to follow Weight Watchers online - yeah, I know - taking a Thai cookery class doesn't really fit totally with that - but I have been printing off a few of their recipes as I really want to give it a serious shot this time. This isn't the first time I have signed up but I lose interest very quickly when I can't figure the points system out for homemade dishes. It's a pathetic excuse really but Tania in blog land gave me a tip on how to calculate that using their app, so here I go again. 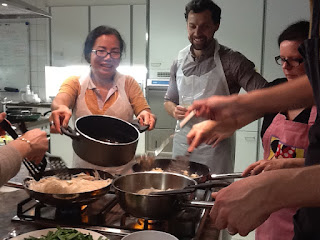 Oh I don't think I mentioned either that just before Christmas I treated myself to a private 3-hour session with the make-up lady who had done Lily and the bridesmaids' make-up for the wedding last year - trying to turn a sow's ear into a silk purse I guess! Anyway, she was lovely and absolutely not trying to push make-up sales at all. I did, however, buy two make-up pencils from her and she told me she would have to send me the bill after Christmas as she couldn't remember how much they cost. So I waited and waited then two days ago I thought sod it, I'm going to remind her. I don't like being dishonest and as it turns out she had indeed forgotten! Which coincidentally puts me in mind of another story from about 15 years ago. Two friends and I had gone out to a Thai restaurant (can you see a theme building here) for lunch one time. We all had the set menu and wine (it's perfectly normal over here to drink at lunchtime). When the bill came Sue said "Oh, oh, dilemma. They've billed us for the food but not for the drinks, what do we do?" Well it took about two seconds for each of us to pipe up that we needed to get the bill corrected so we called the waitress over and explained that she had forgotten the wine. So then she said that no she hadn't forgotten the wine but "that man over there paid for it for you"! And it was my boss!!! The three of us heaved a sigh of relief when we realized what had happened. But can you imagine if we had "done a runner" and said nothing about it! I would have been mortified. I'm just so glad we were honest as you never know when it will come back to haunt you do you!

And finally, I was looking through the Geneva newspaper this morning and the local police had posted a video taken by cctv on Saturday night in a parking lot in central Geneva. This drew my attention because I mentioned previously that I was uncomfortable going to the parking lot late at night after my cookery course (it turns out it's not too bad as the parking lot is right next to a sports centre and a fitness club so there have always been loads of people around when I get there). But this video was not of a woman being robbed, it was, seemingly, a video of a couple arguing and then the guy lit into this young woman and started beating the hell out of her. He grabbed her by her hair, by her wrist, kicked her feet out from under her and was seriously beating the crap out of her. The cctv operator called the police and the affair was sorted with "no charges being brought"!! I guess she was too scared to press charges even if it was all there on tape. As I said to my colleague, if that's what goes on in "public" can you imagine what that poor young woman goes through in private. I can only hope that the police override her and press charges against him and that she gets away from that pig!
Posted by Treaders at 15:51