The Psychopath Next Door .....

.... is the name of a book I read a couple of years ago following the appointment of a new head of HR in the large corporation where I work. I obviously can't go into specifics but to say that she was a ***+***++  ***+***++@@ would probably be an understatement! I am lucky I guess in that I rarely sense office "tensions" and "sensitivities" so they hardly ever bother me, but in this case - good God alive - even I couldn't miss it! The terms "sociopath" and "psychopath" are used interchangeably by many, but for me "psychopath" seems to be the more "depraved", for want of a better word. Of course not all sociopaths are evil nor are they criminal but ....... They say 4% of the population are sociopaths, or 1 in 25, so it seems to me that I must be a bit weird never to have realized I was dealing with one before this "gem" came along. As I read this book she lept off the page to me constantly - it was surreal, to put it mildly!

This woman was such an extreme case that even I couldn't fail to see it. Sociopaths are supposedly lacking in any empathy or remorse, which is why they often make good business managers - they are willing to do whatever it takes in the name of the almighty dollar, and to hell with anyone that gets hurt (as long as it's not them)! It also seems to me that they would make good surgeons and the like (for instance) because I guess no-one wants an "emotional" surgeon operating on them do they? Anyway, the She Devil was totally devoid of any talent or competence but with an opinion of herself that must almost have made her head explode. 10 of us filed a complaint against her whereupon she made our lives very, very difficult while scratching and clawing to save her empty soul. It wasn't just us of course - most people in this corporation hated her and we therefore had tremendous support behind the scenes pushing ahead with our complaint. But the price we paid in terms of our physical and mental health was appalling. It is significant that - as far as we know - she was fired from the last four jobs she held and is more than likely continuing in the same vein given that a leopard never changes its spots!

Since coming across so blatant a psychopath that even I couldn't gloss over, I have been absolutely fascinated by them, to the extent that I have just finished another book by M.E. Thomas (a pseudonym) who is apparently a diagnosed sociopath. If you are interested in this, it is quite an eye-opening read! (I suppose I must have looked like a bit of a nutter on the bus reading this too, come to think of it!) 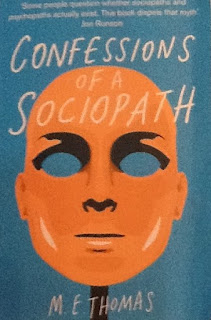 The main characteristics (in a very small nutshell) are lack of empathy, lack of remorse, an opinion of themselves and their skills which rarely has any correlation to reality, an enormous sense of entitlement ... and the list goes on and on! Of course, just like autism, there is a spectrum and I suppose we are all on that scale to some degree or another, but if you ever have the misfortune to end up dealing with someone like we did, this book is an absolute revelation!

My dad used to call them "the wise boys", with their fancy qualifications who used to fly in to a company, throw everything into upheaval, destroy the staff's health and mental stability while wreaking havoc on the company itself, and then fly off leaving a trail of destruction behind them, all the while chalking up another notch on their CV. So if you ever see the mad witch on her broomstick flying over your house with her long blond hair trailing behind her - run for your lives. She is worse than something you would scrape off the bottom of your shoe and she just ain't worth it!