It's been a while since I last posted but that's because the days just seem to be flying by. I have been really busy at work ahead of our 24th July meeting but most of the gruntwork is done so my feet have time to touch the floor now! The bloody traffic has been dreadful of late and I really don't know why but hopefully with the schools breaking up soon it should be a bit calmer. And the weather!!!!! A week ago last Friday as I was driving home the external temperature sensor on my car showed 37 degrees C (98 F). Then last Friday it flashed up at 14 degrees C (57 F)! A drop of over 20 degrees in one week! Crikey. Not that I minded too much because 37 is just way too hot for me, particularly since my office is in a beautiful old (protected) building (so read "no AC"). Yuck that was miserable. And of course, over here unlike places that routinely get much hotter, homes don't have AC either (or none that I know of anyway) so you really are trying to make the most of any little thru-breeze you can get. It's back to about 25 at the moment and so much more bearable!

We had some sad news on the home front too. My dad's last remaining sibling, Uncle Frank, started to suffer from Alzheimer's a few years ago. His wife had had a severe stroke a couple of years ago and needs full-time care so their only child, S, made arrangements for her to be moved into a home in the south of England near him. For Uncle Frank he had changes made to his own home so that dad could move in with him and his family. Three weeks ago they decided to give Frankie a break and take him away with them on holiday to Wales. Frankie got up in the middle of the night to go to the bathroom, got confused about how to get back to his room and fell down the stairs, breaking his back and dying within 24 hours. So very sad. I know Alzheimer's is no fun (dad had it) but it just seems such a sad way for him to go when things were finally starting to "look up for him a bit"!

Then the weekend before last, on the Friday evening, one of my two sewing clubs held our end-of-year dinner in a lovely restaurant near me. Quite by coincidence, the other Monday-night sewing club chose to have their end-of-year lunch at the same restaurant the following day, in addition to springing a surprise farewell lunch on a lovely German lady who was leaving our region to move to Brittany to be nearer her sons. She and I got along well as the two "foreigners" and she was quite tearful when she realized what they had organized. And this being a patchwork club the ladies had had an all-day "sew-in" and made her a beautiful quilt as a souvenir. It really was stunning. I, of course, couldn't take part in the "sew-in" because I was at work so I bought her a beautiful book of post card images of Haute Savoie (the region I live in) as a reminder! She was moved to tears. Then she started threatening not to move to Brittany at all .......

But the sad thing that put a real damper on her leaving do was that one of the other ladies' husbands had been killed in a freak accident just two days earlier. He was only 64 and had been towing a 1,000 litre water butt out to the field when it moved, fell off the trailer and crushed him! Absolutely tragic and of course the shock of something like that must be unbelievable. While I'm sure losing someone you love to illness is appalling at least there is some knowledge of what might happen, but to lose your husband like that just doesn't bear thinking about! So very sad.

Getting back to my rotten commute, last Friday the traffic in Geneva seemed to be easier than normal at leaving time, but once I got through the border and pulled off the motorway to head home I got stuck in nose-to-tail traffic for another hour. The roads were completely blocked and we all got told to turn around and take little back roads!!!! Aaaarrrrkkkkkkk! It turns out it was a demonstration by local farmers using their tractors to block the roads. Much as I love France I have to say the French are very good at going on strike (I'll never fly Air France - they always end up going on strike at Easter, the school holidays, Christmas you name it). I suppose the other side of that coin is that they are not afraid to fight for what they want. BUUUUT on Friday night I wasn't impressed I can tell you. Turns out though, that they were protesting because they wanted something done about the "travellers" (gypsies by any other name) who would just park up on their land and seemingly would only move when they were good and ready. I guess that changes my opinions of the farmers' actions now! While we get a couple of groups of travellers round by us who do leave the fields clean, some are just disgusting pigs. There is a more or less permanent site near Annecy's small airport and they are filthy tips. I saw an article one time about how a group of travellers parked up on a hospital car park in England and it took ages to get them moved so I can understand the farmers' frustration.

Well, the good news is that a group of travellers cut through one of the farmer's chains protecting his field and installed themselves there. So what did the farmer do? He called up a few like-minded friends and they went down to the field and sprayed liquid manure all over them!!! You gotta love that one haven't you - and they moved off pretty sharpish by all accounts! I do so love a good ending.

And finally, on Sunday we had our annual neighbourhood clean up - a little later than usual but it seemed the last available date before people disappeared on their summer hols. It honestly doesn't take long to have our little place looking spic and span - and then we all pitch in and eat together on our little island. There was waaaayyyy too much food but hey, we all had a really pleasant day, we met two new sets of neighbours and the kids (and one dad!!!) had a blast! 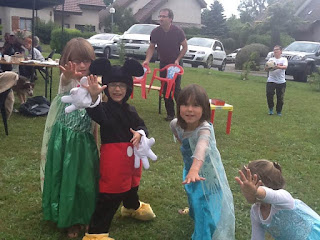 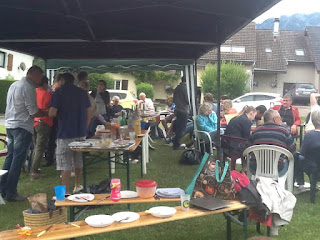