I got it finished. By "it", I mean the quilt I decided to make for my son's wedding in a fit of insanity (wedding is next week). By "insanity" I mean, if you have never made a quilt before why would you suddenly decide to make one for your son's wedding? Which implies (a) a deadline, and (b) it can't just be "n'importe quoi" - I mean, it should be reasonably well done right? I must be nuts.

Anyway, I had already given them money as a wedding present since they have everything they need as they have lived together for nine years already. But, I thought I would like to give them something a bit more personal and decided to make a quilt. I had just learned how to transfer photos onto fabric so decided to incorporate some into the central panel. I also knew I wanted a photo of each of them as toddlers so while I already have photos of my son when he was little, obviously, I had to go on to Facebook and steal one of Lily (the one and only toddler photo of her) from her FB page. That bloody quilt took me ages, all the more so since I was unsure what I was doing and was kinda learning as I went along. But, despite chewing my nails down to the quick and making quite a few blunders (I won't point them out to you), I finally got it finished this weekend, which is just as well as I will be fully occupied from here on up to the wedding. 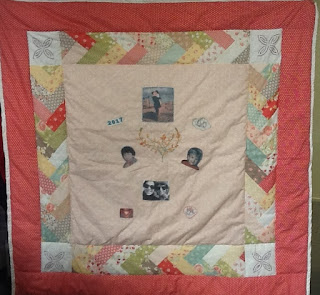 There are loads of cock-ups but I have to say I am rather proud of it - I just hope they like it!

And moving swiftly on, in other news, I mentioned recently that my Uncle Frank - my dad's last surviving sibling - had died recently. The funeral was in England and I couldn't go but sent my condolences to his son, Simon. So yesterday I received a memorial card back from Simon in memory of his dad, which kinda triggered a memory of something my brother said at my mom's funeral last year. 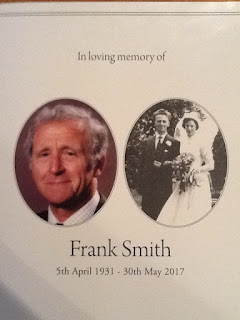 I was very fond of my Uncle Frank and, compared to some of the other brothers, I always considered him rather more "restrained" - quieter, if you like. But my brother Phil told a story of Frankie in his younger days when he might have been slightly less "restrained". Dad and Frankie both played football, and apparently Frankie was quite gifted. Moreover, he was a "left footer" - something which was quite prized because (apparently) most players are "right footed". So one day, local talent scouts arranged to be at a match to check Frankie out. Well seemingly Uncle Frank had been "out on the razzle" the night before, played about 10 minutes then walked over to the side of the pitch and threw up. And that, as they say, was when he saw a glorious future filed firmly behind him! 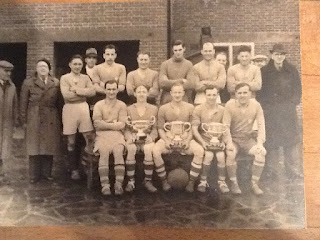 Uncle Frank is in the front row, seated second from the left. And, parenthetically, my dad is in the back row, standing, first player on the left - you know, the one wearing the odd socks!

And talking of pictures (we were, weren't we?), now that the quilt is finished my next job on the "to do" list is to start sorting/purging old pictures. I have an idea for my boys for Christmas where I want to sort out a few photos of them when they were younger and make them into photo albums using Snapfish. I experimented with Snapfish for the first time recently with the few photos I have of my trip to Cuba. The quality wasn't great because my photos weren't great but at least I got to play around with the formatting (it isn't easy) and was able to send off for my album. My boys love the old photos so I hope they will like what I put together.

And again on the subject of photos, my neighbour was in my house the other day and asked me why I still had my wedding photo up since I have been divorced nearly six years. To be honest, I barely notice that photo since it is tucked away on a corner wall, but I thought "she's right", I don't need to have photos of my ex on my wall since there is no love lost between us.  At the weekend I told my sister that I was dreading seeing him again next week at the wedding and was praying to God he wouldn't just show up at the house "because we're all great friends you see" - err, not! She said not to worry as she would answer the door for the week!!! Yay, for sisters. I have already re-programmed my doorbell to play the theme music from "the Good, the Bad and the Ugly" for the week just in case. On top of that, until I get a photo from my son's wedding to replace my old wedding photo, I used my Photoshop skills - to great effect, I think. I hope you will agree! 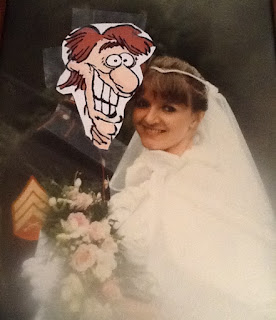