What a week that was!

My goodness, I was expecting to be busy last week but I think even I underestimated just how busy! That being said, I have to say it was just the perfect week. It's so lovely when everything goes even better than planned isn't it.

On the first Saturday I was off I went down to Chambéry, which is about 80 km from here, for the wedding of a dear friend. Marilyn and Philippe already lived in our little neighbourhood when we moved in - in fact Marilyn was heavily pregnant with Maddie as we moved in - and with both Marilyn and my ex being American we instantly hit it off - it was nice to speak English sometimes. In fact, our kids pretty much grew up together and many a happy day was spent skiing and then enjoying the après-ski! 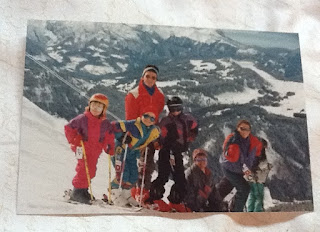 I think my youngest was just a baby when I took this picture, hence he isn't in it!

Well time marches on, Marilyn and Philippe moved down to Chambéry and then on to the States. The kids grew up, we grew old and sadly Philippe became ill and died suddenly last year. So it was a somewhat bitter-sweet day when his daughter, Madeleine, got married here in France, although Marilyn made sure Philippe's presence was felt everywhere. 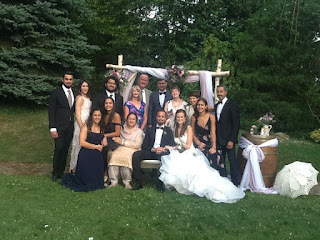 Madeleine and Yousaf got married earlier this year in a civil ceremony in Gibraltar and then had another celebration in the lovely Château de Candie just outside Chambéry. And how beautiful they were. This really was a "United Nations" wedding though as Yousaf's father is Pakistani, his mom is Colombian and they live in Dubai! Madeleine's dad was French and her mother is American - so I would say we had many bases covered there wouldn't you! And it really was a lovely mixture of people - all very friendly and welcoming.

Oh, and one of the things that tickled me was as part of the favours there was a bar of yack's milk, a fridge magnet from Colombia, and this lovely little tuk-tuk from Pakistan - isn't it sweet! It was so good to see them all again, and see what lovely kids they turned out to be - but more especially to re-connect with Marilyn again after all these years! 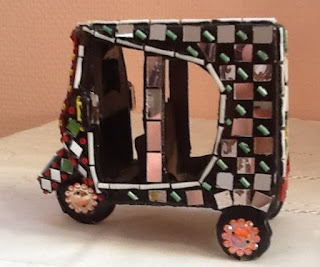 I stayed till 1 a.m. (lasting on just one glass of wine as I had to drive) and got home around 2.30 a.m. on the Sunday morning.

Then the next day my neighbour had invited a group of us over to lunch, as a kind of semi-annual get together of old friends and former neighbours. Thankfully I had had the forethought to make something to take round beforehand as I was pretty tired that morning, I have to say. I knew there was the little granddaughter from next door going also so I made sure to take a couple of games I had just bought to keep her (and the adults as it turned out) occupied. Ker-plunk was a big hit!  In fact, a group of us have decided to get together once a month for a board game evening, so I have been buying games which I have fond memories of from my childhood, as well as new games that have recently come out (Pie Face anyone) and of course new sets of playing cards. I have wonderful memories of playing Tarot and Belote (sp?) as a singleton, as well as Uno, so I'm hoping these evenings really take off!

More to follow - it really was a heck of a week!