Memories of a lovely day!

My son and his wife are back from their honeymoon and started back at work today (berrrrkkkkk!!! is how he put it). But they had a wonderful honeymoon in Croatia (in the Split region), which makes me think a long weekend in Croatia could be in my stars too.

Back to the wedding, I really can't believe how perfectly everything went. Even the weather, which threatened rain off and on, remained perfect all day (if a little too hot and humid, but I'm not complaining).  The setting for the ceremony was a lovely place called La Médicée, a kind of old mansion house which had been renovated but had retained its oldy-worldy charm. I have rummaged around for photos but can't actually find any that do it justice. I think what I really loved about the place was that it was "rustic" rather than pristine, with wild flowers blooming everywhere, in addition to the pots and pots of cultivated plants.

My sons are both in the same band and although there is a four-year age difference, they have many friends in common. The "mates" were just starting to show up as we got there and I had to laugh when I saw Sylvain, the rather gorgeous young red-head who is going to be re-doing my balcony soon. He is a "mate" and had decided to wear a bright, bright orange suit with matching hat - I mean it literally hurt your eyes to look at him in the sunlight - and a young man (who turned out to be Sylvain's brother - I should have known), was in a matching outfit but in canary yellow! What a sight those two were! I went up to say hallo and complimented them on their "discreet little outfits" - to which they both just grinned and said "well they said no black or white"! And you know what, I loved it - just my kind of humour. The young people all looked very handsome though all dressed up - which is not something I often see with that lot.

On to the wedding, I have to say the ceremony was just fabulous, even though I was having to try to give a running commentary to my family as the main part of the ceremony was in French - although where possible people took it in turns to speak in either English or French. The basic gist of the ceremony was that "while people seemed to think that André and Lily met in 2006, they were wrong. They actually met around 400 years B.C.! You see, in those days there were "men", "women" and "androids" - beings made up of a male and a female half joined together at the back, but having two heads, four arms, four legs and two bodies. Sadly, over time it seemed that these androids became vain and started thinking they were more important than God, so Zeus became angry, took his sword and split them down the middle, forever to wander the earth looking for their other half. Now Aristotle had this theory - that somewhere in the future it would be possible for these androids to find their other halves - so taking the time machine (that he very handily happened to have available to him), and plugging in the GPS, he time-warped himself to Geneva in 2006, to the Academie de Langues et de Commerce, where he passed himself off as both a janitor and a professor of Greek history at the same time! Well one day he was busy painting the walls (in his janitor capacity) when André happened to glance over and spot Lily, at which point Aristotle shouted "eureka (side note: I know that was Archimedes but it was a commonly used expression in ancient Greece) and he realized that André and Lily had indeed found their other halves". So he had managed to prove his theory you see!

I tell you, the lady celebrant made this such a fun story that everyone was giggling. She then went on to re-enact André getting down on one knee to propose last September and the completely unaware Lily thinking he was stopping to tie his laces! As I said, the ceremony was lovely. I think I may have mentioned before that Lily's mom is originally from Korea but came to Switzerland at the age of eight. There were a couple of sweet "nods" to mom's Korean culture during the ceremony, but one that moved us all was that they had tied cards to the nearest tree with the names of loved ones who were no longer with us physically but who were there in spirit! At the end of the ceremony they bowed to each other, bowed to their guests and then bowed to the lost loved ones! 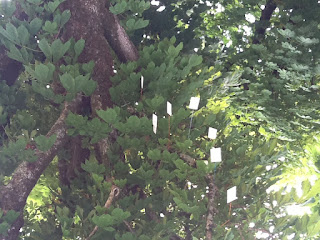 Both dads were blubbing their eyes out but somehow Lily's mom and I just looked at each other and rolled our eyes! 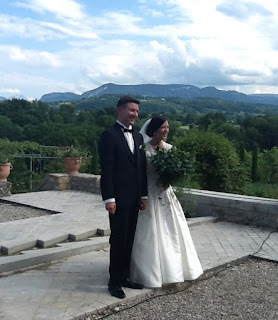 After an initial apéritif, which allowed the photographer to work his magic (the photos above are just ipad photos) we went in to the beautiful hall, wonderfully decorated, and were served a really good five-course meal. I think the caterers might have been recommended by la Médicée but in any case they were excellent. After that there were a few games and the dancing started at around midnight. At this point we old foggies were getting tired so we left around 1 a.m. I understand they partied on until 5 a.m. so there were a few bleary eyes the next morning but hey - as long as no-one was driving who cares.

The next day André and Lily had organized a light brunch for anyone who had stayed overnight in hotels in the local area (I drove my family home but we came back again the next day).  It was again scorching hot and difficult to get out of the sun, but it was nice to see the mates all turn up again on so little sleep. 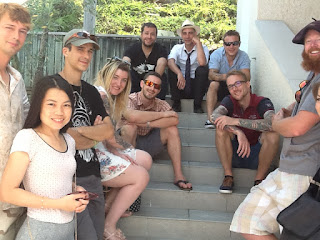 My family and I ended up sitting on the same table as my ex and his new gf but actually it was all right. Everyone was polite and chatted so I am so glad it went well. He had phoned me on the Monday night to see if "we" wanted to go out for a drink with them but I just said I would rather not, but that I would see him at the wedding. Phew, thank God that bit went without a hitch!

The photographer was a young Englishman (now a friend) who the kids had flown out from England and who they put up at their apartment. He is going to make them a website (I can't wait) but as it isn't ready I thought I would post a couple of his lovely photos. Oh, and it had been one of his dreams to do a photoshoot in the Swiss alps (although with the French alps right there I wonder why not do it there - maybe he hadn't heard as much about the French alps). Anyway, on the Saturday the three of them drove up to Zermatt, caught the little train up to the village, then the rack railway up to Riffelsee and hiked round to the most beautiful vantage point for taking pictures of the Matterhorn. They caught Lily unawares as she was changing back into her wedding dress though - ha! Another one for the album! 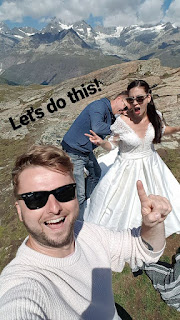