After the hectic weekend, I had a day to myself on the Monday before my family arrived from the UK for the wedding. I had looked into getting a spray on tan just for the event but in the end was too lazy / cheap / tired and decided to "do-it-myself"! Well what a mistake that was. I should know from previous attempts that it takes time and skill to get it looking half-way decent and I have to admit even I was shocked when I realized how "streaky" I ended up looking. It was only my legs in any case as I didn't care about the rest but .... good Lord what a mess! So much so, that I actually went to the dermatologist yesterday lunch time on another matter and he took one look at my legs and just laughed! Oh well, as I was already telling myself about my lack of weight loss, "nobody is looking at you anyway"! But darn it!

Which brings to mind another "roaring success of mine". My family arrived on the Tuesday and as I was showing my sister and her husband up to the attic bedroom they both turned to me and said "what is that smell? It smells like sh""t"! And yes, you've guess it, it was indeed me! You see, I had been getting bitten to pieces by mozzies (as I always do) and couldn't find my usual insect repellent so I smothered on some other mozzie stuff (at least it had a picture of a mozzie on the bottle) that I found in the bathroom drawer. I have to admit I thought it was a bit "different" and definitely very pongy but hey ho, needs must. Well when we trudged back downstairs I picked up the bottle and having taken the time to actually read the instructions this time, I found out it was some kind of "liquid moth ball", i.e. you put a small cap full of it in your washing to repel moths. I had smothered the bloody stuff all over me and reeked of camphor! Even more embarrassingly, I had done the same thing on Sunday when I had been invited over to my neighbours for lunch - I wondered why no one wanted to sit next to me! Lordy, lordy, as they say, "you can take the girl out the country but ......."!

Anyway, getting back to the subject, on our first full day "pre-wedding" I took my family up to a lovely little village called Les Lindarets. Now the locals here are obviously very smart because they took what is basically just your small, ordinary alpine village - and allow their goats to run free, and then sell goat feed to the tourists who drive up there in their droves - all to see the goats!!! Smart eh! So my sister and I went into a gift shop (which actually had an older goat and a kid wandering round inside it) and bought three bags of goat treats. I then handed them to my brother-in-law outside the shop (knowing full well what would happen) and we sat back and watched! 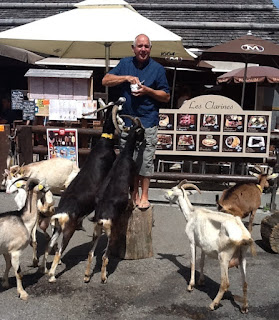 The goats were actually OK as long as you didn't get the whole herd crowding round you, but they really were funny.  After that we went back down the usual "touristy" route, past a lovely lake called le Lac de Montriond and on to the waterfall and horse-shoe gorge which form the basis of my usual visitor pit stops.


On the day of the wedding we had time in the morning for a wander round the local market. It is much bigger than my usual Saturday morning market and I really regret not being able to make it there throughout the year - oh well, retirement will come soon enough I suppose. 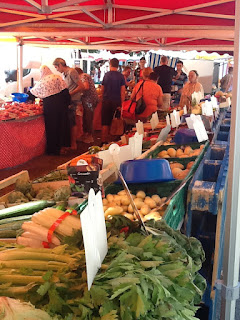 And then we were off to the wedding. I knew my way all the way to the motorway exit but got lost after that (so much for GPS eh). Thankfully, we bumped into the local postie who was able to direct us right to the front door. Thank God!!! I couldn't even imagine what it would be like to be late for my own son's wedding!  (Note, the photographer is currently putting together his beautiful photos into a website so I will share more on that next time - but of course the photos are beautiful)!

On the Friday we had a simple brunch with any of the stragglers that were left behind from the wedding (many had either partied all night or had booked hotels nearby). There is a lovely bridge about 10 minutes from the wedding venue that I knew would be a nice spot for my family to see so we tootled up there after lunch. It is called Pont de l'Abîme (bridge over the abyss) and it really is quite spectacular, but of course it was hard to capture the height when looking down so I took one of the billboard photos to give you an idea.

Then on the evening my neighbours invited us all round for an aperitif. These were the neighbours who had kept my second son after he was born and I went back to work and they are like second parents to him. I had taken their daughter home to England with me when I was on maternity leave and - get this - both couples (the neighbours and my sister and her husband) had got married on exactly the same day over 40 years ago! The weird thing is, I know these two couples would probably end up being really good friends if they (a) lived in the same country, and (b) spoke each other's language! As it was, I was interpreter-in-chief but it was still a lovely way to end our day.

Their last free day before returning home was the Saturday so we did our usual "Lac des Confins, La Clusaz, Annecy" run but you know what - I never tire of it and neither do my family. I posted a picture of Lac des Confins when my brother was over in May, but this time we were lucky in that the cable cars were running so we were able to zoom up to the Plâteau de Beauregard for lunch, then back down to La Clusaz, and back through Annecy before heading home.
We had planned to go down to a local village fête to round off our day but the heavens decided not to cooperate and we knocked that on the head. Instead, we decided to go up to my friend, Stan's, little bar for a pizza and a natter, and yet again my family were delighted by what a congenial little place it is. Oh, and get this, I mentioned before that Stan's youngest (my son's growing-up buddy) is a professional rugby player. Well guess who got to take a selfie with Ronaldo last week - yep - that's Daniel in the middle with his medal! 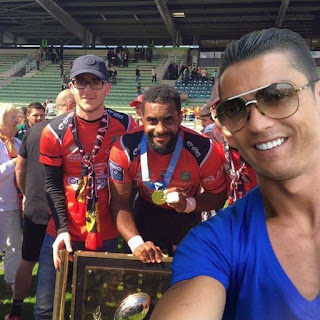 Daniel's a talented rugby player but, more importantly, a lovely young man (as are all Stan's children - he must be doing something right)!

And finally, on a slightly sour note, on the Sunday night after my family had left, I was watching TV when I thought I heard yelling. When I muted the TV I realized that there was major yelling going on outside, so I went out to look.  A young man was up at one of my neighbour's living room windows yelling and screaming vile names, presumably at the daughter of the house. He then started throwing his skateboard at the window and yelling at her to come out. The daughter is around 28, I would say, and lives with her boyfriend. I assumed this was the bf and that they had split up, but in fact it turned out that he was a long-ago boyfriend against whom she had a restraining order and this was the second time he had violated it. By the time I got out there, three other neighbours had showed up, as well as her father and the police arrived several minutes later, by which time the young man had disappeared. It was very unsettling for me though, as it triggered awful memories of lying in bed waiting for my ex to stumble home drunk and not knowing what kind of mood he would be in, or indeed if the temper tantrums and throwing stuff around fits would erupt. I'm glad for this young girl that she is away from him and hope that the police take it further. I'm also soooooo glad that I don't have to live that kind of life any more. But what a dreadful trigger!!!