A girl needs all the support she can get!

Just this week a comment on another blog about buying underwear (you know, the kind of thing you discuss transatlantic with someone you have never met) reminded me of a "bra buying" story I had all but forgotten about!

Some years ago my oldest sister, her daughter and I decided to go to Marks and Spencer's in Dorset to be properly measured for a bra. We have always been "well stacked" in my family (well the female side anyway, although apparently cosmetic surgery for "moobs" (man boobs) is now the fastest growing cosmetic surgery for men, but I digress). Anyway, we went in to be measured in turn and all three of us came out in fits of giggles. As is pretty common, we had all been wearing totally the wrong size of bra for years! Of course the "right" size bra ended up basically looking like two wheelbarrows welded together, so not exactly a turn on, but my niece said that as soon as she started wearing the correct size bra her back pain totally disappeared! Ha, who wudda thunk!

A few years later the same sister had to have an operation on her shoulder. Shortly after the op she decided that she would like to be re-fitted for a new bra, so back to Marks and Sparks she trotted with her husband (who was driving) and my mom in her wheelchair (who was just along for the ride).

After a little while they finished up and my sister and the assistant walked out. At that point, my brother-in-law stuck his head out from behind the curtain and called out "Who's next please? Professionally qualified bra fitter at your service!" They said the look on the waiting ladies faces was a sight to behold, and my mom went into a fit of the giggles! Oh, and did I mention that my brother-in-law was a cop!!!! So ladies, if you are looking for a professionally-qualified bra fitter and you're in Dorset, you know where to go! 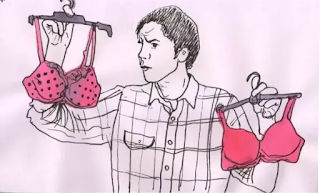