And still as busy as ever, but at least on the positive side, I know that this will be my busiest period so I know what to expect. That being said, added to the general exhaustion of last week, the weather was scorching and the traffic was awful. I mean, one night when I didn't work late, I left work at 5.30 pm and made it home at almost 8 p.m.!!! Not sure what that is all about but I am so looking forward to the kids getting out of school and there being less traffic on the roads for a couple of months!

Add to that, the state of my house has been getting to me and when I get like that I always feel like I am chomping at the bit to do something about it. By European standards I have a fairly large house with an enormous basement, and of course when you have all that space you fill it up don't you. Not just me of course. At one time we were five living here but as the kids (and one gf) moved out and the ex left me, my house became the repository for all things unwanted, particularly an entire three-bedroomed farmhouse' worth of stuff that my ex left behind two years ago. Admittedly my kids took what stuff of his they wanted but that still left me with a shedload! Oh, and does anyone else have the same problem that when you switch from summer tyres to winter tyres, all the leftover tyres get dumped back at your place! Then of course, nobody can really recognize whose are whose summer tyres to put them back on when summer rolls around! Urrggghh!

I'm not totally blameless of course. I love to cook and for more than 20 years subscribed to the BBC Good Food Guide. Trouble was, I went through the magazines and either highlighted recipes or ripped them out, meaning to get around to trying them later. Well you can imagine how that went can't you, and while I have discovered some fabulous recipes, if I live to be 1,500 years old I would never get around to trying them all. On top of that, being just me at home now, why would I want to cook Ken Hom's full Peking Duck menu!! So to that end, I vowed to not only attack the basement but also start going through the house, and much to my shame, the picture below shows the recipes "I was going to try out" taken from just one drawer!!! (Man, this is like washing your dirty underwear in public!!!) Shame on me! 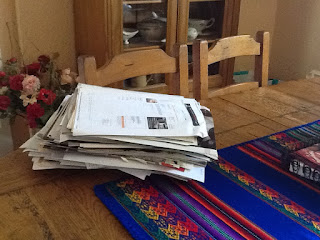 I took quite a large load to the tip on Saturday - stuff I could donate or give away I will advertise on Facebook or take to the local charity. It's amazing though how just getting rid of one small pile of stuff instantly lifts your mood isn't it!

Still, not being too hard on myself, I have to show you my "major achievements" this weekend too. Every time I go on holiday I tend to pick up little souvenirs but with the intention of actually bringing back something "useful", or at least not just a dust collector. For instance, the table runner you can see in the above picture I bought on the Floating Islands in Peru four years ago. I had a few things I fell in love with in Greece last year that I wanted to put up on my external walls, but had no drill to put them up with (the little drill I bought after my ex left was not strong enough).  Anyway, having cleared some stuff out of the basement I came across my ex' power drill so thought "sod it, I'm gonna put those things up". I tell you, it was hard going as I was drilling into solid concrete, sometimes with metal inside it (I hit that in a few places), but after much sweating and swearing, and a couple of my neighbours looking on laughing (they did offer to help), I managed to get six pieces put up in about an hour, so if anyone needs a "handywoman" just give me a call!

And after the terrible events in the UK in the past month (two terror attacks in London and a loser blowing himself up at the Ariana Grande concert, plus the tower block going up in flames) it felt nice to find a small bit of "joy" this weekend. My next door neighbours have three grandchildren. The nine year old is down's syndrome and then there are two five year olds. Well, I was out in what I laughingly call my "veggie plot" attempting to take it back from the encroaching field, when the three kids came "to help". I think in reality they were more interested in watching the horses galloping around (you can see them better from my garden which backs directly onto the field) but the excuse was "to help me"! 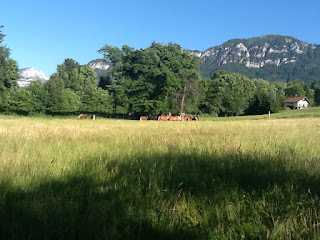 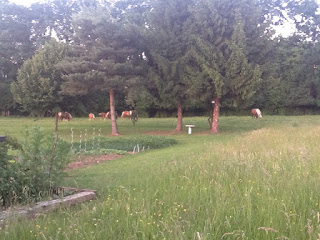 Anyway, the two five-year olds eventually left but the oldest, the little DS boy, stayed to "help me", and eventually, with the help of his dad, he was able to tell me that he now knew when he had to go pee and could tell his mommy and daddy! I was shocked because, I suppose, not being in their situation, I had never given it any thought how long it would take to "potty train" him. But, he was as pleased as punch, and for the first time ever I got a big kiss!

Oh, and if I really want to be a nasty cow (I do), I stopped in at Stan's for a coffee on my way back from shopping on Saturday and as I walked in just routinely said "bonjour" to the couple who were waiting to pay him. Turns out, it was the dumpy, fat-ankled little cow that my ex-husband ran off with in 2010 and maaaaaaan has she got fat! I asked Stan if she was pregnant (she looked about eight months) and he said of course not as she is nearly 50 (she is 10 years younger than me). I had been working in the garden that morning and looked a bit of a mess but decided to clean myself up before going shopping - good thing eh - bumping into her like that. I must ask her when the baby is due next time! (Yeah, strike me down I know)!