I see ol' Bojo did another U-turn last week (surprised anyone?). When he was first elected PM he ousted any cabinet member who was not 100% behind a hard Brexit. It was a case of "toe the party line or you're out"! Well since the UK has left the EU they are no longer bound by EU minimum standards - environmental, food security, etc. - you get the idea - and since the UK is now having a hard time obtaining the chemicals needed to treat sewage, the government decided to give the green light to allow water companies to dump "minimally treated effluent" (i.e. untreated shit) into the country's rivers and oceans, and Conservative hard Brexiteer MPs were forced by ol' Bojo to defend this stance to their constituents. They tried blaming the problems on Britain's "antequated Victorian sewage systems" which, funnily enough, seemed to have functioned adequately until now, so go figure. An amendment was introduced into Parliament to try to prevent this and was unceremoniously shot down by the government. Not unsurprisingly there was great public outcry that resulted in Bojo doing a complete 180 and backing away from this new position, thus hanging out to dry the Conservative MPs who had just had to defend it! The power of the man's ego and his ability to deny and/or blame others is something to behold! But then I suppose as the UK is, as I write, playing host to the 26th United Nations Climate Change conference in Glasgow, we can't be having untreated turds floating down the River Clyde while the bigwigs are eating their Scottish salmon can we! And what about the much vaunted recent trade deal with New Zealand, which will, for instance, see the current 20% tariff on imports of NZ mussels dropped and effectively put another nail in the coffin of the UK's fishing industry! Probably just as well, what with trying to grow mussels in all that untreated sewage huh! I tell ya, I shouldn't read this stuff really because I find his/their behaviour more and more outrageous by the day and it just does my head in!

So with winter looming I decided that I needed to think about what projects I want to tackle round the house while there's so little going on outside. With that in mind I shot off to the local DIY place and started searching for the young(ish) man I always hone in on because he's so helpful and doesn't treat me like an idiot when I have to ask him to explain everything to me in simple terms. Oh, I play it off as being a language problem (which it is to a certain extent), but since I really don't know what I'm doing most of the time I find him to be incredibly helpful, although I'm sure next time he spots me walking in he's gonna try doing a runner first! Last time I was there I picked up a bag of mortar and re-cemented parts of my terrace that are becoming a bit "holy" (as in unstable, not religious) and it worked a treat! I probably should get some more and go over the entire terrace at some point, but for the time being it'll do. So today I told him that some of my window frames are starting to show water damage (I reckon they must have been installed about 25 years ago), and I couldn't afford to replace them just yet, so he sold me a product for outdoor use that can be used for waterproofing, and how to go about cleaning up the frames and applying it! Goal! Then it was off to get a new plug socket because I'd plugged my vacuum cleaner in the other day, yanked it too hard and pulled it out the wall, thus breaking the support! So there's job number 200 to add to my list. And I then asked him for advice on buying my own petrol-run generator as I want to be sure I have at least some electricity/heating/light this winter in the event of an extended power cut. So he showed me two, with the smaller one being €200 more expensive than the larger, more powerful one. Which didn't make sense to me but he explained that the cheaper generator - while more powerful - was also a lot noisier. But in the event of a sustained power cut do you really care about the noise? So I walked out of there with a generator too, which he kindly lugged out on a trolley and put in the back of my car after much huffing and puffing. But then of course, guess who had to get it out of the car alone when she got home? Yeah, me and damn, that thing was heavy! But I'm a stubborn bugger so I huffed and puffed (but didn't blow the house down) and got that thing into my garage all on my own! The irony is that it's actually on wheels but I needed to get it out of my car and out of the box before I could use the wheels! Anyway, I'm a few hundred euro lighter right now but have more than enough projects lined up for the coming winter - although sometimes I think doing a jigsaw puzzle might be an easier way to pass the time!

After I'd finished sorting all that out there was a knock at my door and it was my neighbour come round for a chat as she said she hadn't seen me for ages and was concerned that I might be "holed up" too much on my own! I probably am actually but I'm ok with it really. So I told her that no, I was just going into "hibernation" mode, and while I actually go to yoga and out walking most weeks, (plus I see the Munchkin a couple of times a week), maybe I hadn't been as sociable as I should have been! Then she asked me a strange question - "have you heard much coming from my house lately?" When I told her that yes, unfortunately I'd heard quite a bit over the last few days because you just can't help it with these houses, so she told me that, as I suspected, the tension between them had been getting worse and worse and she couldn't take it any more. Actually I suspect that was the real reason she came round - she needed someone to just listen to her. Her hatred of her husband is growing by the day and when he more or less told her that if she didn't like it she could just "bugger off", I asked why she didn't make an appointment with a lawyer to find out just where she stood if she decided to divorce him. She doesn't have to do anything with that information of course, but at least she would know, and I suspect having been married 50 years next year she would be in a much better position than she thinks! Like I've said before, I don't think she would ever divorce him because she's afraid of striking out on her own at nearly 70, but at least if she gets that information she knows where she stands right? So then she mentioned that he has to go back into hospital for yet another operation to put more stents in his legs (over 50 years of smoking will do that for ya), but she didn't know how she would get him there since she's terrified of motorway driving, driving in the dark (and anywhere out of her comfort zone really), and her daughter will be back at work full-time at that point. So I told her it's not a problem, I will take them both as long as it's not the same day I have to take my friend to a different hospital for her colonoscopy! Heck, if it comes to that I can manage both as long as we know the dates and times of both procedures. But she makes me so sad, she's so beaten down and her world is becoming smaller and smaller as she's had her confidence sucked dry over the years! Still, I'm glad she came round because sometimes just having someone to listen to you can help, right?
And finally, I've just started reading Wintering, The Power of Rest and Retreat in Difficult Times, by Katherine May, and I'm really enjoying it (sorry I can't remember who recommended it)! 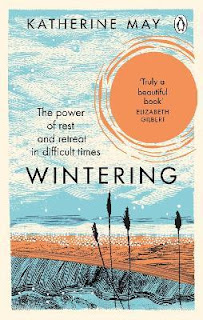 As far as I've gotten, she had to take time off work when her husband became ill, and then as soon as he got better she became ill and had to take sick leave herself. As a mother working outside the home (the term "working mother" being completely redundant - all mothers work), she was riddled with guilt and finding it so difficult to just slow down, having been used to going 100 miles an hour from the get-go. And then she realizes that she is starting to enjoy the enforced slow down and to question the need to be busy 100% of the time and achieve more and more! This is what struck a chord with me, the fact that she remembers when her son was born and then not much after that - why would we aspire to that if we could help it? She always enjoyed cooking but was now realizing that "... the butcher can sell me exact quantities of meat, which I know I will use that same day. I no longer have to act out the cycle of freezing a packet of chicken, defrosting it a week later, then not having time to eat it and so throwing it away [guilty as charged]. I feel as though I'm cooking autumn into my house"! ... "Life is clearly teaching me some kind of lesson, but I can't decipher it yet"! ... and "Life begins to happen again, and that makes for more compelling memories"!
As I say, I haven't finished it yet but so far I'm enjoying it very much and it's turning into one of those books I can't put down. When I see the shockingly high - and unexpected - figures for the number of people who, having worked from home during lockdown, are now deciding they don't want to go back to the rat race and are resigning in their droves, maybe more people really are deciding to get off the hamster wheel and work less (assuming they have the financial means to do so) and I can only say "good on yer mate" - it took me way too long to figure that one out - but then I'm slow!