My friend got back from a month in Spain recently so we decided that we should get out walking again before the snow comes. We both like the cold weather but walking on snow is not a favourite! Actually she slipped and fell on the ice last winter, banging her knee heavily, and is pretty much convinced that is how the pulmonary embolism she got in February came about! Either way, her stay in hospital frightened her so since leaving hospital she has been extremely disciplined about getting out walking and losing a fair amount of weight, so hats off to her! Anyway as the weather was good we set off on Tuesday to do an "uphill", although yet again we ended up doing more "uphill" than I think either of us wanted! Yeah, if one of us learned just a little about orienteering we might do very well!

Since I had to drop my car off to get my snow tyres put on we took her car and set off for Plaine Joux, which has got to be one of the most beautiful spots around here, even though pretty much everywhere is lovely. We decided to park down at the lac Vert (the green lake), which is very small but beautiful, particularly at this time of year obvs.

She told me she had been out this way a few days previously and had "found the new 'Himalayan footbridge'" but had been too scared to cross it. Now this is the bridge I had gone looking for about a year ago and couldn't find it (again, my map-reading skills leave a lot to be desired), but it turned out it was just a 30 minute walk from the lac Vert so off we went. On the way there we passed two forestry workers sitting on a bench having their lunch and I commented to them that they must have the world's most scenic lunch spot - and of course they agreed!

Well we found the footbridge and my friend told me that she turned back last time. So I said I would turn back with her if she wanted but I was happy to go over the bridge too - and she took the bait! Yep it was wobbly and she mentioned that not long after they'd built it they'd had problems with one of the cables and had to close it for a while (now that's reassuring isn't it), but over it we went and it was great! On a side note, as a follow-up to her stay in hospital my friend has had to have a whole barrage of tests (you know, half of which she should have been doing routinely but never got round to) and so she's got to go back shortly for a colonoscopy - which she is dreading! And she was saying how awful it is to have to provide poop samples on three consecutive days if you don't usually go every day (I know, don't we have wonderful conversations) so I told her that if one of the cables on the bridge looked a bit iffy this time I don't think she'd have any problem providing those stool samples (nor would I, I suspect)! 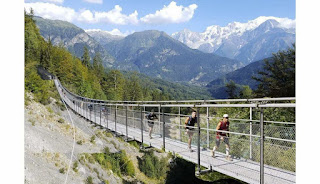 Anyway, we made it, feeling very proud of ourselves and decided to take a break for lunch - and look at the cute little picnic table we found! 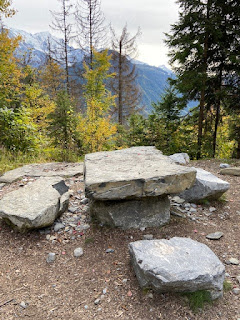 After that we got a bit side-tracked because our intended route was closed off due to forestry work so we ended up chasing our tails and hoping there be no damn bears in these woods because we went way out of our way before finally making it back to the road where we were appalled to see it indicated 6 km uphill to get back to the lac Vert! Damn! We were starting to get to the point where we'd had enough but if you need to walk another 6 km to get back to the car what choice do you have?

But we made it back up to Plaine Joux which, as I say, is probably one of the most beautiful spots around!

We stopped here for a drink and a breather and were lucky enough to see a few people setting off paragliding because it was the most perfect day for it. Oh, and Anne (in Alabam), that wasn't me in the picture - sorry about that! I asked my friend if she would do it and said I thought I could probably throw myself off the side of the mountain (in a tandem jump, of course) but would have bigger concerns about the landing. Then my stupid sense of humour kicks in because at this spot we're about 15 minutes from the Italian border so I let my imagination run and was saying what if you couldn't "steer" the bloody thing and you ended up in Italy with the Italian border guards looking up at the sky yelling "passaporti per favore"!!!! Oh well, it made the lady behind me giggle! 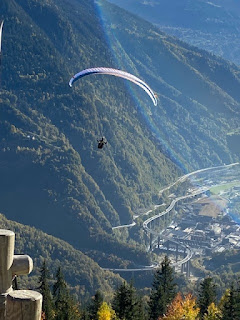 After that we got to call it a day (thank God) because I had to get back to Ford to pick up my car. But I did over 17 km (10.5 miles) and more than 21,000 steps and I'm knackered! I've really felt the front of my thighs today and was hobbling down the stairs like a little old lady - and I seriously reckon I could crack walnuts with my butt cheeks at this point, but it was a great day out and I'm so glad we did it!

In other news I took a shufty at the book exchange in our local supermarket and was pleasantly surprised to find Simon Wiesenthal's book Justice Is Not Vengeance (or at least that's my translation of the French title - not sure what it's called in English), so that should be an interesting read!

And finally, I just received a message from my friend to say that the French have given her an appointment for her citizenship interview end-November - just 3.5 years after she submitted her paperwork!!! Ha, by the time I started preparing mine it had all gone online and I have only been able to submit a certain number of required documents so goodness knows where that leaves me! But, in two years time I will be 65 and since I've lived in France over 25 years (both of which are pre-requisites) and am now the grandmother of a French child, I can request citizenship by ascendency at that point and, from what I understand, it's a given - no more tests, French exams, nothing, as long as I'm not a career criminal I guess. So all that work for nothing eh! Oh well, I'll take it!