So what's new? Not a lot really as I seem to be just treading water at the moment - which is annoying because the weather is glorious and I really wanted to be out there enjoying it - but I just don't seem to have the oomph right now. Oh well, it'll come back I suppose! That being said I got my 1,000 miles in sometime in September, which is pretty pathetic really because it doesn't entail an awful lot of walking on a consistant daily basis but I suppose taking into account bad weather (and the constant rain this year), it's not too bad, even if it could be a lot better!

My friend suggested we go out walking the other week so I took him to the Lac Bleu (where the three lakes are) and I'm pretty sure he's now found his new favourite spot to walk, so much so that a couple of days later he came over again and we went to the small lake at La Tour. This lake is just five minutes from André's place so we stopped in there for a coffee too. It wasn't much in the way of km walked but I guess every little helps!
On a different note, I got a shock the other day because I received a monthly bill for my mobile, one for my wifi and another one for my landline which hasn't worked in six weeks! Well that put a bee in my bonnet and I got straight on to SFR (my phone carrier) intending to read the riot act to someone - anyone - because while I didn't care about the phone not working, I was damned if I was going to pay €40 a month for the privilege! Now I hate making these calls because they must outsource them to Africa (just like the calls in the UK seem to go to India) and I have a hard time with their accents, especially when they usually have their microphone stuck in their left ear half the time! (That being said, I'll take the African accents over the French-Canadian accents any day)! Oh don't get me wrong, they are always very helpful but I hate having to tell the first person (North African) what the problem is, and then she puts me through to the next person (French-speaking African - that is if the line doesn't cut off) and I have to go through it all again. Anyway, while the second guy was, indeed, hard to understand, after I asked him to speak up we managed to figure out what the problem was. And it turned out it was me!!! Good job I never gave anyone a bollocking then isn't it!! When he asked me how I'd ended up with that particular wifi box I told him I'd been online and that was the one recommended after I'd put in my post code, but, turns out it wasn't compatible with my landline, unlike my last one, so it was never going to work! Anyway, long story short, he sorted me out with a new box against the return of the old one and guess what, the damn thing works now! What's more, since the telemarketers started up immediately, I've had the bloody thing unplugged ever since! Still, at least it's sorted and I did apologize to the young man for him getting the "little old lady call who doesn't understand anything" and he just laughed and said "no problem"! So I'm sorted, although André still isn't, but I think that might have more to do with his place being brand new and him being one of the first tenants!
Moving swiftly on, the other day I was on FB and I'm starting to realize that if it wasn't for being able to keep in touch with family and friends dotted all over the place I'd probably just get rid of it because I don't like being "advertised at" constantly. I actually have two FB accounts because when I was leaving work I realized that I'd used my work's email as my log-in email and when I tried to switch it to my private email it wouldn't go through. So today I finally went in and deleted that account and may get rid of the main one too - but I'll have to think about that for a while! Anyhoo, a couple of days ago I got a message from Sharon, a Scottish lady I'd met in St. Lucia about six years ago, just sending a short message to ask how I was doing. A few of us did exchange contact details and very occasionally would shoot off a quick message to each other so this didn't surprise me too much. BUT, after a couple of messages "Sharon" asked if I wanted her to tell me about the government windfall that she'd just received and I should be interested in it because she'd "seen my name on the list too" - which frankly would be a bloody miracle because the U.K. population is pushing up to near 70 million and I was using my married name when we met! And then I remembered when my Words With Friends buddy in New York sent me the same message. Now this was a pretty generous offer considering I haven't lived in the U.S. for over 30 years and it's been over 40 years since I left the U.K! So I told "Sharon" where to shove it and now "Sharon" is threatening to kill me! Oh dear, some people don't take rejection at all well do they! I did get in touch with the real Sharon to let her know her page had been hacked and we ended up having a chat but gosh, these scammers/creeps are everywhere aren't they! 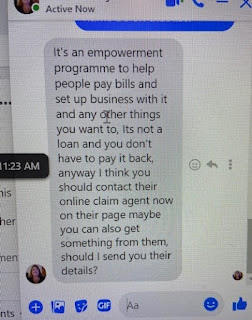