Time to get a grip!

Having done pretty much bugger all all day I realize I have to get a grip on this retirement thingy. I have always been a late bird but going to bed at 1 a.m. (or even 2 a.m.) most nights probably isn't the best way to go about it. It means I tend to get up around 8.30 a.m., so not horrendous but I think I really need to get into a better routine. All the more so since the good weather is on its way and I can't take the mid-day heat! I know, I know, here I am already whinging about the heat when they have had 500 tornadoes in one month in the US mid-west! But I really can't take the heat - hence I need to start getting up earlier. Otherwise, lately, I just seem to be wasting my days. Not that I minded looking at the scenery and with the peonies just starting to bud it was a pleasure but I don't want too many days like that, to be honest! 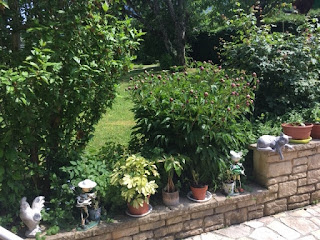 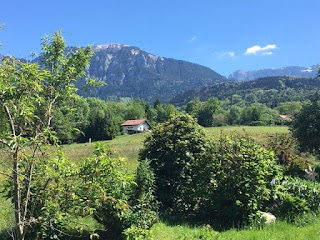 What wasn't a waste though was my Tuesday afternoon yoga lesson. I love it. But, the young teacher is into yoga all the way and occasionally brings in a harmonium for anyone who wants 10 minutes of "mantra chanting" in Sanskrit at the end of the lesson. Maybe it'll grow on me but so far I can't say it's my thing. To make matters worse, you know how when you go to your kids' Christmas concert and the kid who is completely tone deaf is the one with the loudest voice. Well we've got one of them in our group. All I could hear was her off-key screeching and it made me just want to giggle. I didn't want to be rude so just closed my eyes and tried to keep myself in check - it wasn't easy though! But, like I say, this young teacher is excellent - and it turns out she isn't as young as she looks! I had her pegged at early 30s but when she realized I was English she told me she had been engaged to a Brummie (someone from Birmingham, England) about 20 years ago, so easily making her in her 40s. Well I'm a Brummie and with apologies to any other Brummies out there - seriously we have the worst accents you can imagine. If you have ever watched Peeky Blinders you'll get it! She said there was no way she could understand his mother and had to try to just wing it. I laughed when I described the look of absolute horror on my Algerian boyfriend's face when he met my family. His English wasn't very good anyway, and while my family really took to him - he just couldn't understand them!

And talking of Karim, as I was marking off the day on my wall calendar on 28 May I realized it was his birthday. We had got back in touch again when I found out he did an emergency operation one Easter Sunday on a friend's son and her husband recognized him from way back when. Anyway, I sent him a "happy birthday" message and he called me back about 10 minutes later and we are going to get together for lunch sometime soon - and he said he will show me around his surgery. Did well for himself, I guess, but then I always knew he would!

Then on Wednesday I met up with my friend for a drink after I had used the gym. He was in a bit of a "pissy" mood because he had started smoking again and felt rough. So he told me he was going to have just "one more" then give the packet to me to dispose of. Well I just threw them in my bag (although why I don't know because I have never smoked). Traffic on the way home was bloody awful for both of us. I got stuck near the airport at a complete standstill for about 40 minutes and it took me 90 minutes to get all the way home. Again! I tell ya, I don't miss that at all. In fact, one day last week someone posted a travel advisory to "watch out" at a particular spot just after the border because sheep had broken loose from their paddock and were on the motorway. It just keeps getting better doesn't it!

So when I was at a standstill (engine off) I texted C to say that I "felt like a ciggie" - just to annoy him really - so found the cigarette lighter, lit one up and sent him a photo of me "enjoying that ciggie". Yuck! Then of course because I had never smoked I didn't have the right "wrist flick" action to get the ash off that thing. Started panicking looking for the ashtray (which I have never used either) but finally figure out how to open it before I burned my car seats! I guess that'll teach me to play smart ass huh!

And finally, I see the Donald is bestowing his presence on the UK again (and his four adult kids - what's with that?) Not to worry, Queenie can handle him. But while I have never liked him, I have to admit Melania can pull it off in the fashion stakes! I know, lots of money and stylists help but she is definitely a credit to the (mainly US) designers whose gowns she wears! I could have all those advantages and still end up looking like something the dog threw up! Oh well, I guess we all have different vocations in life don't we!
Posted by Treaders at 17:55