Finally it has stopped raining and (I hope) the good weather is well and truly here. I don't mind rain at all but even I was thinking about calling Hertz to see if I could rent an ark, we got that much rain! Anyway, today was just glorious, not particularly hot - around 25 degrees C - so it was a real pleasure to be out and about without the galoshes!  So what's new? Let me see.

Oh yes, the other week I finally got around to buying a stand for a hammock I must have bought 10 years ago. On the rare occasion I used it I strung it up between the cherry tree and the plum tree but when the trees were laden with fruit it/I kept getting crapped on by greedy birds gorged with ripe fruit. It tell ya, it got so bad I had to admit I'm so glad cows can't fly! So I rolled up my hammock and put it away in the basement, never to be seen again! Well that is, until I bought a stand the other week. The stand was pretty easy to assemble and I thought I'd got the height of the hammock sorted - well that is until I sat on it and just ended up sitting on my bum on the floor on top of my brightly coloured hammock. I guess that says as much about my weight as it does about my knot-tying ability right! Still, I think I've got it sorted now, just in time to drag it out into the back garden with all the other sunbeds when my family arrive here for the wedding in a couple of weeks!

What else? Oh, get this, I mentioned before that I play Words With Friends on FB against a few friends and one or two people I don't know. It's a pleasant way to spend 10 minutes first thing in the morning. But I also play once a day against "botts", or computers. I quite like these games because they are instantaneous, just five moves each, and they are over in less than five minutes. Well yesterday I got my best score ever against a bott - 175 points!!!! It was for the word "breezed" but it had a couple of "triples" in there so I was well pleased! Oh, and the creepy guy in Texas who wanted me to give him my email so we could "get to know each other better" - never heard from him again, so I guess we know what that was all about don't we!

Moving on, I was saddened to learn today that the NYT (I think it's them), is no longer going to have political cartoonists on staff. Finished, because of a political cartoon (which I admit I haven't seen) about Netanyahu which wasn't even produced by their cartoonists! Wow! I guess I'm not totally surprised that events are moving in this direction but it really will be a sad day when political cartoonists can no longer weave their magic won't it! And finally, I mentioned previously that I had sent birthday wishes to my former BF on 28 May. He called me shortly thereafter and said let's have lunch when he could fit it around his schedule. He's a surgeon and I'm retired so I guess we go with his flow, right! Anyway, we agreed to meet up near his surgery and ended up having lunch in the inner courtyard of Geneva's natural history museum (I love natural history). The food was excellent and even though we go back 40 years he and I still hit it off like a house on fire. He was good company and although I'm fatter and he's balder you wouldn't think it had been 35 years since we dated! When he realized my family were coming out for the wedding he asked if we could all get together for a drink as he really liked my family (and they him)! Although we didn't end up together isn't it nice that we have remained friends to this day! 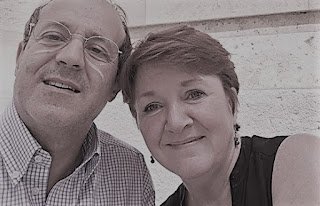