After four days of pretty crappy sleep I think things are starting to settle down a little. This kind of thing happens every so often - terrible sleep and nightmares - lasts about four days and then things go back to normal. I've no idea why but I know there seems to be a cycle, and I'm trying to break it with yoga and better habits. One of the "habits" I'm starting to get away from is blog reading in the morning. When I get up I have my breakfast and read the news online. But if I start blog reading I can be online for hours and end up pretty much wasting the whole day, so I'm trying (and so far succeeding) to keep my blog reading for the evenings. Anyway, this morning I was up and out and off to another market in a town called Bonneville and I think I just might make this my local market - well for a time at least.

I wouldn't want to live in Bonneville as the traffic is horrendous. Whichever way you come at it it is just two-lane, nose to tail traffic. I know people at work who live in Bonneville and you struggle to make it to the motorway exit and end up with just a couple of kilometres to go - and it can end up taking you another 45 minutes! So nope, there's no way I would want to live there. Buut, I have to say it was a great little market, probably just a little bigger than my town's, with little bars and cafés all around. So I had a shufty, bought a couple of things and then decided to enjoy the sunshine and sit and have a drink before heading back. 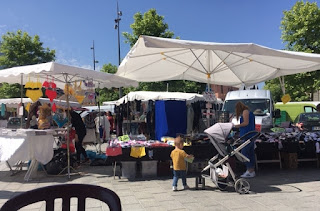 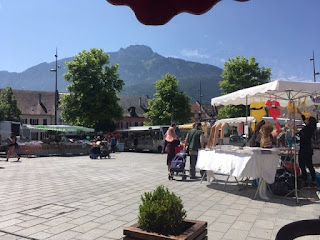 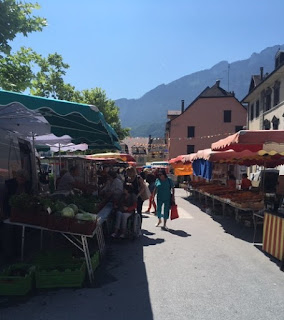 On the way back to my car I stopped to admire what looked like allotments but were most likely private gardens. Very, very long and pretty wide and full to the brim with beautiful flowers and veg. These were older homes and today you would never get a garden like that round here, so those people are very lucky - but they are certainly making the most of them! I follow a site on FB called Un Jardin au Paradis - which is a local small-holding pretty much built from scratch and given over to sustainable and organic farming. They are offering one-day courses on 14 and 16 June so I think I might go on one - not that I have that much land anyway - but it is a subject that really interests me. A friend went on one of their courses and loved it. Which makes me think I must go up and visit her. She has quite a bit of land (she used to keep donkeys) and I am keen to see if she has put any of their ideas into practice. A propos of nothing, she is also a vegan, yoga teacher, having completely turned her life around from being a pretty hard drinking, pot grower! She's still great fun either way!

On my way home I stopped off for a hair appointment. I had taken the scissors to my hair a couple of weeks ago when it got on my nerves. I routinely do this, but eventually have to go and get Christelle to clean up my messes! I mean, fancy hacking at your own hair three weeks before your son's wedding! Must be nuts right! Anyway, while she was peering in disgust at the bird's nest that passed as my hair she asked what I had studied at university. When I said "languages" she just said "right, well leave your bloody hair alone"! I've known her for years so I wasn't the least bit insulted - and she was right anyway!

When I got home the wind started to pick up. I guess we might be getting the tail end of the dreadful storm that has hit the west coast of France. Just my bloody luck as my roses and peonies are finally started to bloom. There probably won't be a head left on them by tomorrow morning! 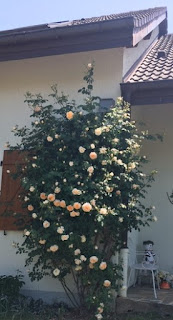 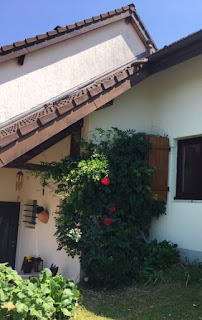 I had a quick snack of one of my newly-minted organic peaches smothered in Greek yoghurt and honey which was to die for! Seriously, if I ever got the death sentence, say, for murdering someone in Texas or dropping litter in Switzerland, I swear that would have to be my last meal! Then I settled down in my back garden to translate the order of ceremony for the wedding into English. I kept putting this off but realized I had to set to at some point. It took me about two hours and tomorrow I want to spend another hour on it de-franglicizing it with fresh eyes, just in case. Other than that I'm on track, but there is stuff in there that Jen asked me to keep secret from Jordan as she has some hush-hushh stuff going on! My lips are sealed!

And finally, we were informed through the retirees' association yesterday of the recent death of a colleague. Sylvain was only 62 and it hit pretty near to home I can tell you! I know "of" him as I would have input his file into the computer when I worked in HR. I also knew him personally, although not well at all. I have no idea how he died but 62???? Seriously! And I'll say it again, I'm so glad I made the decision to retire when I did. Just have to step up the work on the healthy lifestyle now!
Posted by Treaders at 20:51