The first week after I retired I was back in work using the gym when I bumped into an old HR colleague who had retired five years earlier. After chatting for a while she said "why don't you join us on the committee of the retirees' association - having been in HR you know the pension fund and sickness insurance plan inside out"! I told her I had only just retired and wanted to have some time to get used to that fact and see just how committed I would be to taking on any new responsibilites. Then, as I was walking down the corridor to get to the gym I bumped into another retired colleague who was coming from a meeting on the sickness insurance plan and she said "oh why don't you join us on the committe, we need fresh blood"! Same response. A couple of weeks later I get an email from P, the former head of HR who I worked with for years, asking the same thing! Again I gave the same answer. I'm not against getting involved in this kind of thing but I really felt I need some time to just "be" retired! Anyway, last week I attended my first annual general meeting of the retirees' association and it was actually pretty interesting. The number two boss of the whole organization gave us an update on what was going on within the organization, how it had become increasingly more politicized and the difficulties they were having trying to get trade disputes resolved amid some of the tactics being used by certain Members! He told us of a recent incident where the Ambassador of a Latin American country took the floor and several Ambassadors walked out on the pretext that they did not recognize this Ambassador as the legitimate representative of his country! Wow, firey stuff! (If you picture the UN, you'll get the idea, although it isn't a UN organization).

Anyway, the meeting was well chaired by my friend, with the exception of the fact that he kept forgetting to turn his mike on when speaking so the interpreters couldn't hear him!!! It was quite funny actually as everyone started laughing each time he went to speak and realized he hadn't turned the mike on again. The retirees reps on the various committees then gave a summary of the goings on in each committee and we were pretty much wrapped up after a couple of hours until a miserable sodding French Canadian decided that he was, yet again, thoroughly unhappy with life and everything in it (this was a permanent feature of Mr. Complainypants) and went on a pretty rude rant about how everything was badly done (why don't you get involved yourself then you miserable git?) and kept taking the floor to add to his litany of complaints! This was then followed up by a thoroughly miserable Chilean (we used to refer to him as "Happy H") who more or less did the same thing and tried to spring a major change on the representative to the pension committee at the last minute! No forewarning at all! Now we're not talking self-important members of the village hall committee here. We are talking about a pension fund with millions of Swiss francs in assets - said pension fund being now 20 years old after having been set up when we pulled out of the UN $-denominated pension fund in 1998.  So the sh*t hits the proverbial fan a couple of times before my friend managed to get it calmed down, but some people!!!! I guess we all know people like them. Nothing is ever right, they are permanently dissatisfied and permanently miserable, and if they can make everyone else's life miserable then so much the better! Didn't work this time though I have no doubt they will keep trying!

After the meeting closed most of us went out to lunch and it was really good to see everyone - and how well they looked. One lady had recruited me in 1980 and here she was at the lunch, 93 years old and looking great. Snow white hair, bright red lipstick and still a very attractive lady. S was there also - the lady I replaced when I moved to HR on her retirement in 1994. She is 84, has a kinda buzz cut hair do and looks wonderful. Now either retirement agrees with most of these people or the ones not doing so well couldn't be bothered to come to the meeting! But, I did get nobbled at the end of the meeting when P came over and again asked me to join the executive committee of the retirees' association and I caved!!!! For the most part we are former HR staff members because we knew the subjects dealt with inside out but I really had been hoping to hang fire for a bit - it was not to be apparently!

It was funny too because as I went back to the gym there was, yet again, another red carpet laid out for important visitors (not me obviously!). This time I saw the Prime Minister of Jamaica getting out of his official car and the King of Swaziland (now called Eswatini). When I asked a colleague why these visitors were here it turned out that it was the 100th anniversary of the establishment of the International Labour Organization, said organization having initially been housed in our building. So quite a few dignitaries had also stopped in to our (listed) lakeside building to see how it had been renovated. Eventually the ILO moved out and on to bigger premises so we had the great good fortune of being the only international organization actually located on Lake Geneva! 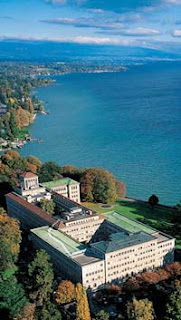 Again on the subject of joining the executive committee, I suppose I really should give something back and participate in some of these committees because we really do have very good benefits as both active and retired staff, in particular our medical insurance plan, which was negotiated by B, my former boss! In fact he drafted the rules and regulations of the new pension plan too (which meant I got to type them about a million times), as well as the Headquarters Agreement, whereby we left the UN common system and the Swiss handed the above building over to the organization for free!  So yep I do know quite a bit about the various agreements, not because I was particularly smart but because I typed the darn things over and over and over again!

Anyway, as I said our medical insurance is wonderful. It was cheaper than my ex-husband's (who worked for the UN) but with much better, worldwide coverage and an annual deductible of only 300 Swiss francs! It was bought home to me how good it is when I went to the dermatologist in Geneva last week. Medical settings in Geneva are so luxurious compared to France, but then they cost about four times the price. My lovely dermatologist (Dr. Twinkly Eyes) had broken his foot so I got a young female doctor, young enough to be my daughter (ouch) but she was very thorough and had her assistant laser something off my leg "just in case" since "your skin really doesn't like the sun does it!". You can say that again! Now Doctor Twinkly Eyes used to freeze anything off with his pot of "steam" (which made him look like something out of Harry Potter) but this time she lasered it - ouch! That hurt! Anyway, she then gave me a prescription for an antibiotic cream just in case, so I tootled over the road to the pharmacy and again I was amazed at how luxurious it all is. There were armchairs for people waiting to be served and then the pharmacist asked if I would like a coffee while I waited!!!! Again, I know all this has to be paid for but wow - talk about service!

Then yesterday I again drove in to Geneva to have lunch with friends. We do this about once a month and another group of former colleagues meet every Friday afternoon for coffee (although I don't go to that - it means hitting rush hour traffic to get back). Very nice it was too. But when I was walking back to my car I spotted a lady I used to occasionally see on the bus - the lady with identical baby triplet girls! Now this lady was amazing, the epitome of calm and seemed to sail through getting round Geneva with those babies like it was "no big deal". Well the triplets would seem to be about six by now (beautiful little kiddies too) and this lady had a newborn strapped to her chest in a baby carrier! Say what! This baby must have been one or two months old but really!!! She's braver than I am. If I had had triplets I don't think there was any way I would have had another one, but they certainly made a beautiful family!

Oh, and on the subject of nothing in particular - get this. I read somewhere recently that it is really easy to grow your own celery. The lady mentioned cutting the stalks off the celery and "replanting it". Now I wondered how those stalks were going to re-grow (I'm a bit dim sometimes) but then I realized that you replant the root and guess what, it works (but then why wouldn't it!). In just a couple of days my celery started growing through. Fascinating stuff (but then I'm easily fascinated)!

And finally, I saw on FB that the motorway near my house had been closed again because of a car going the wrong way! This was the second time in 10 days, and my first thought was "another hold-up in Geneva". And sure enough, thugs tend to come to Geneva from around the Lyon area of France (rich pickin's) and then hare back off over the border to get away, oftentimes going the wrong way down the motorway so that the police won't chase them. Now I'm not sure if that is what happened this time but I later learned that there had, indeed, been another hold-up at the petrol station right next to the border in Geneva so who knows. Thankfully nobody was hurt but really??? I hope if they do wreck (which they will eventually) they are the only people who get hurt/killed!
Posted by Treaders at 10:14