Gonna be offline for a few days!

With son number two's wedding celebration next Thursday and family arriving on Tuesday I guess I will be offline for a few days. I'm really looking forward to it but I wish this heat would go away. Apparently it hit 45°C (113°C) in France today and the French have been pulling out all the stops to try to make sure the very young and the very old are getting the help they need, since the last time we hit these kinds of temperatures 15,000 French people died. I've had three cold showers today already as it's unbearable!

It was just a little cooler on Sunday when we had our annual clean-up of the neighbourhood (followed by an hours-long pot luck, which was again very good). One of our neighbours is moving out in August so invited the new, young owners to come and meet everyone, with several former neighbours also stopping by! It was very good as usual but I imagine there were a few sore heads the next day (and a few emails sent around saying "has anybody seen my …." - you know the different pots and dishes that kept getting misplaced). 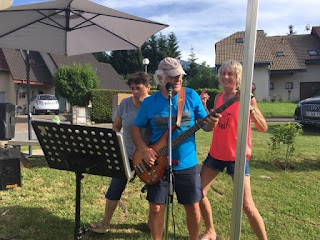 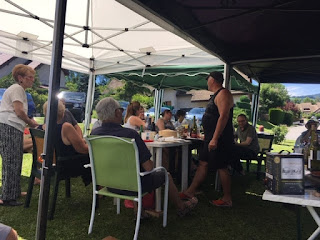 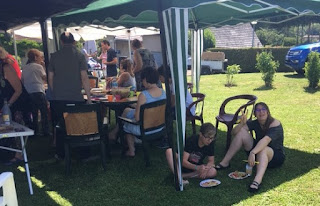 Jen came over today as she had asked me to translate her vows into English and then practice them with me. As Jordan says "she puts "h" in all over the place where they aren't needed" but it's cute and as long as she speaks slowly enough we will all understand her. She'll probably burst out crying anyway as she is emotional so it could be a feat to get through it.

Then the other day, "the mates" showed up at Jordan's work to take him out for his stag night. They had him all dressed up and made-up (in front of his boss, who took it in great sport), and then dragged him out to the village fète in their little village. Said they had a great time! After that a bit of bar hopping, a restaurant and a night club, so again a few sore heads the next day I guess but they had two designated drivers and André texted Jen at 4 a.m. to let her know that they were sleeping it off at a mate's house and all was good! 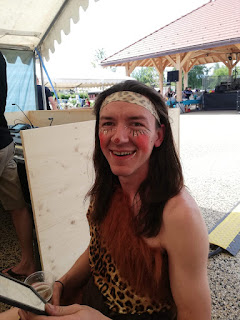 Jen said there had been a bit of friction about some of the last minute wedding arrangements and I pretty much nailed it that most of it was caused by my ex being his usual d****head self. He is insisting that "someone" pick them up from the airport and then run them around, and it looks like being my oldest, who has a lot of running around too himself with friends coming from Zurich and the photographer coming out from England and staying with them. I already have two trips to Geneva airport that day and I'll be buggered if I'm picking him up anyway. Why the hell doesn't he rent a car? It's never been a problem for him before! And then it occurred to me he just might not have a driving licence any more (that was a bit of a speciality of his over here)! He and the kids are going out to dinner on the Wednesday night but then "he will need to see his mates at Ghys Bar in town" - at which point the wives said "no way José". Jen doesn't drink anyway and with my ex it has never been a question of "just one drink" - it was usually an all night bender and none of the kids are interested in that. Plus it's a scuzzy bar anyway, why would you want to even go there? Oh and that's where he met the barroom skank he left me for in 2010 (not the latest gf), so I can understand that the kids have better things to do than that. But yet again, it is my selfish ex thinking everything revolves around him! Could be interesting (but I damn well hope it isn't)!

And finally, did anyone (in the UK I guess) see the Piers Morgan programme called Psychopath last night? Wow! Now I can't stand Morgan but this young man's "reading" on the psychopath scale is apparently off the barometer - and he looks it. Since I had an absolute psycho of a boss some years ago I actually became fascinated by them - they are so interesting (and scary), so I've read up a lot about them because they are just so unfathomable! This young lad, Paris Bennett, manipulated the baby sitter into leaving the house and then stabbed his four year old sister 18 times "in order to see his mom suffer". He was just 13 years old at the time and as a minor he will indeed be eligible for parole in a few years. His amazing mother has stood by him as far as she can, but since in the meantime she has had another child and pretty much expects him to come after her and her new son if and when he gets out, she knows for her own safety and that of her young son she will have to "disappear off the face of the earth" if and when parole is granted! Wow, she was an amazing lady who had suffered so much but has still tried to "be there" for her son as much as she can. But I have to admit I have never seen such cold, deadly, emotionless shark eyes in my life! Scary indeed!