… we set off again en route to visit Sigiriya Rock, also known as Lion Rock because of the two enormous lion paws carved into the rock. It was here that you could see the ruins of the fifth century "Sky Fortress", which was built in just seven years years as a fortified palace for King Kassapa - who became king by assassinating his father and deposing his brother. I guess there's a "black sheep" in every family then isn't there! Said brother managed to take back his "kingdom" 18 years later though - so it all got a bit complicated for me to follow! But it was a beautiful site, although a hard climb in horrendously hot weather meant we had to start off pretty early to beat the crowds and the heat!

After lunch we headed out to a game park to go elephant spotting. It wasn't difficult, actually, because there turned out to be quite a few elephants for us to "spot". The Canadian lady traveller made a valid point though in that she felt that there were just too many jeeps allowed into the park at the same time. We counted 25-30 jeeps in one spot and while none of the jeeps deliberately got close to the elephants, as the elephants wandered on their way sometimes we felt that we really were just too close to them. I can't say we felt in any danger - more that we were crowding them out. Still, I was very glad to have seen them - they are so impressive, even if they are not as big as African elephants! 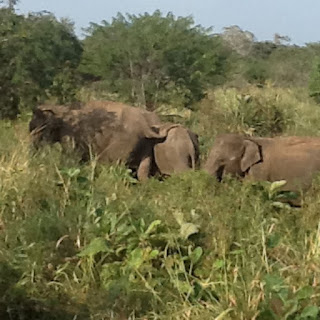 After that we headed on to our next hotel - which again turned out to be a pretty nice place. It was quite late by the time we got there so it really was a case of get washed up, eat and go to bed because we were on the road again to Kandy the next day! 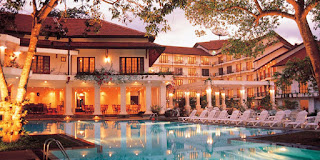