I am so spoilt!

Things are beginning to calm down a bit now and hopefully I'll start getting into some kind of retirement routine. I had all kinds of plans for what I would do each week as I had a vague feeling I might be "bored" without the discipline of going to work - but not a bit of it! In fact, I have had to rein in my ideas a little because I now realize I don't want to have every day "scheduled". So far I have my sewing club on a Monday night, Tuesday afternoon yoga and on Wednesday I go in to work to use the gym, meet up afterwards with friends for a drink quite often, and do any "Geneva" shopping I need to do. I was going to join a Thursday hiking group too but as time has gone on I realize that I want to keep a few days clear to do my own thing so, for the time being at least, I think I'll leave it at that!

I also decided that I was going to get in touch with all the people I had always been meaning to keep in touch with but didn't get round to it very often because work got in the way. So I have been contacting a few old friends and arranging to meet up, if possible. Oh that and catching up on all my doctor's check-ups and other necessary evils. I suppose getting the paperwork together for my French residency/naturalization request will be the next thing. Anyway, I have an appointment at the bank on Tuesday to arrange the final pay-off of my mortgage and am meeting up with a very old friend on Wednesday night for dinner. When I say "very old friend", I mean we actually met on the first day we arrived in Geneva in May 1980. Our employer had flown us both out from England and put us up in the same hotel for the first week, so when I realized she would be working at the same place as me we got chatting and the rest, as they say, is history! She didn't stay with my employer too long as she moved on to the World Health Organization but we have stayed in touch sporadically over the years.

Then last week I got in touch with a colleague who retired one month before me. She lives about 500 metres from where my ex husband used to live in fact so she isn't too far from me. Anyway, we agreed to meet up for tea and a chinwag in her local town, and very pleasant it was too. 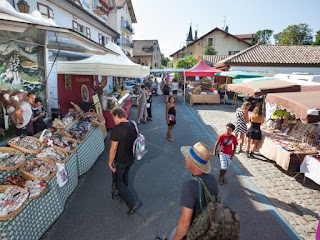 Like me she is loving retirement, has loads of interests and agrees that there never seem to be enough hours in the day! I know everyone says that in retirement but it certainly seems true for us. Before I met up with her I managed to fit in an hour's walk through La Bénite and fill up my bottles with spring water. On the way back my neighbour (the farmer's sister) invited me for an apéritif later, so that's where I ended up after my trip to Viuz. I guess Isabelle had heard through the grapevine (my other neighbour, I imagine!) about her brother asking me out, and she and her partner got a real laugh out of that! In fact Rémy kept getting a fit of the giggles! I told her that her brother had been a real gentleman and was actually quite good company - it's just that I'm not looking for anyone. She didn't dispute that he "can actually act like a real human being when he has to" but said it's just a shame that he has always been such a jerk to the sisters! I believe her actually as he does have a bad reputation but I had to at least let her know that he was a gent with me. It's weird when you think of it, though, that she and her sisters have never seen the inside of the house he renovated and I have! It's also weird that his wife was dead and buried before any of them found out! A strange family dynamic (but not necessarily all that unusual round here where families often live so close to each other), but we all had a good laugh at the idea that, as she put it, "we could have ended up being sisters-in-law"! Nah, that's not going to happen!

Then today I finally got to use the retirement gift my former colleagues gave me. I hadn't had time previously, what with all that was going on in my life, but today at last I was able to write to them and thank them properly! They had given me a Smartbox - for those that haven't heard of them, it is kind of a gift voucher where you get to chose from a wide range of "experiences" available from service providers who sign up for it. More often than not it's facials, massages, and so on, so I decided to use it for a one hour massage at a spa in Geneva that I had never visited before. And oh how lovely it was! Turns out I got the entrance to the spa included, a lovely, relaxing massage, another free entrance to be used at a later date - and a free drink and cookie! What's not to love!

After the massage I decided to take advantage of the sauna (not my cup of tea really - way too hot), then the hammam (I'm starting to like that) and a room where you sit and enjoy various natural scents which are supposed to be very relaxing (not sure what they call it - I called it the "smelly room")! After that it was in to the jacuzzi which was completely empty but to be honest I wasn't too impressed! I sat there for about 10 minutes thinking "well this isn't much cop" until a man got in and pushed the "start" button!!!! What a dillon! I hadn't realized there was an "on/off" button! There's an expression in French which basically translates as "I forgot to take the straw out of my clogs" - or "take no notice of country bumpkin over there" - talk about looking like a bloody idiot! After that, it was into the main baths, which weren't very full given that it was a Friday afternoon, on for a free coffee and cookie (!!!!) and back home in rush hour traffic which, for once, wasn't too bad at all! So gosh what a successful day that turned out to be! Now my skin feels soft as a baby's bottom and I'm all weak and wobbly (or "wobblier" more like). So yep, I think I can get to like this retirement lark! 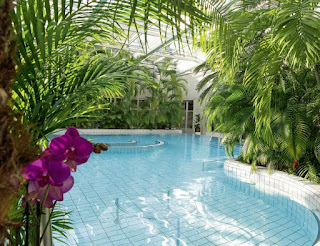 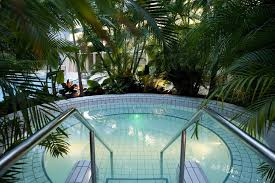