I was planning to host our board game evening in (January or February - can't remember now) when I had to cancel because of having to dash home for my brother. They went ahead without me but I signed back up to host yesterday now that things have calmed down somewhat. Anyway, yesterday I was heading out to our little local market to pick up a few fresh fruit and veg for the game night when I decided to stop in at our local Mairie to ask for an "attestation de résidence" - an attestation to prove how long I have been living in France. One way or another I guess I will need this to prove that I have been registered as living in our little village for more than five years - since 1990 in fact - whether it be for my resident's permit and/or naturalisation request.

I asked the young woman to to put "Ms T., formerly Mrs B" on the attestation as I was married in 1990 when I got my first resident's permit so I needed it to be clear that Ms T and Mrs B were the same person. Luckily for me I knew the exact date of my arrival in France (17 April 1990) as it was more a "paper and post-it" set up then and she had no way of knowing when I arrived! I wonder how many others will be scuppered at that point! But she had the same problem as me when I go onto the French website regarding resident's permits because (a) I don't have a blue EU resident's permit (because I don't need one), (b) I'm not considered a first-time permit-holder (since I had one in 1990 - shortly thereafter I no longer needed one), and (c) I couldn't really apply as a "non-European" because I bloody well am a European - just shortly to be non-EU citizen. What a bloody mess! Anyway she said she will have my attestation ready for me when I stop in on Tuesday, but then she started reading off the list of requirements for a bog standard resident's permit:

I did admit that I did not know the words to the Marseillaise but she told me that like most French she didn't know the second verse either (I mean, who actually knows the second verse of God Save the Queen?)! So I guess we can call that a "check"!

Anyway at this point the lady who did my original paperwork when I first moved here walked out of the back office. She knew my ex and my kids and did the paperwork when I came in to register my second son in 1992. She was stunned to find out that my "baby" had gotten married last week! But aren't we all the same! I mean, you see your own kids getting older but don't realize that other people's kids are too! She and I always got along and she told me that there would be no problem getting any paperwork I needed once we all knew what we were dealing with with this Brexit debacle! Oh but she did comment that joking about looking for a French man for a marriage of convenience might not be the best thing to do in the local Mairie! Thankfully they all burst out laughing as I guess they get my sense of humour, but I told her one husband was more than enough thank you very much so there were no worries on that score!

Anyway, back to the plot. We had our latest board game evening at my place yesterday. There were only nine of us this time but it was still great, and I think we might be getting into the hang of not cooking too much food for one evening! We seem to be getting it down to a fine art! On a side note, today is my next door neighbour's birthday and she was spilling her heart out to me a bit yesterday, so I had everybody sign a card I had for her (and took her peppermint brownies round today as a birthday present). She was almost crying when she opened the card as she told me that her husband hadn't even acknowledged her for the last seven years! Go figure! She just breaks my heart! Anyway, back to our evening. The first game we played was "Time's Up", which I can't say I particularly enjoyed as it was "way too French" for me for the most part. What I mean is, it was a French game so obviously most of the questions were French orientated. For example, do any of you know how you would get someone to say "Natoo" - or even who "Natoo" is! No, I didn't think so. Or which famous French actor played in "Un gendarme à St. Tropez"? Still, it wasn't too bad as being the hostess I was bobbing up and down and clearing plates and making sure everyone had enough to eat and drink. But, afterwards we started another game (around 11.30 pm I think) but I can't for the life of me think of the name. This was much more "egalitarian" in that it wasn't French orientated. Trouble was, it was the kind of game you couldn't just abandon when the witching hour arrived! We had to play it out to the end! Which turned out to be around 1.30 - 2 a.m.! Which in turn meant I got to bed around 3 a.m. after clearing up! I did mention though that it would be kinda nice to play a few card games next time - Bellote, Tarot for instance and the others agreed. Oh and the subject of the farmer asking me out came up (I wonder how they found out) so I was the butt of quite a few jokes and guffaws of laughter! You see, he is well known for being somewhat of an ass but I felt obliged to defend him for having been an absolute gent and good company when I was with him. Ha, they won't laugh so loud and so long when I am the mistress of all I survey if I take him up on his offer of a date (extremely unlikely but they don't know that)! Anyway, just a few pictures and I hope to post more about Sri Lanka tomorrow! 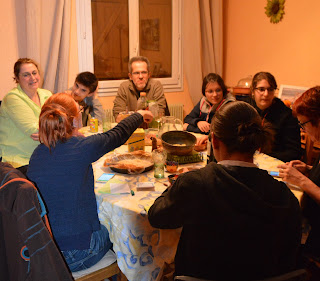 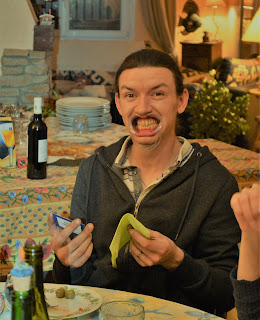 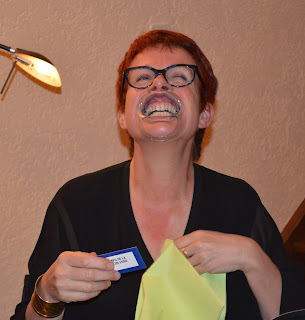