How to waste an entire morning!

I haven't really gotten my head straight since getting back from Sri Lanka on Monday but I will post more about the trip when I get my thoughts together. Not that buying a Rubrik's cube helps with getting anything done! You see, when I go away I am always looking for small souvenir-type gifts to bring back for my kids and a few friends. Nothing "souveniry" in the sense of a decorative dust catcher, but usually something consumable or useful. This time I bought back wonderful spiced cashew nuts, which feature widely in Sri Lankan agricultural production, so they won't be gathering too much dust I imagine. I bought other things back too of course, but I am also always on the look-out for Christmas presents/stocking fillers! Just on the off chance! When I was in Costa Rica this time last year I bought back beautiful photo albums - they almost looked like they were made of papyrus - and Jen told me that she is going to put their wedding photos in it as she loves it so much!

Anyway, this time I picked up some beautiful silk scarves for the girls and a few other small items buuuut I spotted Rubik's cubes in a small toy shop in Galle and something clicked. Now I don't know that Mr. Rubik was Sri Lankan (probably not, don't you think), but I remember having one when they first became popular and learning how to do it. Can you believe they first came out in 1974!!! Crikey, I'm showing my age now. Of course, after a while the craze wore off and I forgot how to do it, although I'm pretty sure I still have it somewhere. So, me having a warped mind, I like to buy small Christmas gifts that are either silly or drive you slightly nuts! Last year I bought my kids Mad Libs and got the biggest grin out of my sons as they remembered all the stupid "stories" we put together when they were young. Of course all the nouns or verbs we provided were generally along the lines of "fart" or "onions", so the finished story usually ended up being pretty silly. Still, they both like that kind of thing! Anyway this year I am already thinking of Where's Waldo/Wally books (they have different names in different countries) as I know it is the kind of thing my boys get a laugh out of. I know, I know, but it's easier to buy for the girls - my sons get what momma here thinks will amuse them!

Anyway, to cut a long story short I bought three Rubik's cubes, two for my sons and one for me. But of course, as I mentioned, I had forgotten how to do it! So yesterday morning I spent almost four hours watching a Youtube video on how to put it back together! I completed it several times in time with the video and so far have memorized about two-thirds of the moves, so I'll be back at it tonight. But talk about a way to waste your morning! Thankfully I'm not quite this obsessive with most things! I had a drink with my friend last night and mentioned it to him and get this - he is completely impressed and wants me to teach him how to do it (hey buddy, you can get Youtube too), so I'm thinking I already have a good idea of what to get him for Christmas too!

On a different note, while I was in Sri Lanka I could only occasionally check my emails or read my favourite blogs as the internet was often very iffy - hence the lack of comments on other people's blogs. But one day I got an email from FedEx about a parcel that they were trying to deliver and apparently I was to "click here"! I didn't of course because I frequently used to get these kinds of scam emails at work, but since the email apparently came from a work colleague who did, indeed, work in my employer's mailing room, I wrote to him and asked him if it was legit. Turns out it was, and in recognition of my long service my employer sent me a personally engraved plaque which is actually rather nice, plus a signed letter from the Director-General. Now I'm not usually one for the old "carriage clock and pen" kind of leaving token, but I have to admit this was rather nicely done!

And finally, Brexit! We were talking about that weren't we!!!! Well, as someone who is intimately caught up in the whole debacle by virtue of being a Brit living in France, I signed up for a link to the UK Government website which is trying to handle this whole bloody mess, and to be fair, they are ploughing out the information in what seems to be a very efficient way. Now as someone who has a slight inkling of just some of the problems that are heading the UK's way (my former employer dealt with international trade), I have to admit that even I had no idea how bloody involved and complicated this whole matter is. And to think people were asked to vote "do you want to stay in the EU or leave"? As simple as that! I took a screen shot of my inbox showing the emails I get on a daily basis just from this UK Government website, and I would say, in all honesty, I get three times this many emails per day on all the different issues they are having to deal with! Bloody hell, glad I'm not responsible for that! 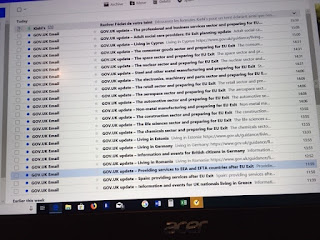