I'll be damned if I can understand it!

I was almost excited to weigh myself this weekend as I had been so good last week, both watching the calories and exercising every day so you can imagine how I felt when the scales told me I had put 3 lbs back on!!!! I was down 7 lbs and now down only 4 so I give up. Well not really because the odd thing is a colleague saw me at the bus stop last week and mentioned "how much weight I had lost" and then yesterday, my office colleague who had been away in Paris for the week said she was "stunned at how much weight I had lost"! Seemingly the first thing that deflates for me is my belly (which isn't a bad thing) so I actually had two colleagues pointing out my "weight loss". I know they say muscle weighs more than fat but I know in all honesty I'm not at the point of developing muscle yet with my puny little regime but I'll take the compliments even if I still can't get my head around this weight loss malarky!

On Saturday night we had our fourth (or fifth - I can't remember) board game evening at my neighbours and since we felt we were spending too much time eating lately and not enough time "board-gaming" we decided that those of us who could make it would go round to Isa's for 4 o'clock for an apéro and then we would eat a little later and play games after that. Since she only lives on the other side of the hedge from me I was one of the first to arrive so while we waited for the others to show up we played the game of "guess who I am" or "guess what I do" - or something like that. For the first game we each had a post-it stuck to our foreheads and we had to guess who we were by asking "yes" or "no" questions. Sometimes it can be slightly more difficult given that we had two different nationalities and each country's "celebrities" might mean nothing to the others. For instance, I remember my ex banging on at me one time about how I must remember The Honeymooners, but nope, I'm pretty sure that wasn't on TV in England when I was growing up.

Anyway, I had myself figured out to be male/deceased/English and a writer. So I said "was I born in Stratford?" My English friend said "yes". "Was I married to Anne Hathaway?" My English friend said "yes". "Did I write Romeo and Juliet?" - again yep! So then I said "I have no idea" and they all burst out laughing. (For what it's worth I was Shakespeare!). After that we had to guess what activity the others were miming. I was a rotten bugger and put "giving birth" as one activity and that was picked up by poor old Michel, who was a good enough sport to give it a shot, although judging from his efforts I'm pretty sure he had already had an epidural! 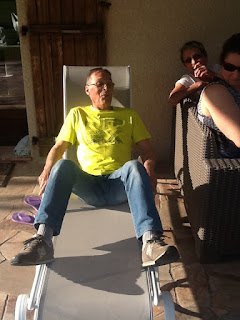 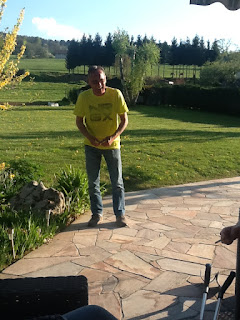 At this point I will be decent and not put up the picture of Valérie who had to be "constipated". She was bloody good sport though and gave it her best!


In other news, I finally got a small "Snapfish" album completed for my son's birthday next month. This is only the second time I have used it and it is quite fiddly, plus some of the photos were photos of photos so not optimal but either way, since both my kids are forever looking through my photo albums I think he will really appreciate it. 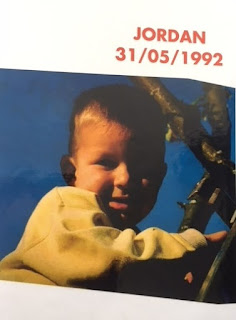 I realized after I had taken a photo of the cover page of the album that it looks wonky. That must be the sun because it really wasn't. I hope he likes it.

And finally, as I made it to Geneva in good time this morning I was able to hop off the bus and walk the last 30 minutes into work, in absolutely perfect walking weather. As I was tootling along the lake I passed one of the stately homes that I pass most days and decided to take a photo of it. I think this one is the Villa Barton and most of the parkland around here was bequeathed to the City of Geneva by the owner, Lady Barton, upon her death. Can you imagine what it would have been like to live in such a beautiful house which, if the truth be told, is nothing special in the grand scheme of beautiful houses, but I think it's lovely - and what a view! Just stunning! 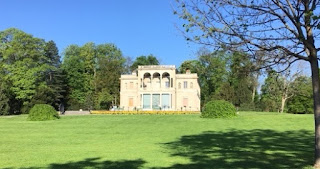