Well this weekend was a vast improvement over last weekend both in terms of the weather (which was great - finally) and in that I felt so much better. I had to drag myself through work on Thursday and Friday and on Friday night I slept over 11 hours - I'm surprised my bladder didn't explode!!! But man did it do some good! So on Saturday I was up and fresh as a daisy.

Buuuuuuttttt late on Friday night I initially couldn't sleep so was still up at 11.30 reading when I heard "boom, boom, boom" - absolutely roaring bangs! My first thought was "fireworks" but then I realized you don't let fireworks off at 11.30 at night - you start when the sun goes down. Then I thought, "oh they're triggering avalanches" as this is the season to be wary of them. But again, you don't do that at 11.30 at night. I couldn't figure it out but eventually went to bed and slept with the fairies (see above). Found out next day that two "individuals" had been filmed on security cameras at the petrol station/gas bottle station of the local supermarket setting light to the gas bottles!!!! How stupid do you have to be!!!!! They had their faces covered but were obviously a bit thick as it only took 12 hours to pick up the two of them. There was some gossip about "terrorism" but honestly, if you want to hurt people you don't do it at midnight. Then "maybe it is someone with a grudge against the supermarket". Turns out two 16-year olds have been taken into custody and placed with social services pending appearance in court. Apparently about 20 gas bottles went up, with one landing really close to the petrol pumps, but thankfully no-one was hurt - although how those two idiots weren't killed is beyond me! 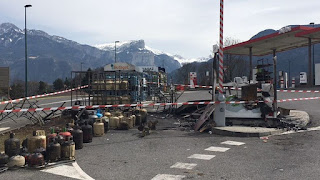 Anyway, after all the excitement on Saturday morning I had to run down to a local village as I wanted to book my friend and I on another day trip to Turin market. The company we have been with twice already never replied to my email about dates but this company seems to be much bigger and much more professional, so we are booked in like two little old ladies with our granny bags for the trip on 26 May (departure 6 a.m. - yikes). I know we've been a few times but it really is a nice day out and you can get some good bargains too, as well as the wonderful fruit and veg!  I was talking to the young woman who did my reservation and asking about bus trips to Cinq Terres (Italy), which isn't too far from here but she said that they hadn't made any plans so far this year but that they certainly would be doing so because there is so much interest in it. It would be a four/five day trip so I will definitely look forward to that. In fact, Jordan and Jen are going for four days in May at a wonderful price through Jen's work - lucky buggers, but I'm glad for them as even though they are not the international jet setters André and Lily are they definitely do some good trips too (Rome was the last one). 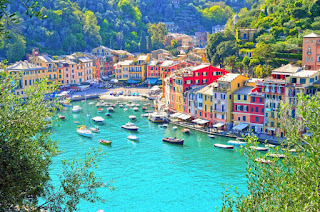 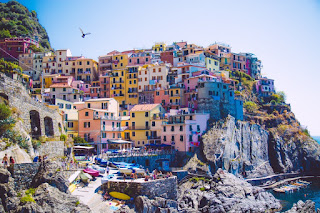 Since I am still working I am more interested in day trips at the moment to be honest so I might try their day trip to Lyon. Lyon is only 90 minutes away but I don't know if I have the nerve to drive round there any more as they drive like lunatics. Plus of course on the bus the driving/parking is not your problem. We used to joke when I was young about the old biddies on their day trips to Weston-Super-Mare - guess who seems to have become one of the old biddies now!

After doing my usual Saturday morning run around I decided to take another trip to the new local organic shop. Finally it seems to be taking off around here so we actually have some choice. It is of course hellish expensive but I realize I am still wasting food so maybe if I bought less, but better quality, even it it is more expensive, it might be a positive. For me the test of "is it worth it?" is the taste, and the ultimate taste test has got to be strawberries and tomatoes. I had already bought strawberries at the market so I picked up some tomatoes at the organic store and yes it definitely was worth it! The plastic, tasteless stuff we get in the shops is so disgusting that I generally don't bother anymore until my own, homegrown toms come in. I'll see how it goes but I think buy less but better might be the way to go, for me. A first world luxury I realize but I am on my own!

Talking of "growing your own" I was chatting in the back garden with my neighbour while he was cutting back branches, so I asked him to save a few for me as stakes for my tomato plants. I think he must have supreme confidence in my tomato-growing ability don't you - those suckers are almost two metres long!!! 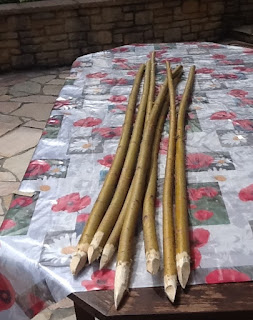 Then on Sunday I ended up going all round the reekin to find one of the first vide-greniers (car boot/garage sales) of the season in a lovely little village called Arbusigny. It's not far from here but I kept getting diverted because of roadworks. Not much there of interest but at least it was a trip out. After that it was on to a very well organized garden/plant/local skills themed fair in another local village. While the weather was overcast it held out which was great as there was quite a bit to see. 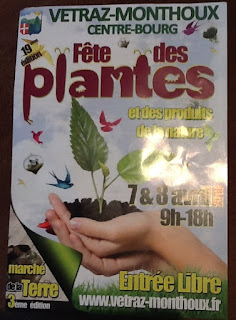 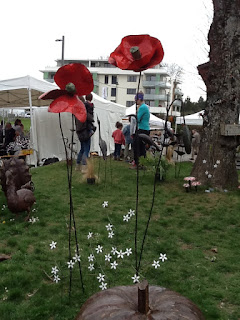 These metal poppies were about two metres tall and I would have loved them, but at €110 a pop I couldn't justify it, so I came away with three tomato plants and three broccoli plants - who says I don't know how to throw my money around!  Still, it was a pleasant way to spend the weekend after all this rain and it finally feels like spring has sprung. Oh and my weight? I don't want to talk about it!!!!!