Up and down like a bloody yo-yo, that's me. I mentioned before that I had lost four lbs over the Easter week when I was sick and knew full well that I would put them back on because it was obviously just water loss. Of course I did put weight back on - three lbs to be exact but that still left me five lbs down on my starting weight so I was happy with that. Then at the end of last week I had lost two more lbs, then weighed myself the next day and had put three back on, and then the next day five down!!! Crikey - are you following because I'm having a hard time of it! In the end I weighed myself Saturday and I was down two lbs, for a total of seven lbs over my starting weight. I was really hoping for some weight loss as I had been really good all week with trying to stick to 1,200 calories a day and having exercised in some form or another every day last week. I think the moral of that story is don't weigh yourself more than once a week isn't it!  So, onwards and upwards (or downwards, hopefully)!

On the decluttering side I did pretty well last week too. I took two bags of clothes to the local consignment store where they took seven dresses (four with the labels still on them - what was I thinking) and they said to come back with the coats/suits later in the year. I also put three woolen winter dresses in the charity bin near home - I quite liked the dresses but hadn't worn them all winter and with my ever-growing belly they tended to make me look like a mobile sock so out they went. I also took jewelry - most of which I had bought at the market in Turin last year - down to the charity shop in Geneva one lunchtime, which was a good excuse to get in some walking. It's weird isn't it though that no matter how much stuff I seem to be throwing out some little gremlin sneaks out in the middle of the night and fills those gaps back up. Huh! I have set gremlin traps but haven't managed to catch any so I will just have to continue to keep an eye out for them I guess!

And it finally feels like spring is sprung (at last), with the tulips and daffs in particular bursting out of the ground and the pollen seeming to settle endlessly in my eyes and nose. It's not as bad as it was but it still affects me, sadly. Funnily enough I didn't really start suffering from hay fever until I hit around 40 and then it was miserable for about five years, after which it calmed right back down. Now I seem to get the occasional "red eye" and itchy nose but it's much better than it was. I have a friend who used to suffer terribly from allergies, the whole permanent red eye and runny nose, the lot. Now I know a little of how she felt!

This weekend a friend and I trotted up to a place called Châtillon-sur-Cluses for a vide-grenier. She picked up a lovely painted metal watering can and I got these lovely serving dishes for €3 the pair! Lovely aren't they? I know, I know, I'm supposed to be decluttering but I couldn't resist these! 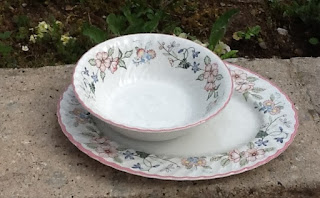 Actually there is a lot of this kind of china about - particularly blue and pink floral - and I love it, but I have to be reasonable, even though I know I could go nuts for it!

After that we went down the mountain to a place called Marnaz where a local craft exhibition was on. It was only small but there was some beautiful stuff there. Not all of it was for sale - my friend was particularly interested in a beautiful quilt and a painted wooden scene, but unfortunately neither were for sale.


After that we headed down to a local garden centre to pick up some plants. I tell you, I could spend a fortune in these places as the stuff was just so lovely. I bought a few plants to replace the dying plants I had rescued from my ex's place a couple of years ago, plus decorative outdoor plants, some strawberry and fennel plants, and a couple more tomato plants. Local lore has it that you don't plant delicate plants out round here until after the Saints de Glace (which is around 15 May). You may as well listen to the locals because I have ended up throwing so many young plants away when I thought I knew better! So I put the delicate plants outside during the day and will keep bringing them into the house at night for another couple of weeks.

It's weird actually because I have been reading so many blogs lately where the ladies are on the run up to retirement. All being well I am planning to go myself in 2020. The big sticking point for me is getting my mortgage paid off because without that I can't retire, my mortgage being too large a chunk of my prospective pension. Still I reckon I can have that paid off nine years early in spring 2020 and after that, "Bob's your uncle" as we say in England. I can't wait because although I am not unhappy at work and do indeed have nice colleagues I feel it is time to move on to other things, and seeing all the wonderful crafts produced in these exhibitions I suspect I will wonder how on earth I managed to fit everything in when I was working! Fingers crossed!