Last weekend they had forecast nice weather for the Saturday and then "iffy" for Sunday. By the time I got back from England they had had tons of rain and not being able to cut my grass before, I swear it looked like I lived in the Serengeti! It gets to me when things look a mess so I was determined to get all caught up with the housework, washing, ironing, and so on and then decided that just in case it was going to pee down on Sunday I had better get the grass cut as well. I must be mad!

I don't have a very big garden but the part at the end, which actually looks like it belongs to me, is in fact a fireman's access right of way. It runs round the back of all our houses to allow access to firecrew in the event of an emergency. It is also, supposedly, to be maintained by its owners, the local HLM bank, but who, in the 27 years I have lived here, have never set foot on it (nor indeed, ever set foot on it according to my neighbours). In order not to look like we live in a pigsty therefore, we homeowners have always maintained our respective parts of it. Actually, we are in the process of negotiating buying our individual plots off the HLM (ongoing as we speak) in order to prevent them from potentially putting in an access road to any future housing developments that might be built in the fields above us - but that will most likely be the subject of another post).

Anyhoo, I nearly snuffed it cutting that bloody grass. It was so hot and so heavy once all that wet grass hit the lawnmower bag. Never again in that heat I can tell you although, like I said, I really wanted to get that crossed off my to-do list before it got any worse.

So, having got everything I wanted done on the Saturday I decided to go up the mountains to visit my son and his girlfriend to drop off some paperwork. They bought the sweetest little kitten a couple of months ago, and while I am not a cat person, this kitten is absolutely bonkers. 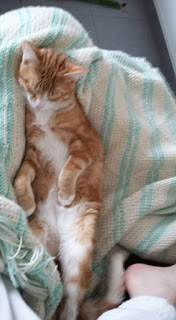 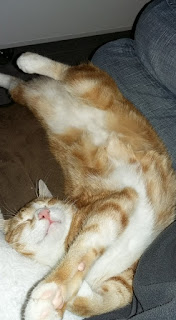 Up until recently they had been keeping it in the house, but then he got adventurous and went out onto their rather large balcony, really curious to have a good look around. Anyway, Jen decided to throw some bread out for the donkeys in the field right next to them, at which point Leni pulled himself up to his full 8 inches and 5 ounces and took a flying leap off the balcony to try to catch the bread. My son said to imagine the song "I believe I can fly" being sung and Leni flying off in slow motion looking like this:

He said it was sooooo cute - and then they had to dash off in hot pursuit! I'm not sure Leni will be content to stay around the house too much longer.

After we had left them we decided to go down to a local vide-grenier (car boot, to all intents and purposes). The only difference is that they tend to be organized by the local communes so there are always food and drinks stands, and often much more (as this time, a bouncy castle etc.). It was being held in the local village of Arenthon.
It's not the biggest nor the best but it was nice. Trouble is it was again scorching hot - the heat only being made bearable when the wind picked up - and boy did it pick up. It came in great gusts so people were having to hang onto their parasols and stuff and the men behind the bar were actually holding down its metal roof at one time, just in case it flew off - which obviously would have been very dangerous. We had just ordered sausage and fries when the wind caught mine and I ended up with a lap full of mustard and fries - not quite the look I was going for but I wasn't the only one that got caught out, I suspect.

While I didn't actually need anything (do you ever?) and going totally against the grain of getting rid of stuff, I actually picked up a few sweet little bargains for the grand sum of €8 - four wine glasses, a bonbonnière and two water glasses. I am well pleased with them! 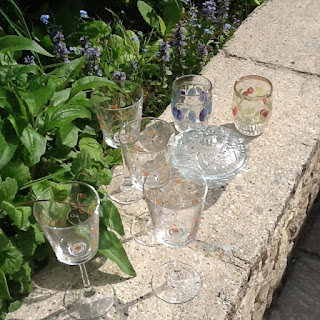 Trouble is, the vide-greniers go on until October - oh dear, I guess I shall have to work a little harder on the decluttering - or we could just consider it "recycling" in that I borrow this stuff for a while for about eight euros before getting rid of it at the next vide-grenier. Well that's the plan anyway. Still, all-in-all quite a lot of fun can be had for a few euros don't you think? Better than mall shopping anyway!
Posted by Treaders at 18:40