An evening at the theatre

A couple of weekends ago, after the recent sadness of my mom's passing, it was nice to spend a few hours "getting away from it all" at the theâtre. It was the Geneva Amateur Operatic Society (GAOS) who, yet again, put on an excellent performance - this time of Chitty Chitty Bang Bang. 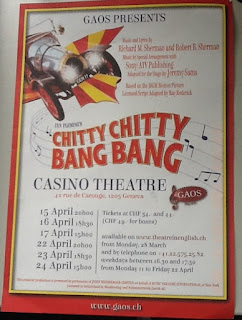 My friend and I tend to go to the Saturday night performances as it is less of a rush for us than going during the week. I have to admit though that I wasn't overly enthusiastic about this one because I don't have particularly great memories of the film - I don't know what it was, but I found the film didn't make much of an impression on me as a youngster, though I have no idea why!

We decided to go anyway, and I have to admit I was more than pleasantly surprised.They put on an excellent show as always and I found myself really enjoying the story. The children performed superbly and certainly held their own against the excellent performances from the adults. For me, the villainous Baron Bomburst, Ruler of Vulgaria, was just outstanding (picture a Mel Brooks kind of character on crack cocaine) and of course the role was an absolute dream for him.While I have no acting talents or ambitions, I couldn't help thinking what a gem of a role that was for someone to camp it up to the hilt - and he certainly did so!

I have to say though, that I was also amazed at how "Chitty" performed! I have no idea how they managed to create a "magic car" but they certainly pulled off an extraordinary feat in the props department - it was amazing. I suppose if I wanted to get involved with something like this group it would be "in the background" as I think it would be just fascinating to see what goes on behind the scenes.

Talking of "behinds", during the interval I went out to get a drink and one unfortunate lady walked passed me holding a young boy by the hand but with about two feet of toilet roll hanging from the back of her jeans! I went to call out to her to let her know but just at that moment there was a surge in the crowd and I lost sight of her. The poor thing - you can only imagine how mortifying that would be. A couple of minutes later, however, she came back in my direction and I was able to attract her attention to let her know. I mean, it wasn't just a little piece of toilet paper - it was almost reaching down to the ground! She of course was horrified (I guess it's like walking out of the ladies with your skirt tucked into your knickers), but, as I said to her, not to worry - if she's lucky she will probably never see me again!