So now it's over and we all got to say our final goodbyes to mom - and what a lovely service it was!

I flew back to the UK last Sunday in order to spend a couple of days with a friend who retired to the Cotswolds. I flew in to Bristol (a first - and a last for me, I think) because it is a smaller airport and closer to the Cotswolds. It's not that I have anything against Bristol of course but getting round the city - on the wrong side of the road for me!! - with all those bloody road works/diversions, etc. was a flaming nightmare. Go ahead, ask me anything you like about Bristol Cathedral - anything - I must have passed the bloody thing at least 10 times and while it is indeed beautiful I really wasn't there for the magical mystery tour! Eventually, however, I managed to make my escape from the city's tentacles and made the 90 minute drive to Lechlade where my friend lives. And again, just like in Wales previously, I had forgotten just how pretty it is.


Of course it was lovely to see my friend and her husband again but the weather also cooperated fully and it really was quite stunning. Their home is a 300-year old cottage with all higgledy-piggledy walls and vertical stairs and absolutely lovely. They also have the daftest dog - a lurcher - who hasn't realized she is the size of a small bus but acts like she is the size of a small pug. But still, a lovely pup indeed.
We took﻿ my one-and-only day in the Cotswolds to visit the lovely neighbouring town of Burford, and again it was absolutely charming - and not particularly crowded considering it was 1st May.
U took me into her "favourite" shop, and I have to admit it was just like a rabbit warren - a never-ending maze of nooks and crannies. AND - get this - they also had an oldy-worldy sweety shop selling the old fashioned sweets that I remember from my childhood. Chocolate limes, butterscotch - oh it was just heaven, although I'm not sure my dentist will thank me for my indulgences later!
On the Tuesday I drove down to Dorset for mom's funeral, which was to take place the following day. And you know, while it was sad, it really was all right! I mean, she hadn't been in ill health, she was 94 and happy, and she just sat down and went to sleep. Who wouldn't want to go like that? I know I would.
All five children were there, with just two out of her 10 grandchildren not being able to make it from Denmark. My kids flew in from Geneva after work on the Tuesday night and made it to Dorset at 2 a.m. and then had to fly back out after the funeral on an 8 pm flight - but I am so glad they were able to make it.
My sister, who had made all the arrangements, had chosen a semi-religious service as we are not a religious family, and the celebrant had taken the time to sit with my sister and her husband and write down some of their memories and stories. In a case like my mom's I personally don't think the aim is to make people cry, and I have to say that having the celebrant read out some of the silly stories during the service was lovely, and certainly cut the tension. I mean, how about when we went to visit Corfe Castle and my mom scrambled up the hill on all fours to get up to the castle, only for my dad to point out afterwards the pathway which she could have used (and was just out of sight) - I don't think she spoke to him all day after that!
﻿
After the ceremony, my other sister was telling us that when she was preparing to move to Denmark nearly 40 years ago mom had told her to buy a TV in England to take with her because that way "she could get all the English channels too"! I mean, how lovely is that!

The music was also beautiful and I think the only thing that made any of us a bit wobbly was on the order of service they had put a picture of mom and dad in uniform during WWII and as we said our last goodbyes they played Vera Lynn singing "We'll Meet Again". What a lovely choice, but it caused a few tears I can tell you. 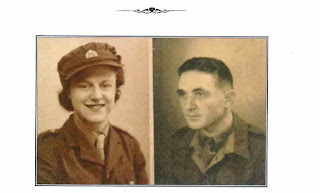 After that we went to the marina for refreshments and then those that could make it went back to my sister's house afterwards, although some had flights to catch and had to dash off. And there we spent several hours telling all the old stories (as you do) and laughing - which in a way is why I am writing this blog because I want those stories to remain for those that are left behind. Can there be a better tribute? 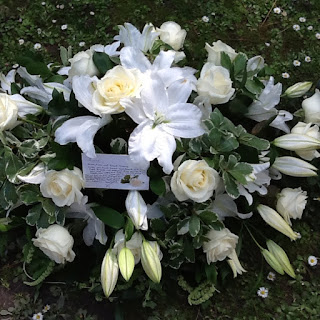