When I was a little girl I remember being entranced watching the French series "Belle and Sebastian" about a little boy and his Pyreneen mountain dog (Belle). I can't recall much more about it except the stunning scenery and the fact that it was French language with English sub-titles. I remember asking my mom if they really were speaking another language or was it just gobbledy gook, and she said "oh gobbledy gook I expect"!!! Anyway, from that day on, I wanted (a) Belle, and (b) to speak gobbledy gook.

I did get to speak gobbley gook eventually, as much from my love of languages as from the fact that if we didn't go down the "languages" route, we would have to go down the "sciences" route, so it turned out to be the lesser of two evils, as you can see, 'cos me and sciences just didn't see eye to eye.

Anyway, although at the time I never did get a "Belle", when I was a young teenager we somehow managed to twist our parents arms (by asking them when they were half asleep) and ended up with a lovely border collie mutt.

Now border collies really are working sheep dogs, of course, not that ours ever had to work a day in his life, but we loved that old mutt anyway. But now, eventually, I have gotten to see my very own "Belle". Well it's not mine of course, but for the first time in the 27+ years I have lived in this house, the farmer has put sheep in the field behind the house. He initially had dairy cattle when we moved in and then alternately raised donkeys and horses (beautiful to see them running on a sunny day), but as of about a couple of weeks ago, we must have 100 sheep in the field behind us! 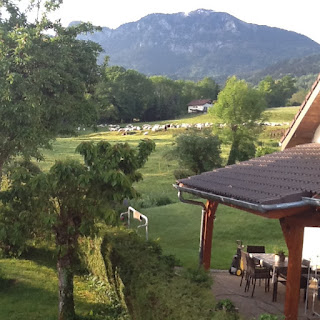 And, they have got their very own "Belle"! 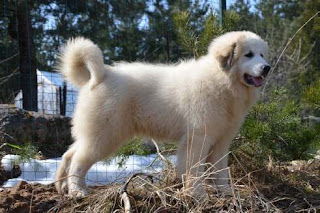 They call them patou in French, but they are effectively Pyreneen mountain dogs. It has been lovely to watch how he protects his flock, but I was amazed to learn that these dogs are essentially nocturnal by nature. They are fiercely protective but incredibly gentle with the little ones. To watch how Belle herds the sheep up the mountains is a sight for sore eyes. And the weirdest thing happened the other day. While sheep of course bleat and baaaa, and they have their "cowbells" on them at all times, when Belle was herding them further up the mountain they made the strangest groaning noise, the likes of which I have never heard before. It was a really loud, spooky sound - a bit like the noise I make at the thought of another gym class, but multiply that by 100 sheep!

I don't know how much longer they will be staying on the field behind the house, but 50 years later I am so glad that I finally got to see my very own "Belle"!
Posted by Treaders at 15:55