A weekend of celebrations

My youngest son is 24 today, so I had asked them a while back if I could invite them over to dinner sometime to celebrate his birthday. I completely understood that they might want to be with their friends on the Saturday night (I mean, who wants to spend a Saturday night with your mom when you can be with friends right?) but he and his girlfriend sent me a message on Friday and said "how about we go out tonight to celebrate his (upcoming) birthday and Mother's Day"?  Mother's Day in France is always the last Sunday in May, while in Switzerland (where my other son lives) it usually falls mid-May.

So on Friday night we went out to dinner at the one-and-only restaurant in the village where I live. The food is good, the people are friendly and the views are spectacular so what's not to like!

The weather hasn't been great (indeed it was pretty rubbish all weekend), so that was excuse enough for me to order my absolute favourite dish "tartiflette". 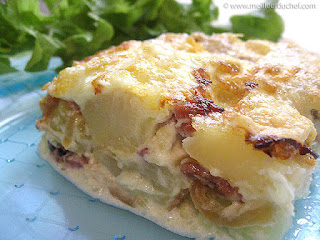 It's pure stodge really but eat it with a salad (to feel virtuous) and a selection of dried meats and for me it is pure heaven. Jordan is (finally) developing a taste for cheese and chose a lovely goat's cheese and honey salad and Jen had a burger, which is something new for this restaurant as they are not a "burger joint", but she said it was very good anyway.

I often just pop up to their place on a Sunday for a little while but it was really nice to spend an evening with them "down here". As Jen had lived with us for about three years anyway many of their friends are local to me, so after dinner they went and called in on some of their friends from the village - a nice bunch of kids I have to say.

Since Sunday was Mother's Day they had brought me a present and I am absolutely thrilled with it! I sent a picture of "Daisy" the cow to OH and he came back saying he thought it was a clown. Bear with me, he is having his cateracts operated on in a couple of weeks! 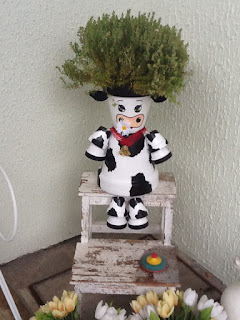 Isn't she lovely! I had nipped out to the garden centre and bought the thyme for my garden but I think Daisy looks rather great with her new haircut - something about her hair puts me in mind of James Brown, although I'm sure his hair didn't smell of thyme!

On the Sunday it absolutely peed down but my friend and I did make the effort to trudge out to the garden centre and then on to another local vide-grenier. It was such a shame as a lot of effort goes into putting these events together and it really was pretty much rained out. We did treat ourselves to merguez and chips though and to be honest trudging round in the rain didn't really phase us too much as we are both Brits, but I did feel sorry for the event organizers all the same.

And so, on to today, it really is Jordan's birthday. I can't believe he is 24 already.You know, I remember very much when he was a baby and toddler, but after that the years just seem to have flown by. If anyone knows how to make time slow down (or keep it in a bottle as the inimitable Jim Croce would say) please let me know how you do it. It is so lovely to look back over those times but they are gone before you know it.

So happy birthday Jordan. Quarter of a century next year! 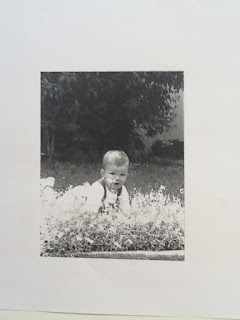 As a post script, I'll leave you with one of Jordan's little gems. I have shoulder length brown hair with a slight wave in it. No matter what I have tried to do with it over the years it always comes back to looking like "shoulder length brown hair with a slight wave in it", so in the end I just gave up. When Jordan was about 10 he suddenly looked at me one day and said:
J     "Oh mommy, you're so lucky, I really love your hair"!
Me     (stunned) "Well thanks sweetheart, it's really nice of you to say that".
J     "Yeah, I mean, you look just like Simba in the Lion King!"
While that may have burst my bubble, hey I'll take compliments wherever I can find them!﻿