More this and that

Don't forget to put your handbrake on! On Tuesday night I caught the bus from work back to the border to pick up my car at the Park and Ride. When I got to my car, I realized that the car behind me had parked literally up against my rear bumper. I took a photo on my phone and decided to pull my car forward to see if any damage had been done. So I pulled my car forward a few feet, put the handbrake on and immediately the car behind slammed into my car again. It was then that I realized that they must have forgotten to put their handbrake on and it was only my car that was stopping it from rolling forward. I had a course that night in Cluses (about an hour's drive away) and in any case I wasn't going to hang around until whatever time the other driver showed up, particularly as there was no damage to my car. As I pulled out of my parking spot I pulled over to put my seatbelt on and heard a terrific thud; when I looked round said car had rolled out of its spot, picked up speed and slammed straight into a Renault Espace, pushing it into the wall in front and had now come to a complete stop blocking one of the lanes round the parking lot (although there was another exit route). Bloody hell! Luckily there was no-one in the car's path. I didn't really know what to do so I buzzed the parking attendant on my way out and left my name with him just in case. On the way home I was, I suppose, feeling a bit superior thinking how I would never do something so stupid when a car on the motorway pulled in front of me and put his hazards on - I had forgotten to put my headlights on! What an idiot I am. But then, when you are in a lit up parking lot I suppose it is easy not to notice that you haven't got your headlights on - just like it might be easy to forget to put your handbrake on when you are in a hurry. I hope there wasn't too much damage to either car though.

And talking of parking lots, a friend of mine had an appointment for medical treatment in Geneva last week, so she drove to the parking lot early afternoon in order to hop on the bus to go into town. Out of the blue a "swarthy" looking lady carrying a map tapped on her driver's window. Stupidly (her words, not mine) she rolled the window down, and at that point two "swarthy" looking men appeared at the passenger side, one jumped into her car and grabbed her handbag, which was on the passenger seat. When she yelled at him to get out, the two men held her down while they took her bag - which contained her wallet, her passport, her driving licence ..... you get the picture. Understandably she was very upset and frightened - as would I be - knowing that while these b@@@@stards were probably only interested in the money, they now had her home address (and most likely her house keys as well).

Unfortunately (for us) we now have a large influx of Roma gypsies (hence the reference to "swarthy") and you can say what you like about tolerance, but they really are *!*!*!*! You see them begging all over town now, with "begging" being the least of their antics. I once spotted a woman with a baby in arms begging, only to see the same baby with a different woman the next day. And they can and do become aggressive. Again unfortunately, there isn't much the police or anyone else can do about them. A friend told me sometime ago that she always threaded the seatbelt through the handle of her bag when she was driving. I now do the same, or put it in the trunk and keep my doors locked. What a sad state of affairs we are having thrust upon us though.

On another note, I have a friend coming over from the UK for the weekend. I met Brian on my first solos trip to Turkey a few years ago and we have remained in touch. When I sent him a message not to worry about snow gear as we have warm weather and sunshine he replied that he was disappointed as he had actually been looking forward to snow (me not so much!). It reminded me of the time many years ago when I was going to drive into town to go shopping after it had just snowed. My friend asked if she could come with me so we set about struggling to put snow chains on. Now in the advertising for snow chains at that time they always showed some bird in a pink sweater and manicured nails putting the bloody things on in about 10 minutes. 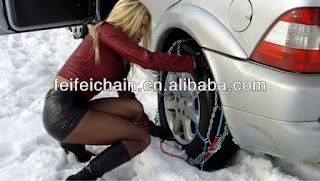 The reality, however, was that after struggling for about an hour, we looked more like this (although maybe not as skinny): 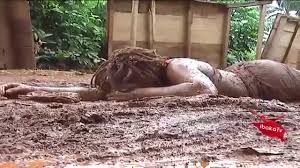 But get the bloody things on we did, only to turn a corner out of our housing plan and discover that the roads had been ploughed and gritted and there was no more snow! Never again I tell you, if I have to put chains on I ain't going.

And finally, at Fat Fighters on Wednesday night, disappointment as I had lost nothing at all. Bugger it. I was disappointed because I felt I had actually been pretty good about following the programme and exercising ..... but apparently my body didn't agree. Since I consider myself to be pretty "hormonal", I noted the date and will watch out to see if there is a monthly pattern. Still, I'm not too discouraged. I will just have to try to get it down next time I go, which will be in two weeks' time as I am back to the UK next week for a funeral. Time will tell I guess.