Another weekend come and gone

Well my visitor Brian arrived from England on Friday night. Traffic getting home was awful and then I finally cottoned on that spring break is upon us in certain parts of France and the skiers are starting to arrive. For the schools they have three separate "zones" and each zone gets a different two-week break, hence we have the majority of our tourists arriving over the next six weeks. I guess that is good news for the resorts, who have finally had some snow, while for us it isn't too bad as long as we remember to take the back roads at the weekends and avoid the tailbacks on the motorways.

We had dinner Friday night with a friend in the one and only restaurant in the village. This restaurant changed hands a few years ago and I have to say the quality has improved greatly. Dinner was good and the view from the restaurant is just stunning. Then on Saturday I had planned to take Brian to a hot springs around 150 km from here. By taking the "north" side of Lake Geneva you get the most amazing view as the motorway snakes up the mountain for a spectacular shot of the lake and Montreux taken from near Vevey (where Charlie Chaplin made his home). They have a little motorway cafe at the highest point so we stopped and ate there to take in the view. Considering it was a motorway cafe the food was bloody expensive (but good), so I guess in reality we were actually paying for the view more than anything.

Another half an hour and we were at the hot springs of Lavey les Bains.  I had discovered this place some years ago after a friend recommended it. In fact, when my family came out one New Year's we spent the evening of the 31st at the springs and then drove back along the south side of the lake, stopping in Evian for a drink and a wander before heading home.  It was actually one of my favourite New Year's ever, as it had turned cold and we all looked like sea monsters swimming through the mist created by the hot springs.


The thing is, you can spend a few hours in there relaxing and getting pummeled by the strong water jets and you end up feeling battered, bruised and very wobbly but supremely relaxed afterwards. I felt like I had been doing Jane Fonda's workout over and over again when in fact I had just been slouching around in the water for three hours. 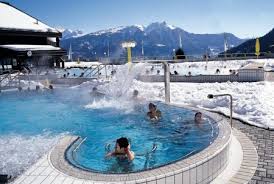 After that it was back home and dinner in our local town, again a real treat.

The next day we weren't so lucky with the weather but since Brian wanted to go back to Annecy I was happy to oblige, despite the fact that it was pouring down and the wind was howling. I suppose on the positive side, Annecy doesn't get so crowded when the weather is bad!

We spent a few hours wandering round Annecy, stopping for a coffee (oh and a piece of cheesecake for me - Weight Watchers be damned for this week) before heading back home for a cup of tea and a chat and then heading back to the airport. 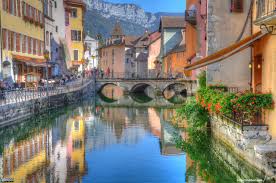 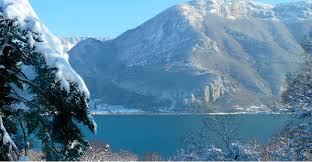 We certainly managed to squeeze an awful lot into one short weekend but I know Brian enjoyed it and it was good for me to do something "different" from my normal weekend routine.

Then it was back to sewing club number 1 last night, which is always nice, more so for the chatting than the sewing but hey, that's life.  I will miss Fat Fighters weigh-in this week as I am off to the UK tomorrow for my sister-in-law's funeral.  A flying visit - arrive in Wales on Wednesday and back to France on Friday.  Sad times.