What a terrible shock we all had this week.  My lovely sister-in-law, Brenda, died totally unexpectedly on Tuesday.  We are all in shock, as she hadn't been ill and was, seemingly, in good health.  From what I can gather, she was taken ill while preparing dinner on Monday night with what turned out to be a stroke.  Luckily my brother was there with her and was able to get help immediately.  Unfortunately she then had a second, massive stroke on Tuesday morning and my brother was told that she wasn't going to make it.  Their sons were just able to make it to North Wales to be with her before the end, for which I thank God and hope that she realized they were all with her. She died without regaining consciousness on Tuesday evening.

To say we are all in shock is really an understatement.  She was 69 and, like I said, seemingly in good health.


Bren had been a part of my life for as long as I can remember.  My brother is 17 years older than me so he and Brenda were married while I was still very young.  I remember watching Bewitched as a child and thinking that Brenda looked so much like "Samantha" (Elizabeth Montgomery), except that she was dark and "Samantha" was blonde.

She and my brother had raised their sons and, having both retired, were starting to travel and enjoy life to the full.  I guess that's why it seems so sad.  Some people seem to spend their lives in front of the TV watching actors living their fake lives, not realizing that life is there to be lived, not absorbed off the TV. 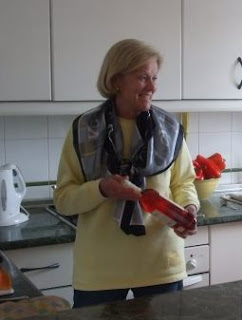 I had another friend whose mom lived to be 101, still living on her own in central London. My friend really did live life to the full - in fact I have no idea where she got all her energy from.  But then this friend developed cancer and died also at the age of 69.  I always felt like she was "cheated" because she was someone who seized life with both hands and her "good" genes just didn't pan out.

I know life isn't fair and never will be, so all I can say is carpe diem, or seize the day. You never know what tomorrow holds.  RIP Bren.