Well the weather here continues to be amazing - it really has been a wonderful Indian summer - and so it seems strange to me that when I call my family in the UK they are up to their eyeballs in rain, wind and storms.  The latter, frankly, is more what I would be expecting, as it is our weather that really is oddball (although not to last much longer apparently).

On Saturday I took myself off grocery shopping for the first time since my son and his girlfriend moved out and it was really weird.  I mean, I have so much foodstuff at home already that I actually didn't need anything, but I do enjoy going to the market.  I only spent a grand total of €5 - wow talk about Mrs. Rich (if you've got it flaunt it is my motto). I think the fruit and veg stallowner wondered what had hit him when I spent so little. After a quick tootle round the supermarket I stopped in at my friend, Stan's, little bar for a coffee, and if it is nearing 1.30 pm when he closes up for his siesta I usually hang around and give him a ride home if he doesn't have his car.  While we were chatting his wife, Martine, pulled in to let him know she was going mushroom "hunting", so I jumped at the chance to ask if I could go with her.  I have never been out mushrooming and had always wanted to give it a shot.  Now most people will only tell you where they go mushrooming with the proviso that they get to shoot you afterwards as they will never give away their "secret" spots, but Martine said "sure, let's drop your groceries off at home and we can take my car".

As we left Stan called after her to take care when out mushrooming and not to forget to take a jacket!  Now city-slicker me thought "how sweet, he wants her to take care and doesn't want her to catch cold".  So while I had visions of us gracefully strolling through green fields in flowing dresses with our little "mushroom baskets" full to the brim, the reality was quite different.  Martine told me to put hiking boots on as although it was dry it would be wet up in the mountains because of the streams.  She then proceeded to put on her bright yellow "high viz" jacket, with me thinking "well that's not going to keep her very warm is it"! Of course the light bulb moment wasn't long coming - it's hunting season, we were in the woods and we needed to be seen (see what I mean about "City Slickers" or as Homer Simpson would say "dohh"!).  We did hear gunshot and while I was told later that they are not allowed to hunt on Saturdays they seemed to be ignoring that particular rule so it was better to be safe than sorry.

Another thing about being a City Slicker is that I am unfit and know it, so while Martine gradually plodded her way uphill looking for mushrooms, I kept having to pretend I had found something interesting just so I could stop and catch my breath!!!!  In fact, for most of the time, all I could see ahead of me was Martine's backside and high viz jacket - see if you can spot her waaaay ahead! 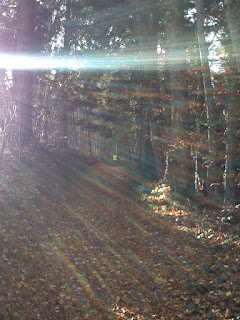 Then of course, another good "trick" is to stop and take photos of the mountains. 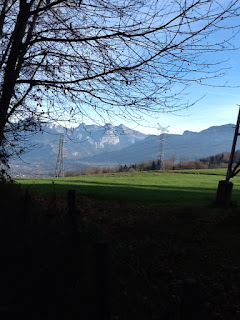 I think she eventually rumbled me and slowed up a bit.  Well we didn't have much luck at all.  I know nothing about mushrooms and Martine wisely says she only picks what she knows well.  I don't know about elsewhere but here in France you can take any mushrooms you find into a pharmacy and they will tell you if they are edible or poisonous or whatever.  They are fascinating though and when our next "mushroom" exhibition rolls into town I shall have to go visit.

As I mentioned previously, my son and his girlfriend have finally moved into a small place of their own but as I have been working late and not wanting to drive up those mountain roads in the dark, I waited until Sunday to drive up for my first visit, and it is lovely.  Only one bedroom but they don't need any more for the time being.  It has already served them well as my boys' band were playing in a concert in Lyon on the Friday night of the atrocities in Paris and since my oldest son lives in Switzerland and the borders were already starting to be battened down he spent the night on their sofa. 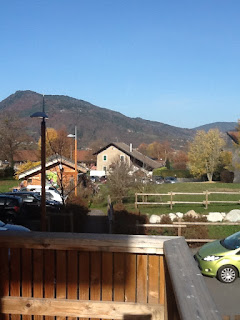 This is the view from their rather nice balcony and while the mountain opposite may not look that high, we are already up at 800 metres on a plateau, so you can see it really is a very pleasant little village.

Of course the downside was that the borders between France and Switzerland were really ramped up when I set off to work on Monday - two hours to get in to work and three to get home!  Not that anyone was complaining of course.  People were very good natured and the reinforced security was reassuring.

As for the Indian summer, it is about to end, although we have had a good innings, I have to admit. This is a picture I took from my bedroom window on Saturday: 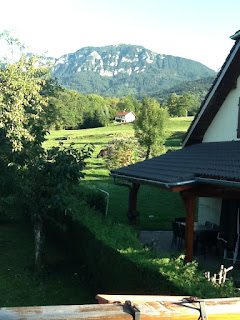 and this is what is headed our way on Sunday: 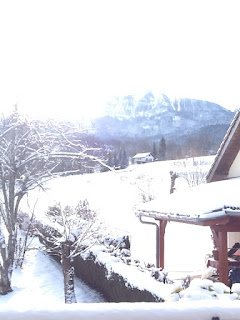