My dad suffered from heart disease from a pretty young age.  I'm not exactly sure but I think he had his first heart attack around the age of 48, when I was in my early teens.  It was a very traumatic time for all concerned of course, all the more so since he then went on to have a triple by-pass in 1974, at a time when that operation was a really major intervention.  Horrible, horrible time, but thanks to the skill of the surgeon and the hospital staff he survived and even though he subsequently had more heart attacks and another by-pass he lived to the ripe old age of 85.

Now all that is just the background to today's post really.  Around the time that he first got sick, it was decided that he should have all his teeth out since bacteria entering the body through the gums can infect the heart and do serious damage.  (To any medical personnel out there, please excuse the ah-hem paraphrasing here, but that is how I understood it).  So dad had to have all his teeth out and in those days false teeth was the only option, there either wasn't the possibility of implants or they were just way beyond his budget.  But dad hated those false teeth and to be honest, they spent more time wrapped in a hanky than in his mouth - and boy did the lack of teeth make him look old when he took them out.

Anyway, one day he had been sitting on the sofa when his hanky/teeth fell out of his pocket and ended up down the back of the sofa.  Now we had an adorable mutt - border collie mixed with goodness knows what else - and said dog proceeded to jump up on the sofa and go "fishing" down the back of it - only to emerge from its inner depths with the most perfect set of knashers - courtesy of the NHS!  Not the same dog but he ended up something like this:


Now that really was hilarious!  Another time, dad got up to get ready to go to work and rather than put his teeth in he just grabbed them from the glass on the bathroom window sill where they were twinkling away adding to the posh feel of the bathroom and again put the teeth/hanky into his pocket and set off for work.  The only trouble was, by that time mom had also lost her teeth and had a complete set of matching false teeth twinkling away in the bathroom window.  And - you've guessed it - dad picked up the wrong teeth! Mom was furious as she had to go to work and of course as soon as she tried to put her teeth in they wouldn't fit - because they weren't hers obviously!  So she had to catch the bus into town (about a 30 minute ride) to get to my dad's place of work so they could exchange teeth.


I think dad was in the dog house for quite a while after that.  But at least we got a good giggle out of it!  And to be honest, I'm glad we now have the option (albeit a very expensive one) of having implants should we ever lose our teeth.  Running to the loo in the middle of the night to find someone's teeth staring at you in the darkness can do serious damage to an impressionable young mind I can tell you! 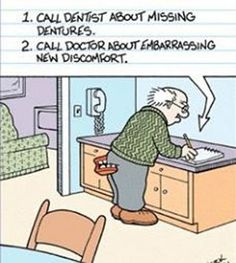