It is not easy to get hold of poppies for Remembrance Day here in Geneva, but I am lucky enough to have a colleague who was able to get some from the UK Mission, so am proudly wearing my poppy until next week.  A colleague from Honduras asked me what the poppy was all about, so I explained to her that it was a symbol of remembrance for those who fought in all wars, and a way of raising funds to help the injured and the families of former combatants from all conflicts.  I guess it was initially meant as a reminder of the "war to end all wars" (WW1) but sadly the "war to end all wars" didn't turn out to be that and so many more have lost their lives or been injured since.  I believe, the poppy was chosen as the symbol because of its red colour reminding us of the poppies in Flanders Field - full of poppies but also flowing with the blood of the young men who died there.

I showed her the pictures of the wonderful display at Windsor Castle - so beautiful and to my mind a shame that it couldn't be permanent, but then I suppose if it had been a permanent display people would not have appreciated its beauty. 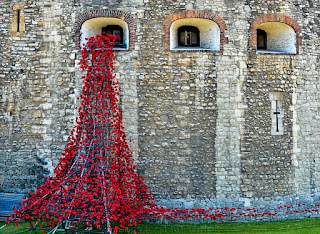 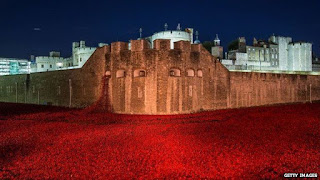 From what I understand, that display has been dismantled and moved on to other sites around the UK. I hope so, as it truly was a work of art.

Being of that generation, my dad and his brothers served in WW2.  In fact, my paternal grandma had 3 sons who (I believe) served in WW2 - my dad, my uncle George and my uncle Phil.  I'm not sure about uncle George's background, dad I know served in Europe and uncle Phil had part of his foot blown off in Singapore.  My dad's dad served in WW1 and was wounded in the Dardanelles, from where he was shipped back to England.  He died a few years later as a result of his injuries.  My grandma was then left a widowed mother of 6 children from a poor background, but was lucky enough to meet and marry a good man with whom she later had two more children.  As dad said, he was as good a father to me as I could ever have wished for - a compliment indeed, particularly in those awful times. 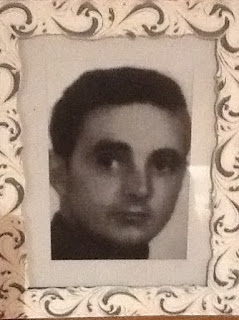 Actually, I would like to get hold of duplicates of my dad's medals.  I have been told that I can get them through the British Legion, so I will have a shot at getting copies of both his and my grandad's medals.  I have a little bit of information regarding my grandad - a press clipping giving basic information about his service in WW1 - so if anyone knows how to go about doing this I would be very grateful for any info.

On that note, I wish you all a safe and happy weekend, where we will hopefully all be able to show our gratitude and respect to those who went before and gave so much!
Posted by Treaders at 15:27