And so the Cup is over!

By "Cup", I mean the rugby world cup.  I just love rugby and really enjoy the four-yearly treat which is the world cup.  I suppose because it only happens once every four years it makes it more special, like the Olympic Games or the football world cup. Either way, I love it.  I think one thing I really enjoy is the fact that in rugby the games really do seem to be unpredictable. Sometimes you think "oh they'll be a walkover" and it's quite the opposite. In 2007 (I think) Argentina made it to the semi-finals and they were all amateurs, you know, bank managers and accountants back home.  And this year, Uruguay also fielded a mostly-amateur team, but made it to the cup anyway. And I love the fact that it is fast and rough but that the giants of players who all tower over the ref actually listen to and respect the guy - who is - usually - only about 5 feet 4!


and very deservedly so, but even more impressive (for me at least) was the behaviour of Sonny Bill Williams during their victory parade.  For those that missed it, a young lad jumped over the fence and ran out to the team, only to be promptly decked by a security officer.  Sonny Bill went over and comforted the lad, walked over so that they could have pictures taken together, and then, amazingly, took off his medal and put it over the boy's head!  I think the pictures speak for themselves don't you? 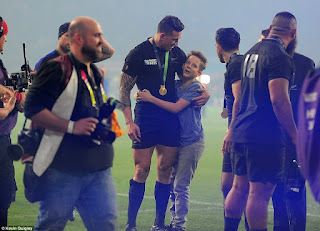 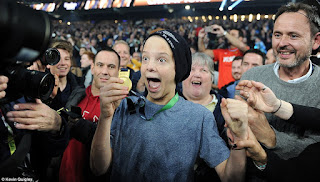 Lovely sportsmanship and the look on the young boy's face is priceless.  (Now in the unlikely event that I ever won a rugby world cup medal, I may just have magnanimously had my picture taken with the young lad, and may just have put my medal round his neck but then .... when reality set in .... I would probably have chased him down the field, tackled him with a flying scrum and got my medal back, but then maybe that's just me - selfish B that I am).  But what a lovely gesture by a gorgeous man (and that fact didn't go unnoticed either)!

And talking of sportsmanship, I remember watching a match many years ago (I think it was South Africa against Wales), when a Welsh player was absolutely clobbered in a tackle by his South African opponent.  While play carried on towards the try line, the South African player turned and saw that the Welsh player was still down, so he left the play and ran back to him, took his gum shield out and turned him into the recovery position, staying with him until the medics got to him.  I believe the player was ok in the end but that display of sportsmanship has always stayed with me.

The nice thing about rugby also is that, unlike at football matches, supporters are free to sit anywhere they want in the grounds, as there is no inter-fan violence.  When my younger son played we got tickets to see England/France in Marseille, and the two of us ended up sitting down the "French" end, the targets of much banter from the French fans. When my then 10-year-old son turned round and answered them in perfect French (despite us wearing our England shirts) they were absolutely gob-smacked - and the joke ended up being on them!

The few years that he played were great for us as a family too.  Ok it was a lot of running around but the atmosphere - particularly at tournaments - was lovely and very family-oriented.  In fact, one of my son's friends, D, grew up to be a man-mountain and has just been signed for Oyonnax Club as a professional at the young age of 20!  I can't believe this was the little boy who used to come over to play with my son - I mean, he is just an absolute giant now.   Makes me feel very old.  D has already played for France against South Africa in SA as an under-21 so here's hoping he makes it to the big time.  They certainly deserve it for all the hard work they put in, I can tell you.