Has anyone been watching the documentary series Fake Britain?  Along with other programmes like Hugh's War on Waste and Watchdog, I really enjoy this kind of programme.  Love Matt Allwright too, and his war on rogue traders.  I think he seems to have the perfect personality for this kind of programme and (in my opinion anyway) he is very watchable! 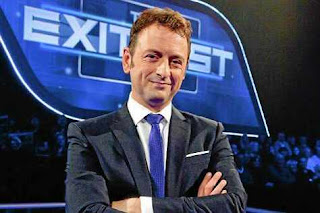 Anyway, I watched Fake Britain this week and what an eye opener it was, not so much for what they were exposing as fake but the prices some people were (seemingly) willing to pay for the real McCoy. I mean, Customs had seized counterfeit cosmetics with a street value of around £12 million I believe. Some of the items seized were supposedly brand name cosmetics bags - you know Coco Channel, Yves St. Laurent stuff - small make-up pouches containing, say, a mascara, lipstick, some eye shadow, maybe some blusher - and the prices on these pouches, marked as though they were legit, were from £450 to £600!!!!  I mean, even if they were real who on earth pays out that kind of money for a couple of items of make-up?  I just could not get my head around the fact that if these goods hadn't been intercepted some fool might have been tempted to buy them at, say, a knock-off price of around £250 - for a couple of items of cosmetics.  I mean, what's wrong with Boots or Rimmel?  And even if they were legit, would they have been any better than the stuff from Boots, etc. to reflect their retail price?  I don't think so.  It was just amazing.

When I was thinking about it, I thought maybe someone might not see anything wrong with paying a few pound for one these "knock-off" items - I mean, we all like a bargain right.  But one of the officers explained just why these goods are so dangerous.  The lipstick, for instance, contained paint stripper to make it run smoother!!! And the mascara contained some form of acid-like chemical to stop it from clogging! Can you imagine putting that near your eyes!

They then went on to showcase knock-off batteries/chargers, for laptops, for instance. Now I'm not quite sure of all the "technical" terms but they said that while all batteries are capable of catching fire, the knock-off versions are so much more likely to catch fire and then proceeded to put several of them "under stress" to show the effect.  The last battery they did this to had flames leaping about 3 feet into the air.  The officer then went on to say that this exact scenario had happened a couple of years ago on a flight from Hong Kong to London (just after the flight had landed), and invited viewers to imagine what might have been the outcome if this had happened mid-flight. It really made me think I can tell you.

I also got to see Matt in action last night on Watchdog where one of the scams they showed was a call centre purporting to help people find work, when in reality the aim of these scammers was to keep their poor victim on the line for a minimum of 14 minutes in order to rack up phone bills of almost £30 per time.  Just last week I got a message on my answering machine regarding a "delivery they had pending for me".  I actually did call the number back and it was some scheme where they wanted to send me a case for my mobile phone.  In fact the call automatically cost €3 to start with plus however long they could keep me on the phone I guess.  Luckily I hung up immediately and don't think I will be returning any calls again, but then it can sometimes be difficult if you are expecting some kind of delivery anyway.

And you know, you and I may think we are smart enough not to be taken in by scams - and I'm sure we are for the most part - but very often these people are very practised in what they do and we will probably all fall for it sometimes, however street-smart we may think we are.  Hell, I was robbed by a gypsy in Barcelona right under my nose .... but then they don't come much more "practised" than them do they!
Posted by Treaders at 15:25