I got an email this morning from the Direction Nationale de la Gendarmerie in Paris because apparently I'd been "caught looking at child pornography" on my computer. They kindly gave me 72 hours to respond to their email with all justification as to why they shouldn't go ahead and prosecute me! I guess it makes a change from the widow of the former Director of Finances at the World Bank in Ouagadougou who wants to put $10 million in my bank account right? I know I shouldn't, but more and more I write back to these jerks and tell them exactly where they can shove a cactus - and then I block them! I guess it might get me into trouble one day if I fire that off to the wrong person, but since I've never looked at child pornography I'd guess I'm pretty safe on this one! Which reminds me of my brief foray into online dating in 2010 after my husband left (and yay me, I'll be divorced 10 years next week)! As a woman of a certain age you do tend to get some guy who looks like a gorilla sending you his picture with the caption "I'm just what you need"! I guess they think all divorced women over the age of 50 are just gagging for it, right, and while it never happened to me I knew of other women who received unsollicited dick pics. An Irish friend of mine replied to one such gem with "that looks like a penis, only smaller", but I did see a text message which I thought was pretty good and saved just in case - although thankfully that never happened to me! Still, if it could get rid of World Bank widows and accusations of looking at child pornography I'm up for most things! 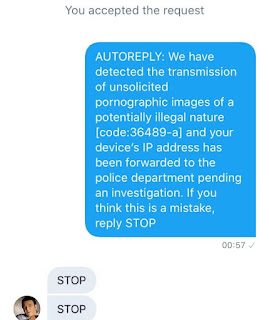 Oh and I meant to write about the North Shropshire by-election last week but somehow it slipped my mind. Wow and just wow! The Tories (Conservatives) have held the North Shropshire seat for almost 200 years so I guess you could say it was considered a safe Tory seat - until now! It came up for grabs when Bojo's crony, Owen Paterson, had to step down in a cash-for-influence scandal and I guess the Tories were so confident it was a safe seat that they ran a candidate who wasn't even from the local area and didn't know anything about it. So the seat went to the Liberal Democrats with a fairly convincing majority - and the Conservatives are running pretty scared, what with all Johnson's screw-ups in the last few weeks/months/forevers! Not that I think it will make much of a difference in the long run because there seems to be no front-runner candidate to replace Johnson - and no real opposition from either the Labour Party or the Lib Dems! God helps us, but it's the same thing here in France. Macron has not, as yet, declared as a candidate for next year's Presidential election and yet the other night he was on TV for over two hours patting himself on the back so hard for all his "achievements" he almost dislocated his shoulder - a move that pissed off the declared candidates because as a candidate they are all bound to have an equal amount of air time - and yet Macron, as an as yet non-candidate, is getting to use the airwaves as long as he wants! The elections will take place in spring but I have no real hope that we will get rid of him. I think it will be either him or his female clone, Valérie Pecresse, that will get in because they've got the big money behind them. It's sad as there are other candidates (and I know who I would vote for if I only had a vote - which I don't), but I suspect they won't be able to counter the deep pockets of Macron's backers! It's just awful to think we might be looking at another five years of more of the same - or even worse!

And finally, I met André at Ford this afternoon as he was dropping off his car to get winter tyres put on. When we got back to the house he told me that he'd just learned that yet another colleague had dropped dead last week of a sudden heart attack!!!!! Wow, if people were unsettled before I can only begin to imagine how they are feeling right now! Time to look for another job maybe?