You'll be glad to hear that the post title has nothing to do with Boris Johnson for once (although it's pretty appropriate, all the same)! No, the other day quite by chance I stumbled across a Youtube interview with a man called Randy Rush, who won $50 million (Canadian) in 2015 and has seemingly used that money to benefit many individuals and charitable causes. Google describes him as "an author and social justice advocate". Whether that's true or not, he certainly came over as a very likeable man. He wrote a book called 13 Billion To One describing his megawin, and while I've downloaded a sample I haven't actually gotten round to reading it yet. More interesting to me, though, is another book he wrote called Bloodsuckers. It is the story of how a couple called Jeremy and Amy Crawford - a couple he knew through Jeremy's father before he won the money - used him and his money in one of their many "marketing opportunities". According to Mr. Rush, this couple were con artists of the highest order and he outlines their various rackets in great detail going back as far as he can! They created businesses, pyramid schemes, luxury magazines that never published an issue and conned mainly "little people" out of money they could ill afford to lose. When Randy won the big one they must have felt they'd hit the jackpot and, I believe, did indeed con him out of a significant amount of money. I haven't finished the book yet but I understand he got some of it back and wrote this book to set the record straight and hopefully bring them down (if that hasn't already happened)! As I say, I haven't finished the book yet but it is just amazing the bare-faced lies this couple told to ordinary folk and got away with for so long! I'm not sure which televangelist it was that begged his stool pigeons to "send however many dollars you can because otherwise I fear God will call me home" (apparently God called him to prison instead)! It's a bit dry as a book, mainly just detailing the cons, but I go to bed to read most nights and think whaaattttt????? I probably shouldn't still be surprised that this BS exists - but I am! 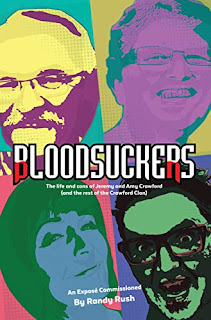 It took a while but I'm finally feeling my energy coming back after covid and sinusitis. I'll whisper this but I think I may also be over the sinusitis too - but don't tell anyone as I don't want to jinx it! So with that I've started putting up my Christmas tree/decorations - something I hate doing actually - but needs must. I guess it says more about me that I prefer taking them down than putting them up, although I really do enjoy it when it's all decorated!
And remember my writing a while ago about collecting stamps from the local supermarket in order to buy bath towels at what turns out to be about half price. I lucked out when a gent handed me a whole packet of stamps so ordered grey and white (they only had those two colours) bath towels and hand towels for André and Jordan and Jen. Well I got a message from the supermarket to say that my order was finally in, but when I stopped in to pick them up yesterday the lady apologized and said that the truck had got stuck and only the grey towels had come through and did I want to wait? I told her I'd wait as it was easier to pick up the whole order in one go, but I had to laugh at the lack of tenacity - true grit, if you like - of the white towels seeing as how they just wimped out while the grey towels made it through!
I mentioned earlier that one of the side effects (of covid?/sinusitis?) was that I lost my sense of taste and smell. I have to agree that something might have been off with my sense of taste because I made two different soups this week and I reckon both of them were capable of either blowing my brains out with the chili in them or sending my blood pressure through the roof with the amount of salt I used!
Then yesterday I finally got to see the Munchkin. I'd put it off for a couple of days because of the snow but yesterday I decided to go over there and take the shorter, mountain route as I really think I was starting to become a wimp re driving on the snow. I'm glad I did because it was fine! Okay, you don't go belting round any bends if you've got any sense, but the road was ploughed and very driveable so I'm glad I didn't wimp out on that one. When I got there Charlie had just woken up from a really long sleep. Jen asked if I would hold him while she got on with some stuff but mentioned that he'd been a bit lethargic as he'd been constipated for a couple of days. No problem, we just sat and watched mom going about her business, when all of a sudden there was a humongous "ripping" sound and I reckon Charlie suddenly didn't feel quite so lethargic any more! One thing it did confirm to me, though, is that my sense of smell has very definitely come back! Ah, God love 'im!
Posted by Treaders at 21:15