I've been off-line for a few days (like most of us, I suspect) as there were things that needed doing, like family to see and food to eat, but first of all I'd like to thank all the lovely lady bloggers who sent me Christmas cards. It's such fun to get a Christmas card from half way around the world (mine were all from the US this year), but to those who received cards from me, I have to apologize for my handwriting. I think we started learning beautiful cursive writing pretty young - and then somehow someone forgot lesson two! Oh I write in cursive of course (I'm not that bad) but I have to admit my hand-writing is dreadful, so sorry about that!

Christmas Eve we had a small "raclette evening" at Jordan and Jen's (which I suspect will be where most of their festivities will be held while the babe is so small). There were only six of us plus the babe and it was really nice. After dinner we played a board game (can't remember the name), but I have to admit that I tend to zone out a bit after a while so I usually offer to take care of the babe (well that's my excuse and I'm sticking to it)! It's hard to explain but we obviously play games in French so it can be a bit like asking a French person to mime "Cheech and Chong", or an American to mime "Eric and Ernie" (or anyone non-French to mime "Louis de Funes" - you have to have been brought up in the culture), so I guess you can see why my mind tends to wander. Or maybe we should stick to card games - now there's a thought! That being said, I used to zone out a bit playing Trivial Pursuit when I lived in the States because I know bugger all about baseball or American football (or Cheech and Chong, for that matter). Anyhoo, one time I decided I was going to cheat next time so spent a while memorising questions and answers for "the time when". Anyway, I can't remember what the question was now, but I remember the answer was Sandy Koufax - and I almost gave my father-in-law a coronary when I gave the Koufax answer to a question about baseball!

Getting home that night wasn't much fun though as it had frozen pretty hard by the time I left (the parking lot was dreadful) and I wasn't looking forward to the drive home. Basically you can go one way round the mountain through a place called Findrol (which is an accident black spot even on a good day), or you can go "the other way" down the Giffre valley which is well known for accidents involving deer and wild boar! Well actually you can go over the mountain past André's place but that goes back down the mountain on the side of a ravine so I decided to give that a miss! It seemed to me that everyone was taking it carefully on the way home though and thankfully I didn't run into any "strays". Once I got back down to Bonneville it was back up another mountain again to where I live (and where, again, you have to look out for the animals). There was a guy behind me most of the way from Bonneville to home and I thought I was holding a good speed, but when I got to my turn off point he blasted his horn and yelled something which I'm pretty sure wasn't Merry Christmas so I reckon I might have been driving a bit too slow for him, don't you (although that could just be female intuition)! Still I did get a little schadenfreude when the eejit hit a spot of black ice about 100 metres away and bounced merrily over the sidewalk a couple of times until he managed to get the car back under control!

Christmas Day was at my place and again there were just five of us plus the babe. I can't believe he's already nine months old and has had his first Christmas! I kept my kids' high chair all these years but when I dragged it up from the basement to clean it I couldn't find the table part for love nor money! I know I wouldn't have thrown it away and just kept the chair but .... Still, it worked out well enough as it was the perfect height for him to sit at the table with us and throw green beans around with gay abandon! Of course presents meant nothing to him but he got an awful lot of pleasure trying to eat the wrapping paper and any empty box he could get his hands on! I thought Jen was very good though because she made a point of saying that she really didn't want him to be spoiled (neither do I) and how did we feel about giving just a few presents in future and sewing gift bags instead of buying wrapping paper? I'm all for it - though I'm not sure how Jordan and André feel about the "sewing" part!

The next day Jen sent me a notice from their local Mairie. Apparently there had been a very strong smell in the surrounding area and along the river Giffre that had entailed around 100 firemen being called out looking for a gas leak, so they called André and asked if they could move in with him for a couple of nights if necessary. I told André they could come here but he'd have to have Leni the Horrible Cat! It wasn't necessary in the end but the smell did linger for a couple of days and everyone was asked to check their fuel tanks for a possible leak. I'm not sure what happened but I think it's been sorted now (or at least I hope so)!

Jen's mom very kindly invited me to her new place (she moved in two weeks ago) to spend NYE with her and her boyfriend, Fabrice, as she didn't want me to be alone. I thought it best to be honest and thanked her for her invite but told her that I genuinely dislike NYE and dislike being on the roads even more. That's when she said "but my friend Niko will be here too" and the dreadful thought occurred to me that she might be trying to set me up with Niko. Ehhhh, no thanks. I've met Niko and I'm definitely not interested, any more than I'm interested in being set up with anyone, thank you very much! So I'll be spending NYE all on my lonesome (and very happy about it too), while Jordan and Jen are having a couple of friends over and André is going to a friend's in Geneva and spending the night!

On another note, I'm now 14 lbs down (and very happy about it) as I still haven't really got my sense of smell or taste back. I had to laugh on Wednesday when I went grocery shopping because I walked out of the shop having paid just €14 for my groceries (I usually spend around €100), but nothing seemed to appeal to me. I'm guessing I'll start putting weight back on soon enough and goodness knows I'd like to be interested in cooking again, but in the meantime bread and cheese seems to be the extent of my culinary expertise at the moment. Mind you, I'm sure Weight Watchers is probably an infinitely preferable alternative to weight loss from catching covid! And to think of all that walking I did and got absolutely nowhere with the weight loss (1,200 miles in 2021 - definitely needs improvement)!

My nephew sent me an email the other day (after I'd been whinging about the state of British politics) giving me the name of a book - whose author he knew slightly - and which was quite a best-seller, telling me that it might give me a better understanding of just how dire all three political parties now are in the UK! I'll have to look it back up again when I've finished my current read!

The book is hard-going and a bit like wading through molasses but occasionally I like to really get my teeth into something like this. I had hoped to get it in hard copy but apparently it's only sold in electronic format because at the end of each chapter there's a "QR code" where you can update your copy for more up-to-date information!

After a couple of hours of wading through that I decided I needed something a bit more light-hearted (ya don't say!) and ended up watching Being The Ricardos - the Lucille Ball/Desi Arnaz story - and I really enjoyed it. Man, they were a firey couple, but so well-suited - when they weren't scratching each other's eyes out. For some reason many people don't seem to like Nicole Kidman but I thought she was very good, and as for Javier Bardem (who played Desi), well that man could just stand there and not say a word and I'd be happy - but he actually can act! 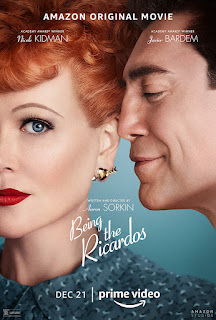 And finally, I was chatting with my sister on Christmas Day and we got to talking about just how hard mom had it on Christmas Day (in particular) and wondering how on earth she managed with all those kids, that tiny kitchen, three pots and pans basically, and no appliances! We had a good laugh but I had to ask her if she thought maybe we were glorifying the past and oddly enough she said "no, I don't think we are. We were much poorer but I actually think we were maybe happier"! And I tend to think she was right!

So on that note, I'll wish you all a happy new year and hopefully 2022 will be kinder to us all!