Things haven't exactly been quiet here but nothing particularly interesting has been happening either. The weather continues to be pretty crappy - moderately warm but with daily rain and even violent storms several times a week! I went to my Italian lesson the other night and as we walked out the most god-awful storm started so my teacher and I hung back for a while to see if it would pass over. When it didn't we realized we had no choice but to make a run for it - but man was that an interesting 45 minute drive home! It was lashing down rain and between that and the darkness it was really hard to drive. The person in front of me was going particularly slow and the eejit behind me was getting his knickers in a twist, revving his engine like crazy, obviously convinced that was all that was needed to make everyone go faster! It's not like he had to wait more than about five minutes before he could pass anyway, but I guess that's one person who has never heard of hydroplaning! 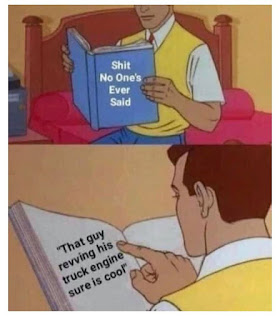 I usually take the low road home but even when I was on my way to my lesson it had already started to flood so I stuck with the motorway all the way. Damn, I hate those kinds of storms - and I hate eejits like the one behind me even more! I mean, you don't only have to worry about floods, what about the trees they bring down huh? Crikey, what happens when you find this thing in the middle of the road as you're roaring past overtaking everyone - you'd end up with a pretty severe headache right!

At yoga on Monday she told us we were going to work on "our abdominal muscles" - all the while trying desperately not to look at me! It didn't feel too bad while I was doing it but I definitely knew about it later that afternoon. Damn, it's amazing how quickly you lose momentum when you take a break from exercising isn't it. On the way out Sylvie, who does the Monday and Tuesday yoga classes with me, mentioned that she was thinking about organizing a hike this time next year to cover the Traversée du Jura! The Jura mountains are to the north of Lake Geneva (the alps are to the south) and while they are very different to the alps and not as high, they are still very beautiful. So thinking "oh that might be something to look forward to" I asked her how long the "hike " was. When she said 400 km I nearly fell off the bench where I was sitting putting my shoes back on! My first reaction was "well that's a definite no then", but in the spirit of not saying no right off the bat, I think I'll save that for next week! I just know I could never get fit enough to do that in a year but ..... never say never, I guess! 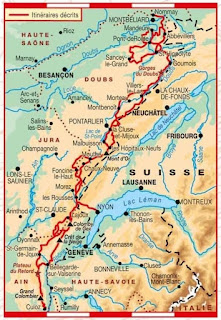 One of the routes for the Traversée du Jura! 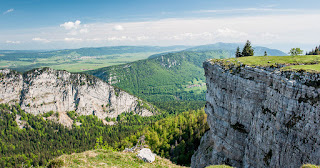 I have also been back to the gym trying to get back into the swing of things but damn, is it hard work at the beginning. I made a fool of myself last week though because I went in the afternoon instead of the morning and as I walked in I called out bonjour to the guys behind the desk - only to realize that a group of ladies were in the middle of a yoga lesson right there and I hadn't spotted them! Then, since the changing rooms have opened back up, I thought I'd go use the bathroom before heading upstairs. I thought something had changed when I went in, but only discovered what it was when a young man from the front desk came running after me to say I'd walked into the men's changing rooms! Damn, I may be getting older but I hadn't thought I'd reached that stage just yet! They have an expression in French which basically translates to "I hadn't taken the straw out of my clogs yet" - or, as we say in the UK, "you can take the girl out the country but ...."! I told André that on the programme of machines/exercises my trainer had set for me when I initially joined up, he had asked me to start doing a plank to see how long I could last. Frankly anything longer than a minute I count as a success, but André said I could easily cheat if I just rested up on my belly and boobs!!!! Hell, I reckon I could take both my arms and my legs off the floor and someone could just "spin me around" if we wanted to make things a bit more interesting. Still, I'm doing more than Mr. Critical over there aren't I. Actually he said once he gets settled into his apartment he might come with me and enrol at my gym, but since this is someone who considers exercise to be taking a bath then pulling the plug and fighting the current we'll see how that goes, I guess!
On Saturday some really fit people will be coming through here again as the Tour de France will be heading down from le Grand Bornand to Cluses through the local town of Bonneville - and clogging up the traffic quite nicely again, I would imagine. I saw in today's news that a local sheep farmer has nighttime footage of a wolf attacking his sheep so if Mr. Wolf shows up at the Tour de France that could make things interesting. Farmers have always claimed that there are wolves in these mountains (well something is attacking their livestock), but it is usually denied by the authorities, who probably don't want to admit it. Doesn't make sense to me since if there are wolves and bears in eastern Europe what's stopping them from moving in to western Europe also? Nothing right!
In other news, France has dropped pretty much 99% of its covid restrictions as from today - everything except masks when in indoor public places, and it's a nice feeling, I have to admit. I watched the England/Germany football match the other night in the Euros and surprise, surprise England actually beat Germany 2-0! Now that doesn't happen very often I can tell you. I'm not that bothered about football, to be honest, but it made a nice to change to watch England actually win something. I didn't find it to be the most exciting match though, but then I guess that would make me just one of thousands of expert couch potatoes wouldn't it, lying on the sofa eating crisps while doling out my opinion of where they went wrong!
Prince William and Kate took Prince George to Wembley Stadium to watch the match - which was nice - but I do wish they would dress him like a little boy occasionally, and not like some young schoolboy in starchy knickerbockers. Still, again, I don't suppose they care what I think do they!
And finally, I'm really moving on with sorting and decluttering - and it's now getting quite motivating. I'm still going through loads and loads of linens, sorting what's decent (and even still in its package) in case my son wants it, putting stuff in the recycling bin and ripping up more stuff for rags. I would say over 50% of it is what my ex left behind when he hightailed it back to the US in 2015 and left me to empty his rental. One thing I can't figure out though is how he had three beds and seemed to need 85 sets of bed linen for them!!! Damn, it's no wonder I had my work cut out for me!